I'm spilling all the sweet tea this time. 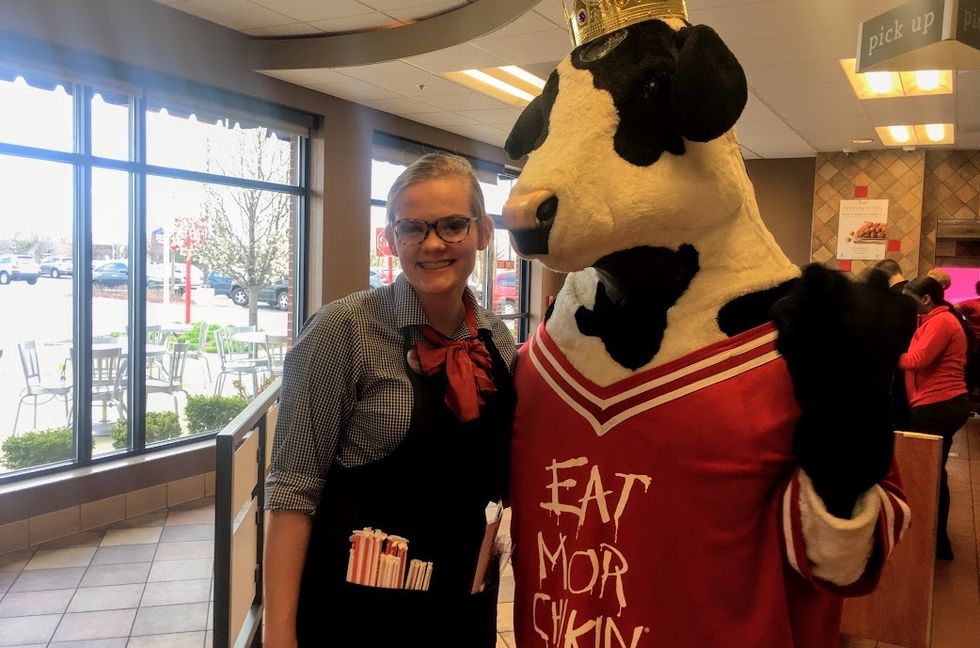 Whenever I tell someone I worked at Chick-Fil-A for three years, people always have questions about what it's like to work there. I think the most common question is whether or not they force the employees to say "my pleasure." The short answer is no, the long answer is, well, yes. Although the workers are not punished for not saying it, it is highly encouraged and honestly, it's hard not to say it when that's all you hear everyone else saying all day. The real question is, was it really "my pleasure?" Most of the time, it was!

With the exception of the unruly customers who complained about things out of my control, I really did love serving people on a day to day basis. Personally, I get very excited when I'm going to CFA to get food, so I knew that I wanted to make that experience smooth for guests coming in. Everyone knows that CFA workers are overly nice and many jokes about the workers being robots. Some of the time, it really did feel like that. Even if I was having the worst day ever, I knew that I had to put on a smile and try and make someone else have a great day.

Working the shifts when I wasn't in a good mood was honestly exhausting. Acting happy and upbeat for eight hours when you don't want to be can be mentally draining. I know it doesn't seem like a big deal to be really nice to people, but when someone is actually yelling at you because they were missing two nuggets in their 12 ct. nugget meal, enough is enough. There were several instances where I had to go in the back of the store because I was overwhelmed from customers, but needed to put on a happy face. I know this may sound dramatic but being overly polite to people that treat you as a worker and not as a human is just so annoying.

Sometimes you have to remind yourself, it's just chicken.

Moving on, the company as a whole was really great and I loved the people I worked with. Clocking in for an eight-hour shift with a bunch of your friends made it a lot easier and a lot more fun. I grew close to a good amount of the people I worked with and most weeks I saw them more than I saw my own family! I haven't worked there in nearly two years, but I still have group chats with a handful of my friends that I worked with (hi guys!).

After working there for three years, I received a scholarship from corporate that awarded me $2,500 toward my college education. To this day I'm so thankful for that generous award and it allowed me to save some of my money to spend on other things besides school!

Last but not least, the main reason anyone would want to work there, the thing that kept me going, the food. If you've ever been there and you're a fan of chicken, it's hard not to love it. After seeing how the food is prepared in such a clean environment and made with really fresh ingredients, it only made me love it more. The people working in the kitchen really have to put a lot of effort into making each thing that is served the best quality they can, and their standards are pretty high.

Overall, I would definitely say that working at Chick-Fil-A made me a genuinely nicer person in my everyday life. Learning how important it is to make a connection with people you interact with and treating everyone with dignity and respect has made a huge impact on the way I treat people. Did I love working at Chick-Fil-A? For the most part! Am I glad it was my first job? Absolutely. Chick-Fil-A taught me life skills at a young age that I will use for the rest of my life.