We may not be as "connected" as we think. 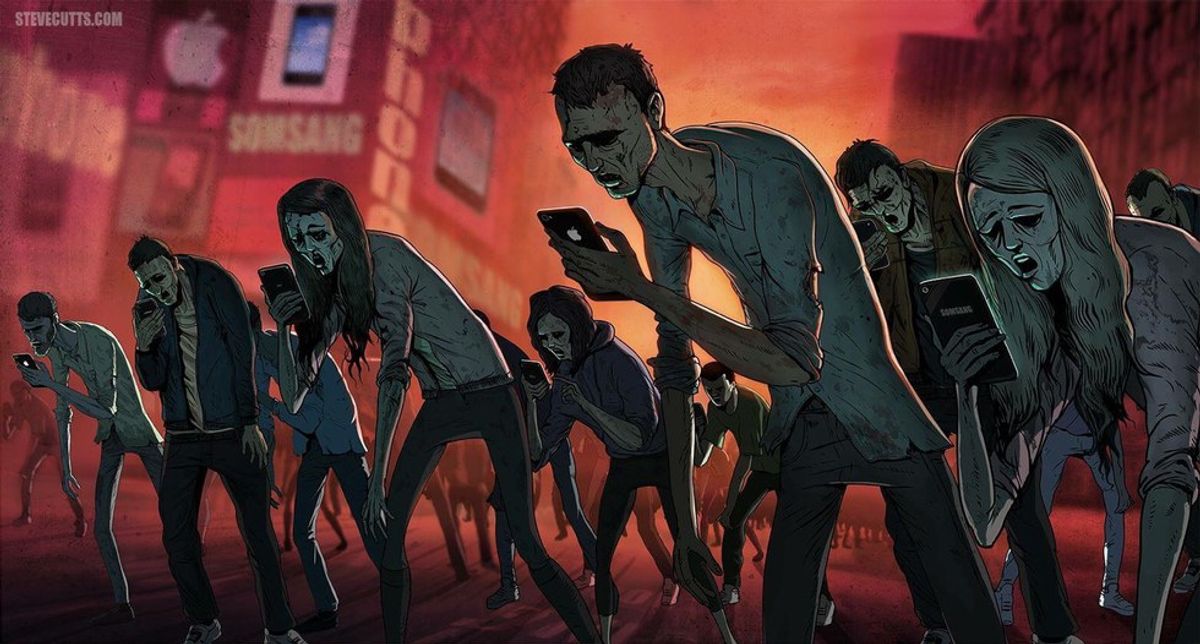 My name is Josh, and I am a social media addict.

Social media has given us the ability to do things that were unimaginable only twenty years ago. However, the excess use and misuse of these technologies is detrimental to our relationships and our brains. As someone who could easily spend hours staring at a computer or cell phone screen, I’ll be the first to say that I misuse and abuse social media. I “stalk” people on Facebook to draw comparisons between the quality of my life and theirs. I passively aggressively insult or “sub-tweet” people on Twitter, you know, because I have to prove to myself and everyone else that I’m tough, but I’m far too scared of confrontation to talk to the person I have a problem with in person. I’ll even attempt to boost my low self-esteem by trying to rack up “likes” on an Instagram selfie. It’s often while I’m doing these things that I’m ignoring the people around me, loved ones and strangers alike.

Both millennials and baby-boomers are guilty of isolating themselves in this way. Social media offers users the ability to constantly be “connected” to each other. Sites such as Facebook, Twitter, or Instagram give us the opportunity to display a revised version of ourselves that will make us appear to be more interesting, palatable, exciting, or happier than we really are. In the controlled, calculated, and counterfeit culture that we live in, the substitution of electronic connection for verbal communication is crippling social skills of teenagers, causing depression and anxiety among frequent users, and creating barriers between people that block true communication.

It's affecting how we communicate face-to-face.

Social media is having a negative effect on the social skills of its users, especially teenagers. According to a study performed by Tamyra Pierce, a journalism professor at California State University, Fresno, heavy use of social networking sites can be linked to social anxiety among teenagers. In the study, 280 teengaers were surveyed on how much social media they used daily. After collecting information on the teens’ use of these devices, Pierce then surveyed the same students asking them about their experiences with social anxiety. She found that the students who reported more frequent use of websites like Facebook or Twitter and other forms of electronic communication were more likely to report symptoms of social anxiety such as discomfort when talking to someone face to face. From the data collected Pierce concluded that, If we are glued to technology 24/7, it’s going to have an effect on social skills. It’s just natural.”

FOMO: We all have it.

Experts believe that social media use causes a phenomenon referred to as FOMO, or Fear of Missing Out, especially among teens. A survey taken by the Australian Psychological Society revealed that one in two teenagers suffer from FOMO. According to APS clinical psychologist Andrew Fuller, “Those teens who were heavy users [of social media] also reported higher levels of FOMO.”

Fear of Missing Out is being directly linked with the fact that anxiety levels of teens are the highest they’ve been in five years. The survey performed by the APS reports that 60 percent of teens have trouble sleeping after spending time on social media websites, with a similar amount reporting that they felt burnt out after constantly being connected.

A similar study conducted by a team of researchers at the University of Glasgow found congruent results. After surveying 467 students between the ages of 11 and 17, Dr. Heather Cleland Woods and Holly Scott found that students who were more active and “emotionally invested” in their use of social networking sites suffered more often from a low quality of sleep, depression, and anxiety. What is it that teens, or really anyone suffering from FOMO, are afraid they are missing out on when they are scrolling through vacation posts on Facebook or sliding through selfies on Instagram? According to Thomas White, a contributor for the Huffington Post, social media is used as a mask to make the user’s life much more interesting and exceptional than it really is. White explains all of the actions we perform to achieve this saying, “We accomplish this in a million micro ways. Everything from tweeting about the fun people we’re (and you’re not) with, to posting pictures of our delicious (and expensive) dinner.”

To some, it may not seem like a problem to be able to edit and cherry-pick the best parts of ourselves to display to our friends and followers on social media. However, the feelings of inadequacy caused by this digital “keeping up with the Joneses” mentality is causing depression among users of social networking websites. This mindset creates a culture of comparison. In this culture we will do anything we can to gain approval by meeting the standard of happiness and success that is determined by everyone else on social media sites.

Like circus performers competing for the attention and praise of our peers, we dramatize stories to make someone else look bad or gain sympathy, brag about expensive vacations or material possessions, and are willing to give ourselves a brain aneurysm over the lack of snowmen on a coffee cup. If we’re honest, our lives are not always as bad or as good as we portray them to be yet we feel the need to make ourselves seem more interesting by misusing social media in this way.

According to White, social media does not only give us the opportunity to put on masks, but it also allows us to put up shields. While masks alter our self-perception that is sold to our followers, the social media shield keeps us from having vulnerable and honest communication even with those we know and love. “The shield makes difficult conversations far more palatable than face-to-face communication,” says White. He goes on to say, “Avoiding personal interaction didn’t start with the advent of social media and technology, but it has become easier and more accepted when we hide behind our shield.”

Instead of having the messy or uncomfortable conversations that can bring fear and sadness as well as joy and fulfillment, we hide behind a small electronic shield in order to avoid an ugly or awkward confrontation. This hiding may take place in a variety of ways, like a teen locking themselves in their room to avoid conversations with his or her parents, or someone ending a relationship over a text message. In doing this, we block others out and numb ourselves down, living in a world devoid of real communication.

The problem with electronic communication is that it isn’t really communicating at all. Susan Tardanico, a contributor and writer for Forbes Magazine, reports that studies have shown that 93 percent of communication is non-verbal. This means that when “communicating” through social media and mobile technology we are only using the verbal seven percent. Simple letters on a screen do not communicate emotions. I can’t tell you how many times I’ve had to read over the same text message or Facebook post simply trying to figure out what tone of voice in which the writer was speaking in. Body language, vocal inflection, and facial expressions communicate so much more than just words alone.

Sherry Turkle is a professor of Social Studies of Science and Technology at the Massachusetts Institute of Technology. In her book, Alone Together:Why We Expect More from Technology and Less from Each Other, she explains why she believes communicating from behind a phone or computer screen is so much more appealing than communicating with someone face-to-face. Turkle says, “At a screen, you feel protected and less burdened by expectations. And, although you are alone, the potential for almost instantaneous contact gives an encouraging feeling of already being together.” While communicating from behind an electronic screen, we can feel like we are with other people without having to deal with the “expectations” of others immediately. Electronic communication allows us to communicate on a level in which we are in control of the environment around us.

It all comes down to personal responsibility.

When used in moderation, and for appropriate purposes, communicating via social media can have many positive impacts on the way we live and communicate. The amount of information we can share to millions of people at once can actually be life saving. Besides sharing life-saving information, social media is also a great way to connect with old friends or family who have moved away. We can share photos, videos, stories, and ideas with loved ones around the globe in just seconds. In and of themselves, sites like Facebook, Twitter, Instagram, or Tumblr are not bad things. What’s important to remember when using these sites is that communicating from behind a computer screen can never be substituted for face-to-face communication. When used correctly, social media can be a wonderful thing.

As social media and mobile technology are relatively new technologies to our world, only time will tell the long-term effects these sites will have on the way we communicate and relate to one another. In the meantime, we as users of this modern day technology can take it upon ourselves to participate responsibly. Be aware of how your own self-esteem is being affected by what you’re seeing online. Use sites like Facebook and Twitter to lift people up instead of tearing them down. Don’t be afraid to log off for a week, a month, or even a year to keep yourself from being overly absorbed by the internet. When you’re out with friends or family, put your phone away and just be with the people in your life and appreciate them. Unlike Twitter, they’ll still be there when your battery is dead.