Or even, the perfect repeat read, if you prefer. 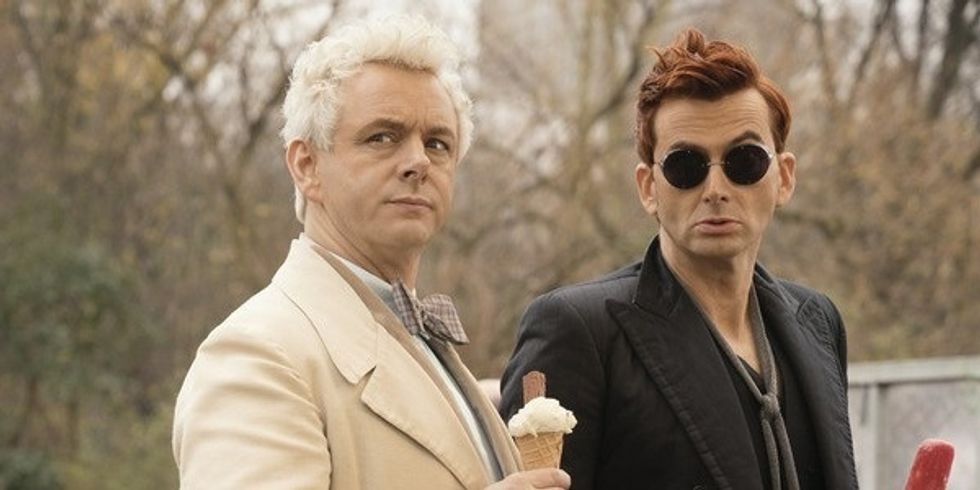 When Amazon Prime announced that they were adapting Neil Gaiman's novel, Good Omens, into a show, I was excited, but also scared. Gaiman's books are very popular, and while the adaptations of Coraline and American Gods were good, it is still always a hit or miss when it comes to book to movie or book to TV adaptations.

The trailers were promising and definitely grabbed viewers' attention with the chaotic wittiness of the show, so when it was first made available on Prime, I immediately started watching...

... And didn't stop until I was completely finished the series in one sitting.

The show is amazing, there is no doubt about that, but if you still need further convincing to watch it (although I myself am on my third binge), here are a few damning points, without revealing too many spoilers.

1. It perfectly describes "The Divine Plan," and why it's rubbish

The story starts out from the beginning, and I literally mean the beginning. While the story may seem to undertake religious tones and debunk the Big Bang Theory and evolution, it is only sarcastic.

The two characters, Aziraphale (an angel) and Crowley (a demon), find themselves often questioning G-d's choices concerning humanity. It all leads to when Armageddon is underway, and they go against their respective sides to undermine the entire operation and stop it.

2. It was perfectly  cast

There literally couldn't have been a better choice than to cast David Tennant as Crowley and Michael Sheen as Aziraphale. Their chemistry on screen is just so entrancing and I seriously need a spin-off of just those two characters!

3. David Tennant reprises his role  of playing a sarcastic, but deep down good-hearted, overpowered character with a slow burn romance with a blonde.

Basically, the book, the show, and both actors confirm that this is not just a story about Armageddon, but also a Romeo and Juliet-type love story where they both love one another but cannot accept that because they are supposed to be "mortal enemies."

5. The Ineffable Husbands may have their spats...

7. Not to mention quite possibly the cutest anti-Christ in popculture history

He just wanted to do good and fix the Earth and get rid of nuclear plants and save the whales! But, we all know that power can get to our heads.

8. The Hell Hound actually turns out to be the goodest boi of the whole  series

9. While she can be annoying, Pepper has no problem calling people out

It may be the end of the world, but Pepper has no room for your sexist remarks!

Crowley and his beloved Bentley bring classic rock music with them, especially an awesome selection of Queen songs.

11. Satan himself is played by none other than Benedict Cumberbatch

Well, voiced him, really. Benedict Cumberbatch is such a diverse character. I mean, he went from voicing the Grinch just a few months ago to now voicing Satan. Bravo.

The show may be scary to some, but at the end of the day, this sweet angelic bean makes everything better. We really don't deserve him.

Amazon Prime has done an excellent job with Good Omens. While the show follows the book, almost to a T, I do hope that with the popularity of the show, and the growing fanbase, they decide, that with Gaiman's guidance, to go beyond the novel and make a second season. More and more TV shows of books are doing it (like The Handmaid's Tale and even Game of Thrones), so why not?

There were several hints to where the series could go at the end of the finale if they were to decide to continue, so it's only a matter of waiting for some papers to be signed and Prime to announce they've been renewed...

But until then, you can catch me rereading the book and rewatching the series over and over again throughout the summer. When, or really, if, I will finally grow tired of Good Omens can't even be prophesized by Agnes Nutter herself.