10 Reasons Why 'Friends' Is Still A Good TV Show
Odyssey
CurrentlySwoonLifestyleHealth & WellnessStudent LifeContent InspirationEntertainmentPolitics and ActivismSportsAdulting
About usAdvertiseTermsPrivacyDMCAContact us
® 2023 ODYSSEY
Welcome back
Sign in to comment to your favorite stories, participate in your community and interact with your friends
or
LOG IN WITH FACEBOOK
No account? Create one
Start writing a post
Entertainment

10 Reasons Why 'Friends' Is Still A Good TV Show 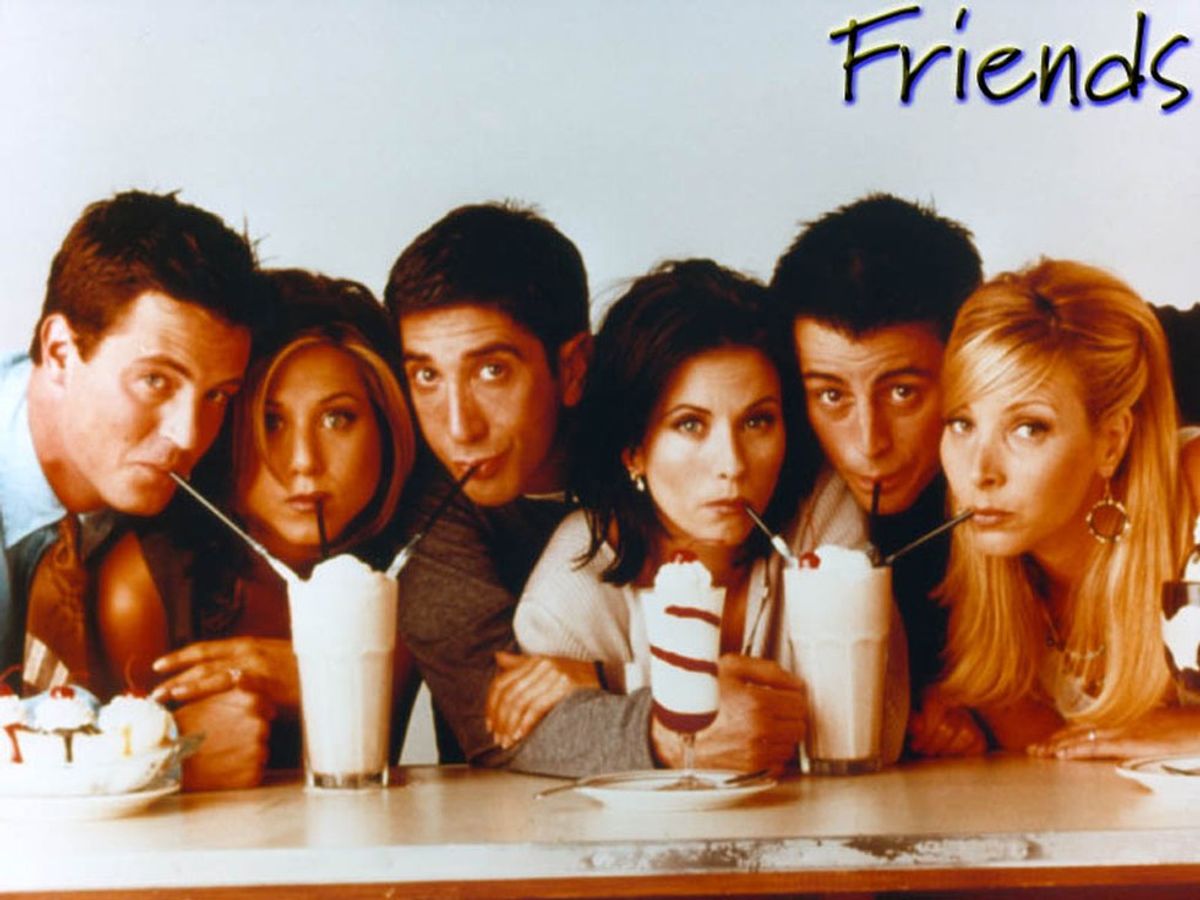 We all have that TV show that we can watch no matter what mood we're in. Maybe we don't list it as our favorite, but we still watch it religiously. I love TV shows. I get far too invested in characters and story arcs. I enjoy watching the changes a show goes through as seasons progress. I'm partial to comedies from the '90s. "Friends" is that TV show that I put on no matter my mood. It's funny and some of the story lines are actually really interesting on more than a surface-comedic level. These are the reasons why, in 2017, "Friends" is still a good show.

The physical humor Joey provides and the totally crazy scenarios the characters find themselves in are still funny, regardless of how dated the show is. The acceptance of Joey's bumbling buffoonery by his friends and their willingness to join in on moments with him make the show funny after seeing the same episodes again and again. When Joey's health insurance kicks back in and Phoebe is about to hit him in the head with a bat, Monica and Chandler jump right in. This almost unrealistic physical humor makes the show great still.

From Phoebe's nuanced ways to some of the stranger plot points, this show doesn't exactly depict the most normal set of friends in New York City. I love that about it. It's quirky in its own regard but taking it out of the '90s makes it more unique. It is rather unrealistic in many aspects; how Rachel and Joey make it in New York City is astounding. Gunther's creepy love of Rachel wouldn't fly under the radar in a modern show. This show's realistic setting but a slight lack of realistic moments makes it quirky and still totally enjoyable.

I can see every episode of this show multiple times and I never tire of Ross' antics. I will always pull Ross quotes in casual conversations with friends. I will always angrily pull up a YouTube clip of his you're versus your rant to Rachel. Ross is a little crazy and his dry humor and utter unawareness of his surroundings bring me joy. Ross can be angry and irrational, but his scenes are always comedic. He is often the brunt of jokes and he often finds himself in situations that could have been avoided, which makes this one of my favorite aspects of humor on the show. Ross had his moments where he sucked, like staging his own funeral just to see who would come, but overall his irrational anger and quirky love of dinosaurs makes this show timeless for me.

Joey is utterly incapable of making it in the adult world without his friends. He confuses his landline number for the amount of his phone bill when Chandler moves out. He often finds himself down on his luck and it's almost as endearing as a child. Joey is easily confused and often needs the guidance of his friends. His eagerness and loyalness are charming and his food-related comedy keeps the tone light. Joey is a character whose foot is often in his mouth and his story lines are usually hilarious. I could watch a whole show just about Joey and his antics. How can you not love a guy who puts a turkey on his head?

I will never get sick of Monica's obsessive tendencies. I love her strict cleanliness and confusion at how other people live. They're fun to watch and I'm sure if I had to deal with her in person I would be the one giving her sponges and such for gifts. I feel like the more I rewatch this show, the more I pay attention to her storylines. While Monica is nowhere near my favorite character, I think that she makes the show more interesting.

The friends could not be more different. They are from different backgrounds and have different jobs. On the surface sometimes it seems like they do not have much in common besides enjoying each other's company. I think that's why this show never stops being interesting. There are lots of little nuances and little subtleties in how characters interact with each other that make it interesting, even outside of its '90s popularity.

Nicole Marie Nigro
Individual Creator
3338
c1.staticflickr.com
Where to start...... Let me start with the cliche that life throws us curveballs and what we do with it is what counts.