Why Reducing the Gymnastics Team in 2020 is Absolutely Ridiculous
Odyssey
CurrentlySwoonLifestyleHealth & WellnessStudent LifeContent InspirationEntertainmentPolitics and ActivismSportsAdulting
About usAdvertiseTermsPrivacyDMCAContact us
® 2023 ODYSSEY
Welcome back
Sign in to comment to your favorite stories, participate in your community and interact with your friends
or
LOG IN WITH FACEBOOK
No account? Create one
Start writing a post
Sports

Why Reducing the Gymnastics Team in 2020 is Absolutely Ridiculous

As Aly Raisman says, "What's next, a team of one?" 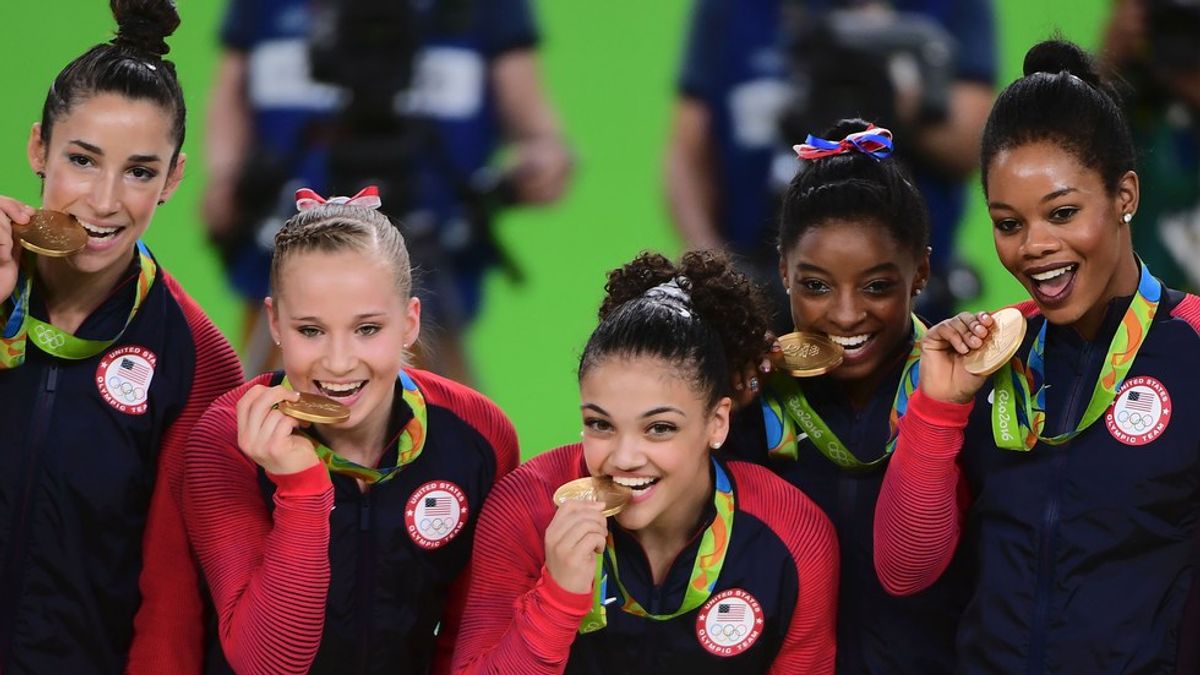 This week has been one of—if not the—most successful weeks in history for U.S. gymnasts. Simone Biles and Aly Raisman took gold and silver medals in the all-around competition, and the U.S.A. team won the gold for their outstanding performance in the team competition. At the team performance, after finding out about their amazing feat, they raised their hands in the air as they yelled their official team nickname—“We are the Final Five!”

The team named themselves the “Final Five” both as an honor to national team coordinator Martha Karolyi, who is retiring from her job, and the fact that they are the last team of five gymnasts at the olympics—the team that competes in the 2020 Tokyo olympics will only boast four gymnasts.

It has been evident over the years that the team size is shrinking. Back in 1996, when the U.S. clinched their first team gold medal, they had seven gymnasts, hence their famous nickname “The Magnificent Seven.” After that, the team size was reduced to six, until 2012 when the “Fierce Five” stepped up to the plate and clinched the second ever team gold medal. This has already caused disappointment for many fans, but this even further reduction of team size seems to be the absolute last straw, for many fans, coaches, and gymnasts (including me).

Last year, the International Gymnastics Federation (FIG) announced this change. Teams would be able to qualify up to six gymnasts to compete in the games, but only four gymnasts would be able to compete in the team final. FIG announced that they made this change in order to “make the qualification more fair”—in other words, they believe that the U.S.’s dominance in the sport is makes it harder for gymnasts from less qualified countries to qualify and obtain spots on the podium.

I find this change to be absolutely ridiculous. I am all for the competition being more fair, but I do not believe that reducing the team size will make it more fair.

For one, there are many gymnasts who are not strong on all events—Madison Kocian, for example, was picked for the olympic team solely for her extraordinary talent on the uneven bars, and in 2012, McKayla Maroney only competed on vault—she did not even attempt to qualify for any other events. Plus, not all gymnasts even compete on all events in the team finals, so reducing the number will not reduce the number of gymnasts who compete on each event in the team final, and will not make any difference in how the team scores turn out.

Reducing the size of the team will not make any difference in terms of individual and all-around medaling either. Again, not all gymnasts are strong on all events. Even Simone Biles, who is currently considered to be the best female gymnast in the history of the sport, is not as strong on the bars as Madison Kocian and Gabby Douglas, both who were picked over Simone to compete on bars in the individual event finals. Aly Raisman, who was picked for the second spot in the all-around competition, only qualified for one individual event final. So, even the U.S.’s best all-around gymnasts are not necessarily the strongest gymnast from the team on every event.

Speaking of which, reducing the team size will hurt gymnasts who tend to specialize on only one or two events. If they pick only four team members, it will simply be too risky to pick people for the team who only specialize on one event, such as McKayla Maroney. This is unfair to those specialists, for they work just as hard as all-around gymnasts and if they are truly the best on an event, they should be picked! There could be many reasons why someone tends to be better on one event, such as injuries or illnesses that make it hard to compete on another events (for example, in 2008, Chellsie Memmel injured her ankle and could only compete on bars at the olympic games), or body type, or because a gymnast simply is better at a particular event! If a gymnast is amazing at one event, they should have a shot at the olympics—gymnastics is a very hard sport, each of the individual events could be considered to be their own sport. Many swimmers are picked for the olympic team based on a particular stroke they specialize in, why can’t it be the same for gymnastics? Individual event specialists have been some of the most memorable athletes in the sport. What would the 2012 olympics have been without this face?

Finally, I just do not agree with the reasoning. When FIG says they want to give less dominant countries a chance to medal, they obviously have the U.S. and their strong team in mind. However, the U.S. has only won the team gold three times—not nearly as many times as Russia or Romania. I do not even understand why they reduced the team to five in the first place, for the U.S. did not win the team gold any of the years in between 1996 (the last year with seven gymnasts on a team) and 2012 (the first year with five gymnasts on a team). Romania won in 2000 and 2004, and China won in 2008. It was not even the same team winning all of those years. Who even cares how dominant certain countries are? There are certain countries who are more dominant than others at the sport in the olympics. If a country was winning the olympics every single year by a huge margin, I could understand doing something to make the competition more fair. But that obviously has not been the case, the U.S. has only won three times and this is the first year they have won by a large margin. I simply do not think that reducing one gymnast from the team size will make a difference in how fair the competition is.

It looks like this decision is set in stone, but I truly hope that FIG will reevaluate their decision after the 2020 olympics. Gymnastics already does not get nearly enough publicity and praise, considering how hard and beautiful a sport it is, except during the olympics. Every time they reduce the team size, they are reducing the chance of a gymnast to be able to compete, and reducing the number of athletes who will influence this amazing sport. As Aly Raisman says:

So true, though. Oh well, it looks like all we can do is hope for change. In the meantime, let’s enjoy the olympics as they are, and pray that this will not be a long-term decision.