Why Aren't You Present?

"Realize the power of art that does not hang on the walls of galleries." Abramović 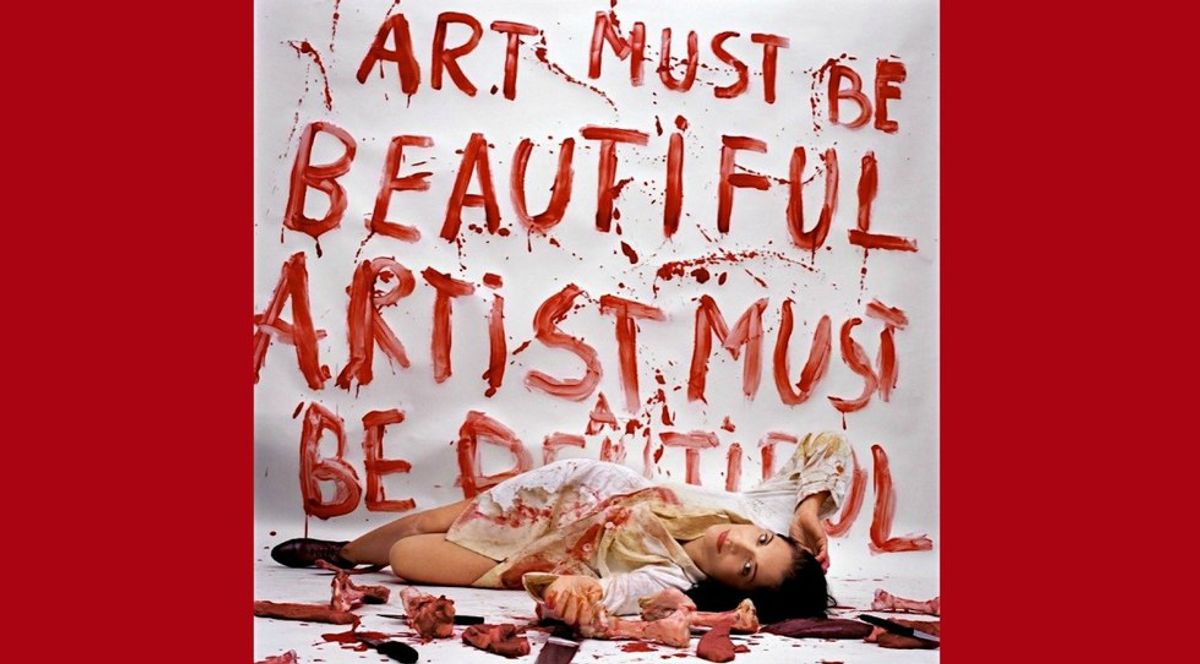 In a world where media consumption is easily accessible and the art world can be navigated at your fingertips, not just in a gallery, how can artists capture our attention? Paintings can become mass produced prints and you can explore sculptures in 360 view finders online. An art medium that has maintained its one-of-a-kind in person novelty is the performance art piece. Filming the performance cannot do it justice, photographing it lends no hand, the only way to experience it is to be present.

“We always project into the future or reflect in the past but we are so little in the present.” – Marina Abramović

Watch a clip of Abramović's The Artist is Present.

But what’s the point of being a performance artist? Why should we engage with performance art if we can sit at home and keep up with the newest art and trends on Tumblr? What makes it worth it?

“The most revolutionary ideas are not sellable, but only mind-changing.” – Marina Abramović

Performance art has been on the rise since the early twentieth-century, sparked by movements such as Futurism and Dada. Performance gave artists the opportunity to forge an experience for the audience that left them convinced rather than working their words into a material form in hopes of persuasion. Artists embraced the mediums propensity toward more radical subject matter including political dissent and feminism as early as the 1960s.

“The aim of art is to represent not the outward appearance of things, but their inward significance.” – Aristotle.

Performance art has shown more than any other medium that, “Good art is not what it looks like, but what it does to us.” – Roy Adzak

Here are a few examples of powerful performance art that made us feel something.

After smearing her nude body in paint, Schneeman then pulled text inscribed paper from her vagina and read it aloud to the audience. The text was likely her response to a male critic’s critique of her work. Talk about baring it all and leaving the audience with more than a few questions.

Burden addresses humanity’s call to morality when he stood against a wall whilst his best friend shot him .22 rifle in his arm.

Actresses painted in blue served as Klein’s paintbrushes for his live audience painting. Klein’s work was inspired by the atomic explosions of Hiroshima and Nagasaki years prior.

Beuys lived in a gallery for three days with a wild coyote and each day the Wall Street Journal was dropped off for the coyote to use the bathroom on.

An eight-foot piece of rope bound these two artists together for a year and although they were always in the same space, they didn’t touch the whole time they were bound.

Kotak built a birthing area at an art gallery where she had a live water birth overseen by a doula.

For 28 days Jenkins pushed wool up her vagina and pulled it out as she knit during the day.

Antoni coated her hair in black hair dye, using the soaked mass to paint live on the floor.

Hatoum walked barefoot through the city for an hour while her Doc Martin boots tied to her ankles trailed behind her.

For 736 hours Abramović sat on display at MOMA, silently for 8 hours a day. Abramović broke down boundaries between life and art. “Communication starts when words are not present at all. I think we put so much emphasis on language; actually silence is so much more important.”

Nicole Marie Nigro
Individual Creator
7974
c1.staticflickr.com
Where to start...... Let me start with the cliche that life throws us curveballs and what we do with it is what counts.