6 Things I Learned From Attending The 2017 Inauguration
Odyssey

6 Things I Learned From Attending The 2017 Inauguration

A unique ending to an already-unique election cycle. 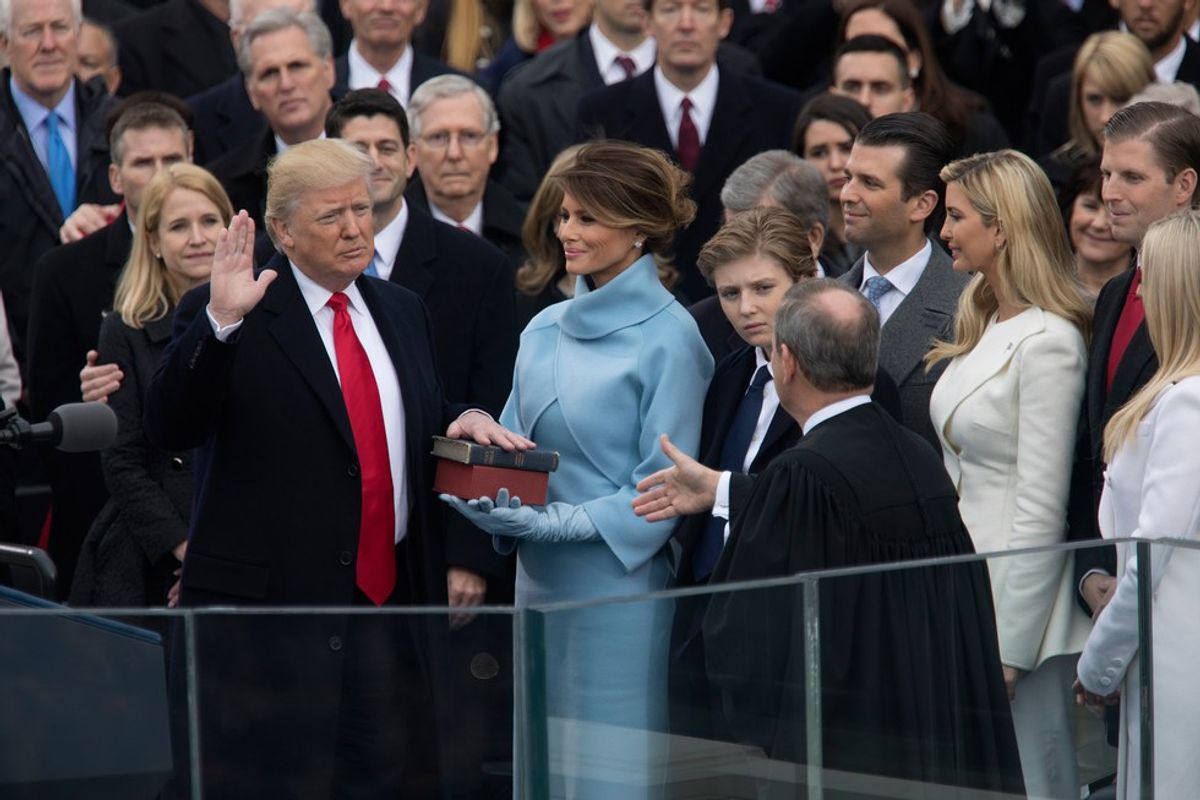 I remember where I was the day it happened. I was at my dad's house leaning against a counter, waiting for him to get ready upstairs so that we could go on a walk. I remember the sound my phone made when I received a CNN "breaking news" notification. In bold lettering, it declared that billionaire businessman Donald Trump was entering the race for the Republican nomination for president.

I simply nodded and put my phone away. It had felt like everyone was jumping into the race to be the next GOP nominee... so his announcement didn't seem special. Besides, he had been threatening for years to run for president. There was no way he could go against the likes of Republican heavyweights like Jeb Bush and Marco Rubio.

I had no idea that just a year and a half later, I would be standing in front of the U.S. Capitol on a chilly, rainy January morning, watching him be sworn in as the 45th president of the United States.

Getting the chance to attend a presidential inauguration was an opportunity that I will be eternally grateful for. Regardless of the party affiliation of the incoming president, watching the peaceful transfer of power is an iconic symbol of American democracy.

While there, I learned a few things about the inauguration, the people in attendance, and what it was like to witness such a historic event:

The crowd around me may have been just as interesting as the inauguration itself. While protestors were mainly confined to being outside the event, Trump supporters and a sea of "Make America Great Again" hats and flags with Trump's face on them surrounded me. They all came from diverse backgrounds. Some were law students, some retired, some farmers, accountants, minor politicians and truck drivers. Some were from the northeast, some from the heartland, some from the south, and some from the southwest. All of them united in their hope and optimism for the next four years.

One man standing next to me was an out of work factory employee. When the plant he was employed with in Ohio closed, he left with little hope. When Trump called for restoring jobs to America and its shuttered factories, the man screamed out in joy. Genuine hope seemed to be on his face.

The spirit of discourse and anger was a particularly surprising aspect of the event. People shouted, booed, and chanted during moments where Democrats were welcomed. Hillary Clinton, Trump's former opponent, and House Minority Leader, Nancy Pelosi, turned the crowd particularly angry. When Senate Minority Leader Chuck Schumer spoke at the podium, I was unable to hear most of his speech due to the intense shouts of disapproval about the president-elect's name. Considering that he was speaking about American unity during the Civil War and how it is relevant today after such a divisive campaign, the frequent interruptions seemed inappropriate.

I'm not going to lie, seeing three former U.S. presidents was pretty awesome. Watching frail, 92-year-old Jimmy Carter come out through the red tunnel with a broad smile on his face made me smile. He was followed by Bill Clinton and George W. Bush. Standing before these men who have shaped history for most of the later years of the 20th century was truly an amazing experience.

4. About the awe of hearing the oath:

Hearing the oath of office was truly amazing. It felt very surreal, like time had slowed down. The sounds of the crowd died down as Trump repeated the oath from Chief Justice John Roberts. Trump's distinct voice echoing across the National Mall from the loudspeakers. I'll always remember that moment, standing there and reflecting on all the past inaugurations and all the previous great presidents who have repeated those very same words.

5. About the fear for some, but complacency of others:

Upon leaving the area after the inauguration was over, I was able to see the crowds of protestors who arrived. They came from a wide variety of causes. Some had "Black Lives Matter" signs, some were from immigration groups, and many were there early for the Women's March the following day. Many held signs saying "Not my President," and signs describing how they were afraid of what was to come. They were scared of being deported, being scrutinized, or no longer being treated with respect. They were unsure of what awaited for them in Trump's America.

Others however, no longer felt afraid.

"I can finally tell people I voted for Trump," an old woman happily declared as she and her friends departed the inauguration festivities.

"You no longer have to be afraid of that," a man shouted back.

At that point I realized that while some groups in America may be scared of what is to come, what kind of persecution they may face, there are others who were already scared of persecution who can now come out of the shadows. Trump referred to these people on the campaign trail as "the silent majority," a term coined by President Richard Nixon to describe voters afraid to express who they really will vote for. Some political pundits laughed it off. Both men wound up winning elections so perhaps the two presidents were on to something.

Walking through the crowded streets of Washington D.C. after the ceremony, I reflected on how proud I was to be an American. While I really couldn't say with certainty what the new president will do over the next four years, I did feel somewhat optimistic. It felt empowering to witness a presidential inauguration with all its history and precedents rooted in democracy and patriotism.

I looked up at the sound of an aircraft and watched as Executive One, the name for the military helicopter carrying the outgoing president and family, fly overhead. I waved goodbye as it flew past, carrying the man who had been president since I was 12 years old. Many people in the crowd shouted, "good riddance," and cheered. It was a unique ending to an already-unique inauguration and election cycle.

Attending a presidential inauguration is something that I will never forget and is an experience that I would definitely recommend to any and every American.