What It's Like To Be A New Yorker Living in Florida

What It's Like To Be A New Yorker Living in Florida

Almost everybody is nice and it's always hot. 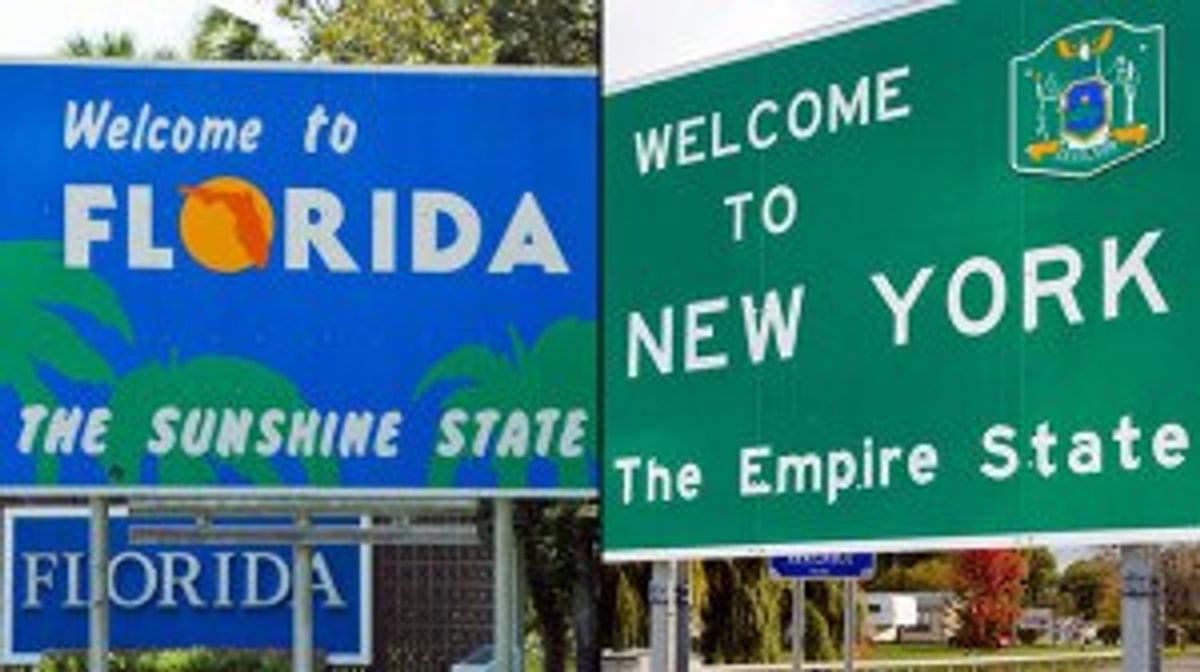 Ever since leaving New York to go to college in Florida, I have dealt with many circumstances that have made me realize how differently I was raised compared to the people around me. Here are a couple reasons why:

1) Almost everybody is nice.

There have been many times while walking down the street or shopping for groceries where people just say "hi" to me. I'll pass a stranger and they'll say, “Hi! How’s it going?” Being caught off guard and not accustomed to the random kindliness, I’ll just idly stare back at them without saying a word. ‘Why is that stranger talking to me?’ I think to myself. Everyone in New York are so invested in their own lives, it’s a slim chance someone will stop you to see how you’re doing. Thank you kind, Floridian stranger for saying hello, but most likely I'll stare at you without saying hi back, because why do you care?

2) Everyone walks so freakin’ slow.

PLEASE WALK FASTER. Don’t you have somewhere to be? New York is so fast paced, it’s important to get to where you’re going promptly. I don’t have time to lollygag and stare at the palm trees, it’s too hot out for that. Please, somebody get me to some A/C.

3) It’s inevitable that you’re going to freeze to death when you go back up north.

“It’s 50 degrees out, why are you wearing a parka?” UM, I’m wearing this because most of my time is spent in 80-degree weather and my blood has thinned out. You have thick skin and you are used to this weather, fellow New Yorker. I, on the other hand, am not. This transition is temperature shock... please cut me some slack.

When my school friends go somewhere without me, I'll always say “TFTI," which means, “thanks for the invite.” By now they are used to it, but when I say it to people I don’t know, they stare at me like I have two heads. Also, the act of getting drunk and high is apparently called “getting cross-faded” in Florida. To me, it’s always been “getting twisted,” which again, causes the two heads staring.

5) Every city in Florida is so. spread. out.

How do I drive an hour and I’m still in the same city?! New York City is so condensed, you can get anywhere pretty quickly by just walking. Need to get to Panera? You have to get in your car and drive if you’re in Florida. NYC? No problem, there’s probably five down the next block.

I’m at the beach, sipping on a pinã colada. Normal, right? But did I mention it’s December 10th? WHAT?! How is it the holiday season? Where’s the snow? I just can’t seem to get into the holiday spirit when it feels like summer and the houses around where I live don’t really have any lights up. Maybe if someone dumps fake snow on me while blowing cold A/C in my face it might work, but the chances of that happening are slim.

7) When you tell people you’re from New York, they automatically assume you’re either from New York City or Long Island.

“Where in New York are you from?”

HAVE YOU SEEN THE STATE OF NEW YORK ON A MAP? IT’S BIG. BUFFALO IS UPSTATE. SYRACUSE IS UPSTATE. I am an hour north of the city; that is not upstate. That’s like asking a Floridian if they’re from Orlando or Miami. Those are the only two places you know, so they have to be from one of them, right? WRONG.

What accent? You mean like from Brooklyn or The Bronx? Sorry, I don’t have one, I’m not from a place that has a distinguishable accent. Didn’t mean to disappoint.

Moving to a place that has pretty different social norms and lifestyles than you can be difficult, but it always works itself out. Florida is definitely different from New York, but the experience has definitely been worthwhile, and I love the fact that I live in both states and personally live the two different ways of life.