What Happened to Maylin?
Odyssey

What Happened to Maylin?

How Missing White Girl Syndrome is thriving in today's society 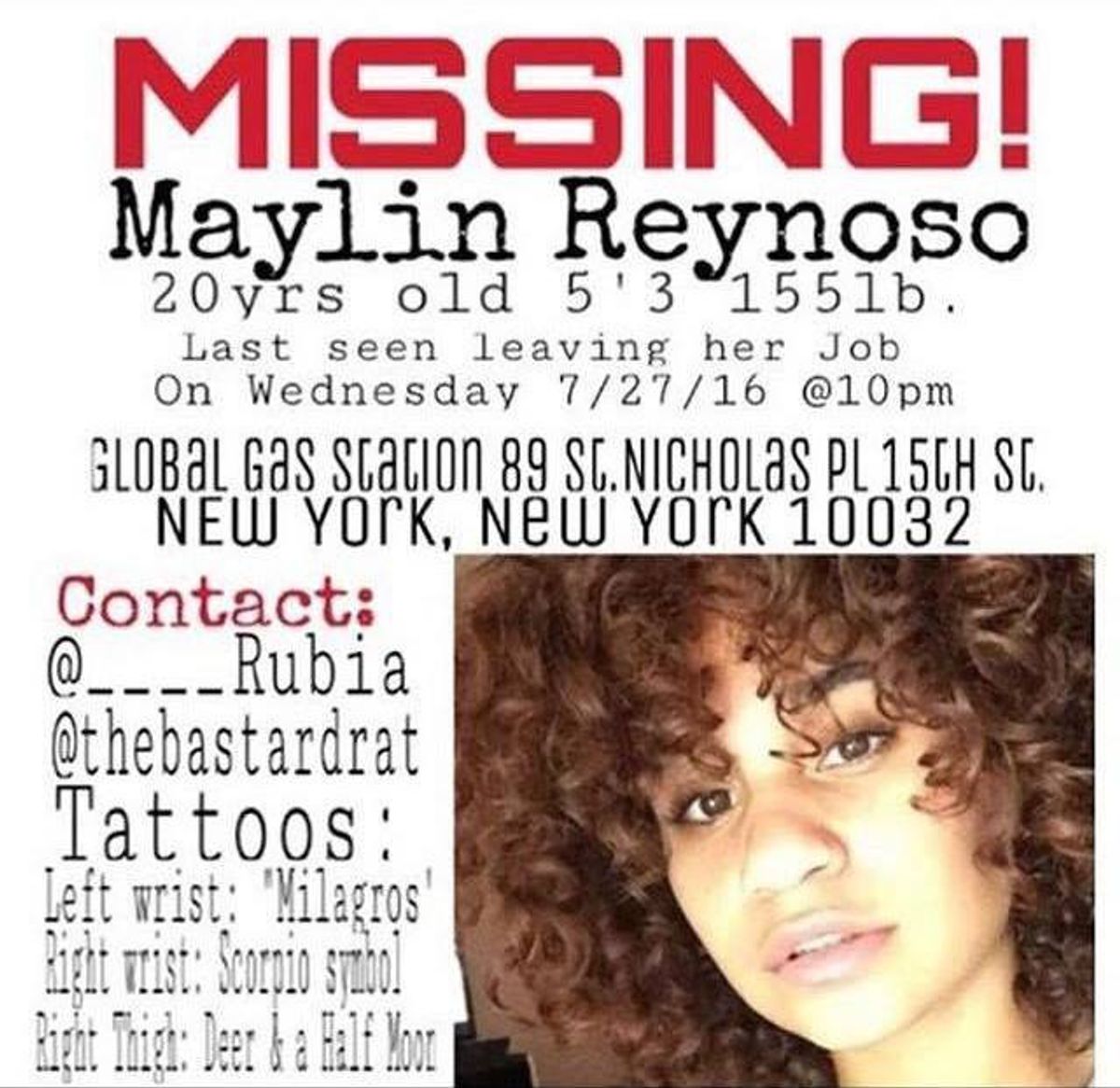 Two women in New York City were murdered in the same week, one was going for a jog in her neighborhood of Queens, and the other was leaving her job in the Bronx. The way the media covered the stories of these two women perpetuates the racial bias present in the media and the idea of the Missing White Girl Syndrome -- more media coverage if the victim is attractive, young and white.

On Tuesday, August 2nd, Karina Vetrano was jogging in her neighborhood in Queens and was brutally raped and murdered, her body dumped in a park and later found by her father. I went to work on August 3rd and her story was on the front page of the news, and I was heartbroken to read of such brutality and disregard for human life. Following her death, the news was in a frenzy, with quotes from her father and stories about her life and inspirational excerpts from her instagram and fitness blog. She was beautiful and successful with a vibrant personality that made people love her. Rightfully so, people were grief-stricken and terrified by her story and her father swore revenge on her killer. The police department offered $20K for information on her killer and the FDNY recently added $5K, urging people to come forward with any information.

This is juxtaposed with the disappearance and death of Maylin Reynoso, a 20 year old Dominican girl from the Bronx who was last seen leaving her job on July 27th. She was missing for a week before her body was found and there was no media coverage of her disappearance, only homemade posters on the subway that most people just walk by without bothering to look at. A quick google search of her name will get you nowhere, just a couple links to her social media pages. Even now, weeks after each murder, if you google both names you will see the shocking difference between the media coverage of Karina’s death vs. Maylin’s. I wouldn’t even know about Maylin’s disappearance if it weren’t for instagram, we have many mutual followers and her friends were posting pictures begging for her safe return. I also learned from Instagram when she died, as her friends posted pictures of her with captions of RIP, but no other information of her passing.

The silence surrounding her disappearance and death troubled me, and I found myself googling her name repeatedly to find updates on her situation. Yet nothing came. One Spanish news network reported her story. ONE news outlet cared enough to get her story out there. For Maylin there was no amber alert, no outcry for her search and rescue and she was missing a week. Anything could have happened within that time. Instead they found her body floating in the Harlem river and there’s no information on how she got there.

The media bombarded us with heartwarming stories of Karina’s life to elicit sympathy and sell more stories. Her story received more media coverage because the victim was attractive, young and white.Her death is neither less nor more valid than Maylin’s passing, both are infuriating and petrifying, yet I am outraged at the way the media handled each story.

The racial biases in journalism need to be addressed and challenged, and I demand to know what is happening to the women of NYC, regardless of race or class or age or ANYTHING.

Let’s challenge the racial bias of victimhood; film, television and print media paints white women as the "innocent, worthy and legitimate victims” while women of color are called runaways and their disappearances are dismissed. The general public should have access to information about missing people and their stories should be widely circulated so we can help bring them home safely. The media’s discrimination of missing WOC is despicable and needs to be acknowledged.

Where is the reward for information about Maylin's death? Where is the public outcry of rage and sympathy? We cannot let the stories of WOC disappear into the void of silence and apathy. We need to protect women and we need to question the racist system controllers and demand a change.

Emmaline B
The Narrative
92391
https://unsplash.com/photos/O0T1SIgHAfM