What A Guy's Hairstyle Says About Him

What A Guy's Hairstyle Says About Him

From the man-bun to the mohawk: guys' hairstyles decoded. 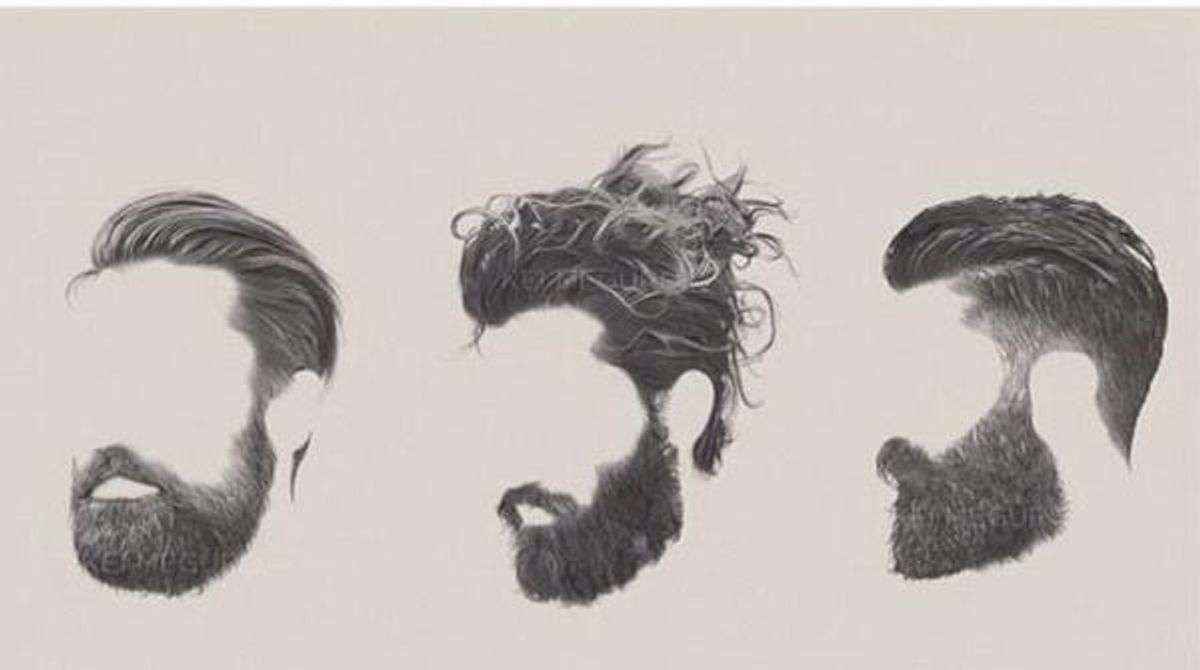 Sometimes it feels like boys are from another planet entirely. Their texts don't make sense, their actions are a mystery and they say one thing and mean another thing entirely. In a world where 50 percent of the population is a mystery, there is one secret to understanding a boy a little better: his hair. Man buns, faux hawks, buzz cuts: each of these hairstyles gives us a little inside peek into what could possibly be going on in a guy's mind. Every hair style has it's pros and cons, it's up to you to decide which 'do is right for you. Here's what a guy's hairstyle says about him:

This new hair trend is sweeping the nation. It's most notable among 20-somethings who frequent breweries and hole-in-the-wall coffee shops. These guys are trendy, can probably introduce you to new music by bands you "probably haven't heard of" yet, and will definitely have an endless supply of hip sweaters and cardigans you can borrow.

Slightly grown out and unruly, this haircut is usually paired with a pair of Chubbies shorts and an American flag tank. The guy rocking this haircut is many things, but above all, he's fun. He's probably ace at beer pong and knows all the words to "Wagon Wheel." Dating isn't really his "scene," but if you choose to get involved with this guy, you're in for a good time. Just keep in mind that no matter what he says after a couple of shots, he will never love you half as much as he loves America and Natty Lights.

This buzz-cut hairstyle highlights a boy's best assets ... his cheekbones, obviously. Pair this with some well-groomed facial hair and strong eyebrows, and you've got one devilishly handsome man. This boy may not be the kind to wife you up and come home with you for the holidays, but he's definitely the go-to guy for those days you feel like going to the dark side. He'll probably take you to seedy bars and give you a ride home on the back of his motorcycle ... and you'll love every second of it. He may lack luxurious locks to run your fingers through, but his "devil may care" attitude will be all you need to be putty in his hands.

Long and flowing, this dude's hair will make any girl jealous. You aren't sure if it's him you're attracted to, or the beautiful long locks that remind you of the dirty romance novels you sometimes read on the down low. This dude obviously puts stock into his appearance, which is important, but make sure that's not all he cares about. It's no fun being the less pretty one in a relationship.

A popular hairstyle for boys still going through puberty, this skater boy hasn't quite come to terms with that fact that 2010 has come and gone. The boy who dons this look's main form of transportation is a skateboard of some sort, and he's often seen rocking a pair of skinny jeans and Etnies shoes. If you're a Sk8er girl looking for your Sk8er boy, this boy is the one for you. And hey, you can probably share jeans, which is always a plus.

Don't be fooled by this slicked-back look, often found on athletes or boys who wish they were one. This look seems easy and effortless, but this kind of messy almost-faux-hawk perfection actually results from tons of preparation and hair gel. This dude, like his haircut, is not all that he seems. Be prepared for 2 a.m. "U up?" texts, that is, if he ever gets around to texting you back at all. Emotional roller-coaster rides are a given with this haircut, so if you do decide to go for a ride, buckle your seat belt and be prepared to be left feeling dizzy.

This boy is the exact opposite of "The Ronaldo." Emotionally sensitive and sweet, this boy is the perfect date for those times you feel like cuddling on a couch and watching "The Notebook." He may not be full of surprises or keep you on your toes, but he's reliable and loyal, and will treat you like a princess. Some people say Jon Snow knows nothing, but I think we can all agree that he knows hair.

Everything seems all fun and games at first. You hang out often, and it's like you can't feel your face when you're with him, but don't let yourself be fooled: he's not the type you can take home to mom, and the only time you'll ever hear from him is when he calls you at half past five.

Madison Franz
The Narrative
1116528
Photo by Brooke Cagle on Unsplash

Madison Franz
The Narrative
653867
Photo by Manny Moreno on Unsplash