Weirded Out By Pride? Get Over Yourself
Odyssey
CurrentlySwoonLifestyleHealth & WellnessStudent LifeContent InspirationEntertainmentPolitics and ActivismSportsAdulting
About usAdvertiseTermsPrivacyDMCAContact us
® 2023 ODYSSEY
Welcome back
Sign in to comment to your favorite stories, participate in your community and interact with your friends
or
LOG IN WITH FACEBOOK
No account? Create one
Start writing a post
Politics and Activism

Weirded Out By Pride? Get Over Yourself

How Evangelicals still get LGBTQIA+ rights wrong, and why it still matters. 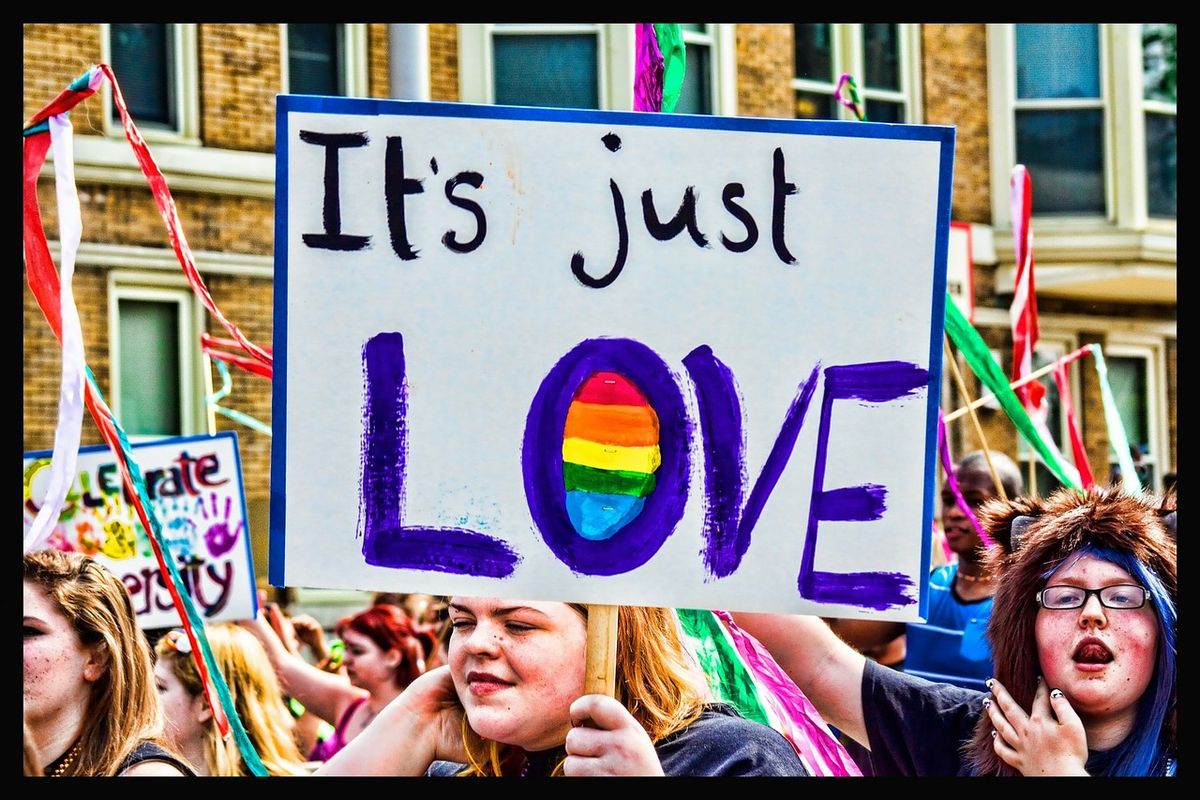 As a male, fitting in means machismo — dolls are bad, GI Joe action figurines are good and if you cried, you deserved to be outcasted for all eternity. Basically, an endless game of comparing each other’s metaphorical schlongs.

Yet, grade school me was the complete opposite. While other boys yapped away about their new Pokemon cards, I’d sit in the corner and read my favorite map book. When boys entered shoving matches over whose seat was whose, I’d cry whenever someone would use my eraser without my permission (Which leads me to an aside — I was such a crybaby. I cried over everything).

The thing is, when you’re forced to fit a mold that you can’t naturally fit in, no matter how hard you try, you start feeling guilty and internalizing that guilt. You wish someone would just tell you that you were OK and it was OK being who you were. Because when that person does hear those words, that person is totally transformed into the best person they can be. And the world is a little better because of it.

All this month, a group of people have been celebrating who they are — who they truly are as human beings. That celebration culminated in Pride, a weekend where LGBTQIA+ individuals finally had enough and said, no, we’re not going to bottle up who we are anymore. Not for you, not for our bosses, and sure as hell not for their parents.

And the world is a little better because of it. Well, most of it anyway.

You see, as a straight, cisgender male, growing up with a certain worldview on LGBTQIA+ individuals really does have an affect on you. When you’re told that individuals who love a certain way are wrong, that changes how you see them. I was raised that way. I’m fortunate to say that isn’t the way I think anymore.

So let’s stop burying the lede here: Evangelicals, please get over your obsession with hating LGBTQIA+ people.

“But I don’t hate them,” you say. “I love people, I just can’t agree with their lifestyle.” And I get that. I really do. Or at least I really did. Let’s do some word association, shall we?

“I don’t hate Asians, I just can’t agree with their lifestyle.”

“I don’t hate Muslims, I just can’t agree with their lifestyle.”

“I don’t hate the Dodgers, I just can’t agree with their lifestyle (I’ll let this one pass. Everyone here hates the Dodgers.).”

The point here is that none of these individuals chose who they were. They didn’t wake up one day and said, “You know what, I’ll be Asian today.” The same goes for LGBTQIA+ people. Realize that you valuing their worth yet devaluing their “lifestyle” (which is a terrible term to use with LGBT people by the way; read up) is inherently devaluing them. Realize that for every ex-gay individual who claims to be rid of the disease known as Being a Decent Human Being and Loving Who They Love, there are thousands more people hoping, wishing, praying to be accepted for who they are. And then coming to the realization that hey, this is who I am. It doesn’t matter what other people think. I’m not going to fight it.

So Evangelicals, please don’t fight them either. Realize that taking any stand against LGBTQIA+ rights — voting against LGBT legislation, donating to a church that does not allow gay marriage, protesting for “traditional” marriage (See? I can use quotes too), regardless how how couched in love you believe it to be — is inherently discriminatory, hateful, wrong and only detracts from your message of love and compassion. Realize that your worldview only divides people further and denies them the basic rights your God (not to mention our tax laws) affords all other citizens.

And most of all, realize that these individuals don’t care at all what you have to say about how they live and who they love. If you’re that affected by what another person is doing, perhaps the problem lies within yourself.