What other team can win the title in 4.7 seconds? Let me know. 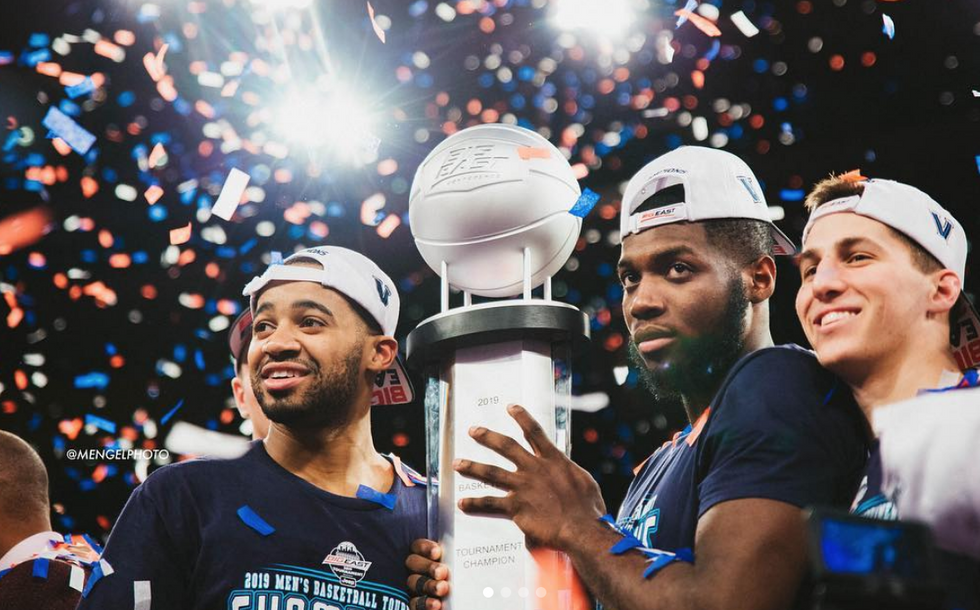 ESPN brackets were released Sunday evening, after Selection Sunday. I must admit, though I know we did not have the outstanding season we had last season, seeing the Villanova Wildcats seeded at number 6 broke my heart a little. What broke my heart, even more, was selecting a different team to tear down the net in Minneapolis. But, after 3 years of basketball excellence under Big East Coach of the Year Jay Wright, the Wildcats are not looking like the favored champions this tournament season.

I'm as big of a basketball fan as anyone else at this University: we live and breathe basketball, anxiously waiting on the edge of our seats for the student ticket lottery to open in November and cheering on the Cats from October through April. The campus comes alive and even students watching the game from their dorm room are dressed in blue and white. When the Villanova Wildcats played in the National Championship Game last year, students and alumni watched from all over the country, from the University's official game watch in the Connelly Center to private homes across the country of long-time friends to the nosebleed seats of the Alamodome in San Antonio.

When the buzzer sounded and Villanova's 79 ­– 62 victory over the University of Michigan was finalized, campus erupted. Tears were shed, strangers were hugged, and Villanova University was once again the NCAA National Champions for the second time in three years. Following the victory, four of the starting players were drafted into the NBA. This season, while the team has still performed well, it does seem as though another national championship is not in the stars for us.

Returning to the tournament we dominated last year as the sixth seed with our victory against 11-seed Saint Mary's College up in the air is not a fun feeling. Coupled with the fact that everyone and their mom LOVES to remind us of our improbable loss to Michigan in the Championship rematch, it's hard to fill out the NCAA bracket and put Villanova past the Round of 32 (there, I said it, so you don't have to). My friends and I feel the need to follow up our projected winners with "but Villanova will be back next year to dominate, this is an offseason, we lost four guys to the NBA, we were never going to do as well as last year," in order to justify why we haven't selected our National Champions to win.

Despite knowing that it will feel like my heart has caved in when we inevitably lose to a team whose mascot is far inferior to our own Will D. Cat, I believe that this is what we say it is: a year to rebuild and restructure. Banking on seniors Phil Booth and Eric Paschall to play almost all forty minutes in every game is impractical, and those losses should come as no shock to any Villanova fan (and if it does, why don't you spring up and down the basketball court for close to two hours and let me know how well you play). Even with the unprecedented number of losses to even more surprising teams, the Villanova Wildcats emerged as the Big East tournament AND Conference Champions for the 2018-2019, Head Coach Jay Wright received the Big East Coach of the Year award and we were still seeded above the midpoint in the Southern conference in the NCAA 2019 Tournament.

So, let the haters hate. Yeah, we had an off-season. But we can't be expected to win the championship every year — that's just unfair to the other teams! And, in my own humble, unbiased opinion, this off-season wasn't that bad! We still won the Big East tournament — for the third year in a row, which is the first time that has happened in the tournament's history and are building up a strong base for the future of Villanova basketball. And, in case anyone needed a reminder: we still won two national championships in the past three years, and we did one in 4.7 seconds.