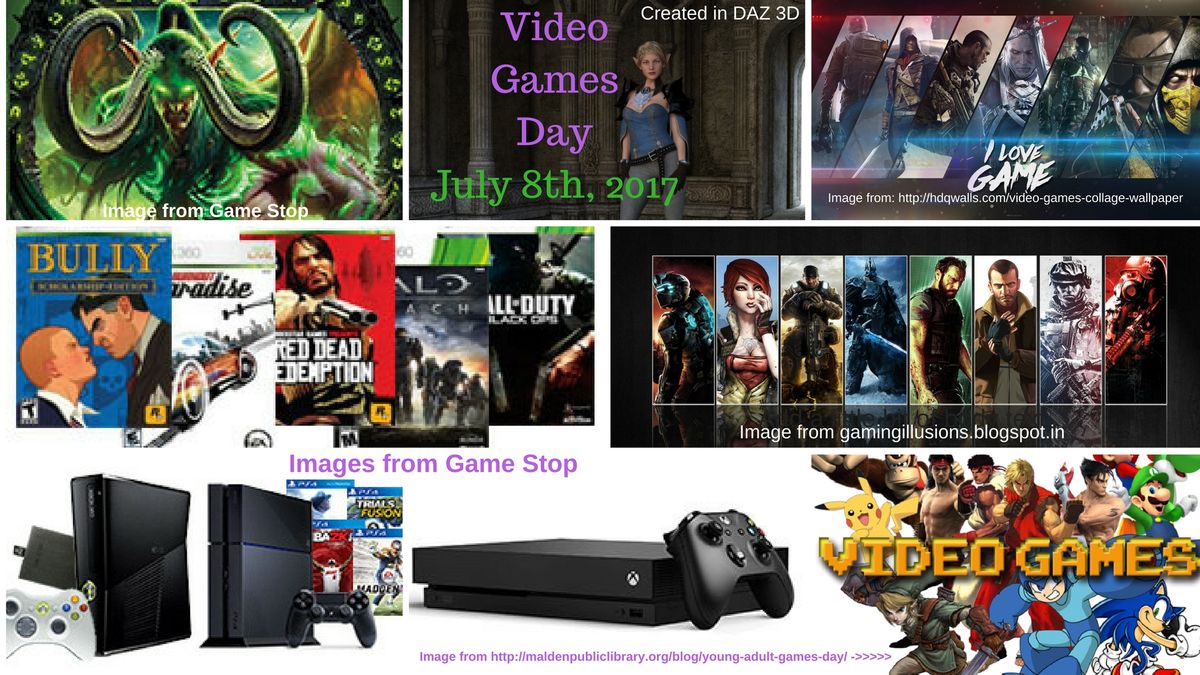 What do I know about gaming? I do not know much about gaming, even though I did work at EB Games/Game Stop at one time in my life. Now, I am not going to list every single game, just going to give you the original title only on the games I have played (what I remembered) or would not mind playing. My gaming life started with and played on:

My favorite games were “Donkey Kong,” “Space Invaders,” “Missile Command,” “Pac-Man,” “Pong,” “Asteroids,” and “Pitfall.” Per Atari, the corporation prides itself on being the “original innovator of video gaming.” The Atari Corporation was founded in 1972 by Nolan Bushnell, AKA “father of the video game industry” and Ted Dabney. Nolan was inspired by the amusement park arcades and the company Magnavox. The Atari console was not the first, Nolan released a console called “Pong,” I am talking about the home version that was released in 1975, not the arcade version that was released in 1972.

I played “Airwolf,” “Castlevania,” “Duck Hunt,” “Friday the 13th,” “Metroid,” “Millipede,” “A Nightmare on Elm Street,” “Pac-Man,” “Spy vs. Spy,” “Super Pitfall,” “Tetris,” and “Super Mario Brothers.” My father was hooked on “Zelda.” Per Nintendo, the Nintendo Entertainment System, AKA "NES," was introduced to us by Japan in 1985 and sold over 60 million units. Super Nintendo, Let’s see, I played “Super Mario” games, “Zelda” games, “Donkey Kong” games, “Castlevania” games, “Mortal Kombat,” “Kirby,” and many others. Super Nintendo Entertainment System, AKA “SNES,” came out in 1991. Per Nintendo, they sold over 49 million consoles all over the world.

When it game to the PlayStation consoles, I remember being at a friend’s house and playing on his system. I don’t remember the games that I played, though. When I met my second husband he had a PlayStation 2. He introduced to the world of massively multiplayer online role-playing games (MMORPG) in the form of “EverQuest.” Per PlayStation, the first launch of the console was in Japan in 1994. Per CNBC, In January of 2017, PlayStation has sold 53.4 million units of the PS4’s. I have played some games on the PS3 when I was working at Game Stop (EB Games). I would like to play “God of War” and “Heavenly Sword.”

The Xbox, child of Bill Gates, I am more familiar with. I have played on the original Xbox and the Xbox 360. I have played many games on these consoles. My favorites are “The Elder Scrolls,” “Halo,” “Mass Effect,” “Assassin’s Creed,” and “Gears of War.” Per CNBC, the current model called Xbox One is estimated to have sold 33 million units.

Wait, I am not done. Remember back in the PlayStations that I was introduced to the world of MMORPG? One of my husband’s co-workers came over to the house. He introduced me to the world of computer gaming in the form of “World of Warcraft.” Now, this was only the free version. During the Christmas sale at my work, I could get a combo pack of the original “World of Warcraft” and the expansion called “The Burning Crusade” cheap. To this day, I still play “World of Warcraft.” I play between Horde and Alliance. My Horde is on the realm of Nesingwary and my Alliance is on the realm of Alleria. I am not a skillful player, I usually just do the quests. My main goal is to collect all the pets and mounts.

I am currently play Pokémon Go. I am using my tablet and wi-fi hotspots to play. I just started playing this game. I am playing this game to get me out of the apartment. The walking will do me good in the exercise department. Plus, I get to spin time with my husband and we get to talk. Normally he is on his computer playing his video game and I am on my computer either doing school work, writing or playing a video game.

You remember when I mentioned how Nolan Bushnell is considered the “father of the video game industry?” Per, Smithsonian, Ralph Baer is “the father of the video game.” Scratching your head? Wondering who the heck Ralph Baer is? Well, Ralph Baer and his crew at Sanders Associates, Inc developed the prototype of the video gaming system back in 1967. The gaming console is called “The Pump Unit.” Games included chasing and target shooting. Next, Ralph Baer created the “Brown Box.” Games included ping-pong, checkers, sports, and target-shooting. The Sanders Associates licensed it to Magnavox. Magnavox released it under the name “Magnavox Odyssey.” The gaming console sold many units. The gaming console is also known for being the one to start the video game console industry. Do you agree? On my internet search, I found there were other gaming consoles that came out, in the United States, in the 70s. Such as, “PC-50X Family” by General Instrument and “Coleco Telstar Arcade” by Coleco, along with others. Time Magazine has a splendid video article of “The History of Video Game Consoles,” by Doug Aamoth and Corey Protin. You should check it out sometime.

What is your favorite console and games?