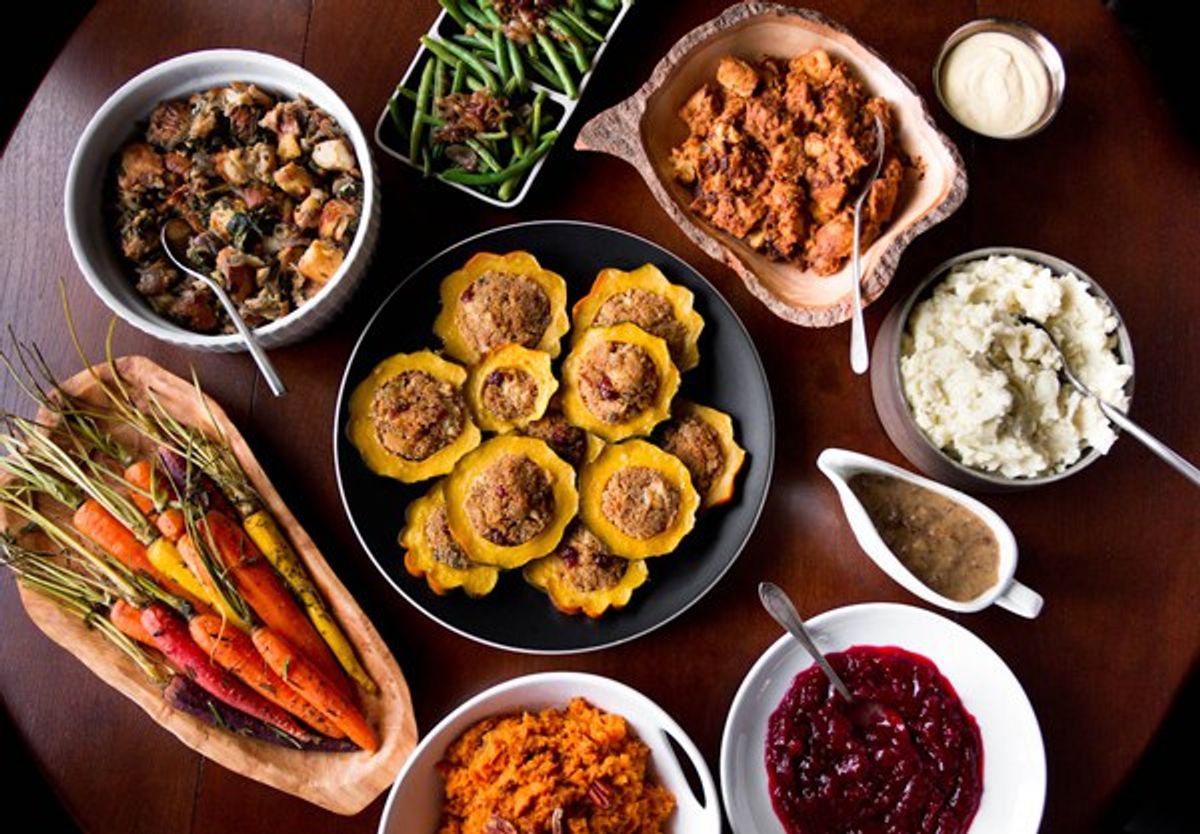 Thanksgiving, the time when people are encouraged to appreciate all of the wonderful things in life they are thankful for. However, I think most people are thankful for a day when it is completely acceptable to stuff your face with delicious food until you are incapable of moving. For some reason, American holidays seem to revolve around food, so if someone cannot partake in the Thanksgiving dinner, one might feel left out.

As a vegan, or for any aspiring vegans, Thanksgiving may seem daunting. Many imagine plates filled with flavorless tofu, green beans, and unbuttered rolls. This image couldn’t be more inaccurate, and because veganism is becoming much more popular, we have endless options. There are countless vegan alternatives, and many (if not all) traditional Thanksgiving dishes can be easily “veganized,” while many others are already “accidentally vegan.” So don’t worry aspiring vegans or vegetarians, you can join your relatives in blissful post-meal lethargy.

Just so we’re on the same page, a vegan is someone who eats absolutely no animal products: this includes all meats, fish, eggs, dairy, and usually honey. Most vegans also avoid materials made from animal skins such as leather and fur.

Thanksgiving revolves around the turkey; people eat when the turkey is done. On Thanksgiving alone, around 46 million turkeys are consumed. I won’t go into the treatment of poultry (although it is not very kind), but turkeys are cute; they love music and hugs, and they were almost our national bird. Personally, I would rather paint a turkey with my hand than eat one, but to each their own. Lucky for people like me, there are multiple vegan roasts on the market to satisfy our need for a Thanksgiving turkey. Every year, my family buys the Tofurky roast, which includes a stuffed vegan roast, gravy, a “jerky” wish bone, and an absolutely delectable brownie cake. I admit, the head of the table does not ritualistically carve the tofurky in our house, but I suppose it could be done on a much smaller scale. Also, the brownie cake is without a doubt the best store bought cake I have ever tasted, vegan or not. It is moist, rich, and extremely chocolatey. The serving size says six, but it’s Thanksgiving.

Vegan appetizers and sides are also unbelievably easy to make, it just takes a little more research. For an appetizer, serve stuffed mushrooms, hummus and vegetables, or even try to make your own “cheesy” dip. If you’re feeling classy, there is an array of vegan cheeses for cheese and crackers. Concerning side dishes, vegans can still eat garlic mashed potatoes, stuffing, and cranberry sauce. One year, my sister even “veganized” sweet potatoes and marshmellows. Many brands of biscuits and croissants are also "accidentally" vegan, so try to make that beautiful cornucopia for your centerpiece!

Generally, vegan food is healthier as well; you don't have to feel as bad stuffing your face when everything isn't smothered in butter.

However, that does not mean vegans never indulge themselves. On the contrary, the internet is filled with a plethora of vegan dessert recipes. Any dessert can be made vegan: cookies, cakes, pies, pudding, brownies, cheesecake, and anything else you can possibly think of. Non-vegan recipes can be easily tweaked, using almond milk and an egg replacer. Plus, you can eat as much batter as you desire, completely risk free.

Now I pose a challenge: try to have a vegan Thanksgiving. It may seem difficult at first, but with a short Google search, you won't know which recipes to make. Give your visitors something to remember while still keeping the Thanksgiving spirit. Or even better, do something completely different; mix it up and serve a pot pie or stir fry as the main dish. Either way, your guests will shriek in surprise when they realize your five types of pie AND chocolate chip cookies are vegan.

There are obviously many ethical and health reasons for becoming vegan, but it’s also a lot of fun. Especially during the holiday season, it forces you to get creative and learn about so many different types of food and preparations. From my experience, it has taken limiting my options to learn the endlessness of them.

Even if you’re not vegan, it’s always fun to try something new, even for a day. Especially considering that certain meats have been labeled a Type 1 carcinogen, now is definitely the time to try new options. And if you’re a vegan living in house of meat eaters, put on your apron and make a dish! Either way, the turkeys will be thankful.