I believe they should and so should you. 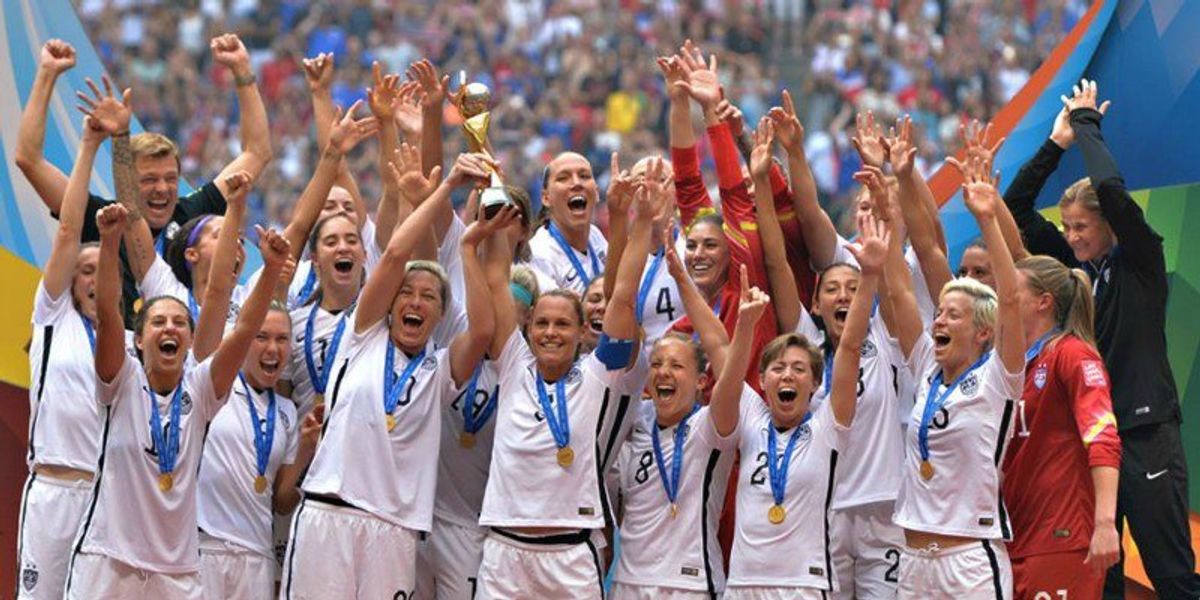 Whenever people ask me which professional team is my favorite team, I say the same answer I have said since I can remember. And that team is the United States Women's National Team.

It's not only because I love the game, but it is also because the USWNT has done so much for women's soccer and women's sports in America. They have shown young girls and boys what it takes to be successful and to fight. They have shown perseverance and dedication on and off the field. They made us believe -- and they still do.

And that's why I am with the USWNT in their fight against U.S. Soccer for equal pay.

1. They bring in more revenue.

That may be true for last year; however, U.S. soccer has estimated that the USWNT will generate about $8 million more than the men's team between April 2016 and March 2017. During this time period, the men's national team is preparing for a World Cup themselves. Yet the women will still bring in more revenue.

Now, I get it. The USWNT is playing more games during that time period compared to the men's team so, of course, they will bring in more revenue. But they are still generating more revenue. That warrants them at least a fair cut.

Apparently not, according to U.S. Soccer. The pay is so skewed that the women will receive less money for winning 20 friendlies than the men's team if they lost 20 friendlies. How does that make sense when the USWNT is bringing in more revenue?

Furthermore, women's soccer is becoming increasingly more popular, with higher viewership for televised games. That means that it is to be expected that the USWNT will continue to generate more revenue and more viewership. Isn't this something every American should want to see happen? Shouldn't we want the game to grow in all aspects?

2. They aren't filing a complaint against FIFA.

My favorite argument from people is that the men's World Cup brings in significantly more in revenue than the women's, and, therefore, the USWNT doesn't deserve equal pay.

People who argue this don't understand that the complaint is against U.S. Soccer, not FIFA. The payout from the World Cup comes from FIFA.

However, they are arguing for equal compensation from U.S. Soccer, not more prize money from FIFA. They are aiming more towards receiving more money from revenue they make for U.S. soccer domestically. Therefore, by people trying to argue that the women do not bring in as much for the World Cup, their argument is inherently flawed because they aren't fighting against FIFA (right now, at least). They may want to receive more bonuses from U.S. Soccer because of the World Cup, but they have no control over the payout from FIFA.

Now, you could say that because they don't receive as much from FIFA as prize money that they don't deserve equal pay or more bonus money. However, see my point above. They still make more revenue, even with the difference in World Cup prize money. That means that they should get a little more than they do now.

This may seem like a moot point, especially because winning does not necessarily translate to more pay. You would think it would, but it doesn't. But you cannot ignore the fact that the USWNT is an outstanding team and has a prolific championship history. They've won three World Cups and four Olympic golds.

Some people like to say that the competition isn't the greatest on the women's side. That may be true on the whole, but it is still not easy to win that many games despite the level of competition. Take for instance the men's national team. Last week, they lost to Guatemala 2-0. Guatemala is ranked 95th in the world.

That just goes to show you that you can lose games against lower-ranked and not-as-good teams. But the women keep going and keep pushing to be better, and that is why they are the best. That is why they will continue to be the best. They still have to show up and play to win. Which they do.

Like I said, though, winning does not translate to more pay. But what kind of message is U.S. Soccer sending to young girls and boys when they don't give at least equal compensation to a team who wins consistently, brings in a substantial amount of revenue and inspires a nation year after year?

At the end of the day, I see all sides of the argument. I understand that there are more facts and figures that go into the pay for the women's team (namely, things along the lines of better benefits and subsidizing the women's professional league). But, with the way that the women's team is performing alongside their growing revenue, you cannot argue that they should receive better compensation.

And for those of you out there that say women are just not as good at soccer, I'd love to see you play against Carli Lloyd, defend against Alex Morgan or shoot against Hope Solo.