A review; mild spoilers ahead 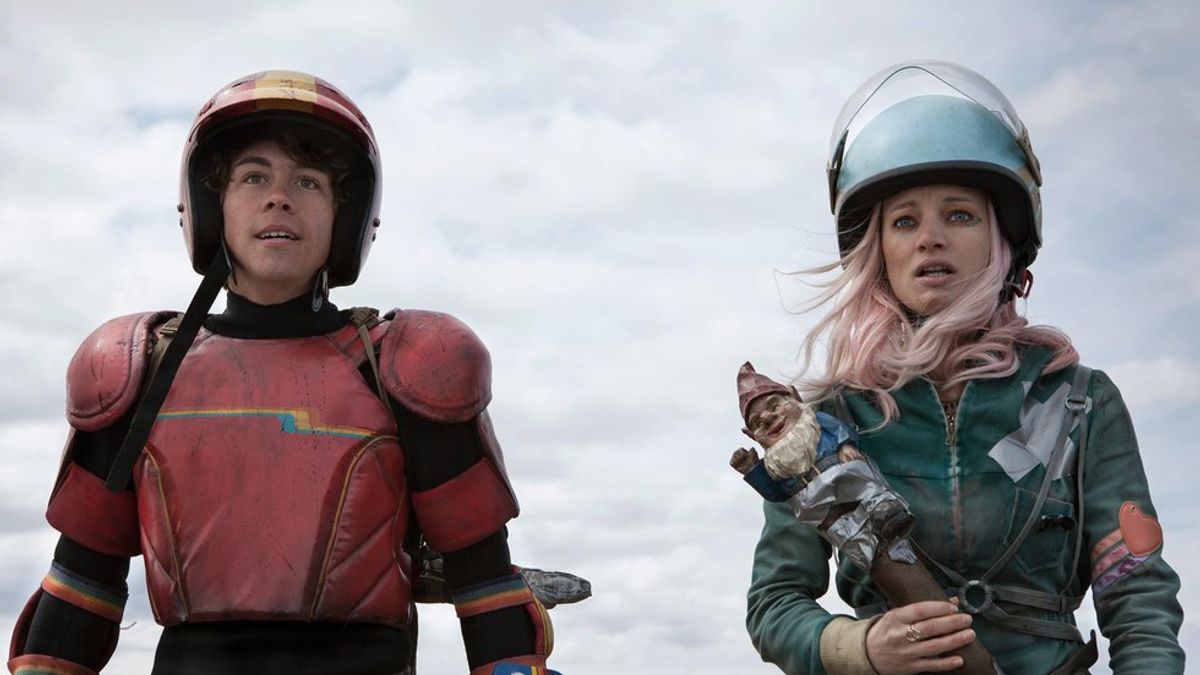 A good chunk of us, including myself, have had an exhausting week. And to be quite honest, I thought I didn’t have the heart to write about anything this week that wasn’t depressing. However, thanks to my friend’s roommate, I was introduced to the Netflix gem that is Turbo Kid.

Here is the synopsis from Wikipedia: The film follows the adventures of The Kid, a teenage boy turned superhero in the "Wastelands", an alternate 1997 Earth where water is scarce. He teams up with a mysterious girl named Apple and an arm-wrestling cowboy named Frederic to stop the tyrannical leader Zeus.

For an indie sci-fi, post-apocalyptic film, I’m quite impressed. I’m a huge fan of anything post-apocalyptic and dystopian-like with fiction, and I must say Turbo Kid gets a high grade when it comes to creativity. For example, how many post-apocalyptic movies do you know that are based in the 1990’s? Not filmed in the 90’s, but like the story is actually based in late 90’s? I just really like the idea and I feel like it isn’t done very often.

Something I notice often with indie films is that the cinematography and other film aspects are there, and they can be stellar, but the storyline itself tends to be weak and/pr the character interactions can seem awkward and forced. Thankfully, this was not the case with Turbo Kid. Yeah, maybe there was a bit of awkwardness between The Kid and Apple when they first met, but when a hyper-manic pixie dream girl wants to be your best friend out of (literally) nowhere after you’ve been alone for X amount of years, it’s going to be awkward one way or another.

I would like to give hella props to the stylist. Even though the characters don’t have the same depth as say those of a drama film or a Marvel movie, their outfits not only helped give the characters richer personalities and more depth, but it’s easy to tell who is on team “bad guy” and who is on team “good guy” without everyone really looking the same. Also the aesthetic is just something I can really dig.

As a makeup enthusiast, I would love to sit down and interview/rack the brain of the key makeup artist of this production. I want to know all of the details on how they designed everyone’s face, the thought process that went behind it, what they used for the special effects and what methods they used for application. I’m also curious about how much fake blood they ended up using and what they kind of product they used for the fake blood (it’s too liquidy to be your typical corn-syrup based blood). Spoiler: There is so much violence-induced, splattering-everywhere-type blood, I’m pretty sure Quentin Tarantino would shed a tear of joy.

Then we need to talk about the soundtrack: wow, guys, just wow. I’m terrible at explaining music because I’m not an expert, but the best way I can describe the soundtrack is 80’s space wave with Tron influences. I love 80’s new wave and I love Daft Punk/Tron type music, so this marriage that was created by the duo Le Matos, is music to my ears. The soundtrack was incorporated nicely into the film and you’re damn right I will buy the album.

My only real disappointment was the final fight scene. People seemed to just stand around for most the time and no one really seemed to take advantage on attacking their opponent at the right moments. There was a hesitancy to most of the fighting and some of it was awkward. But then again, I’m picky with that kind of stuff as a kickboxer and action movie junkie.

Overall, it was a fantastic indie film and I highly recommend you take time out of your day to go see it.