From a 28,000-pound pie to $2.5 million in annual revenue, here are all the stats that make up the National Cherry Festival. 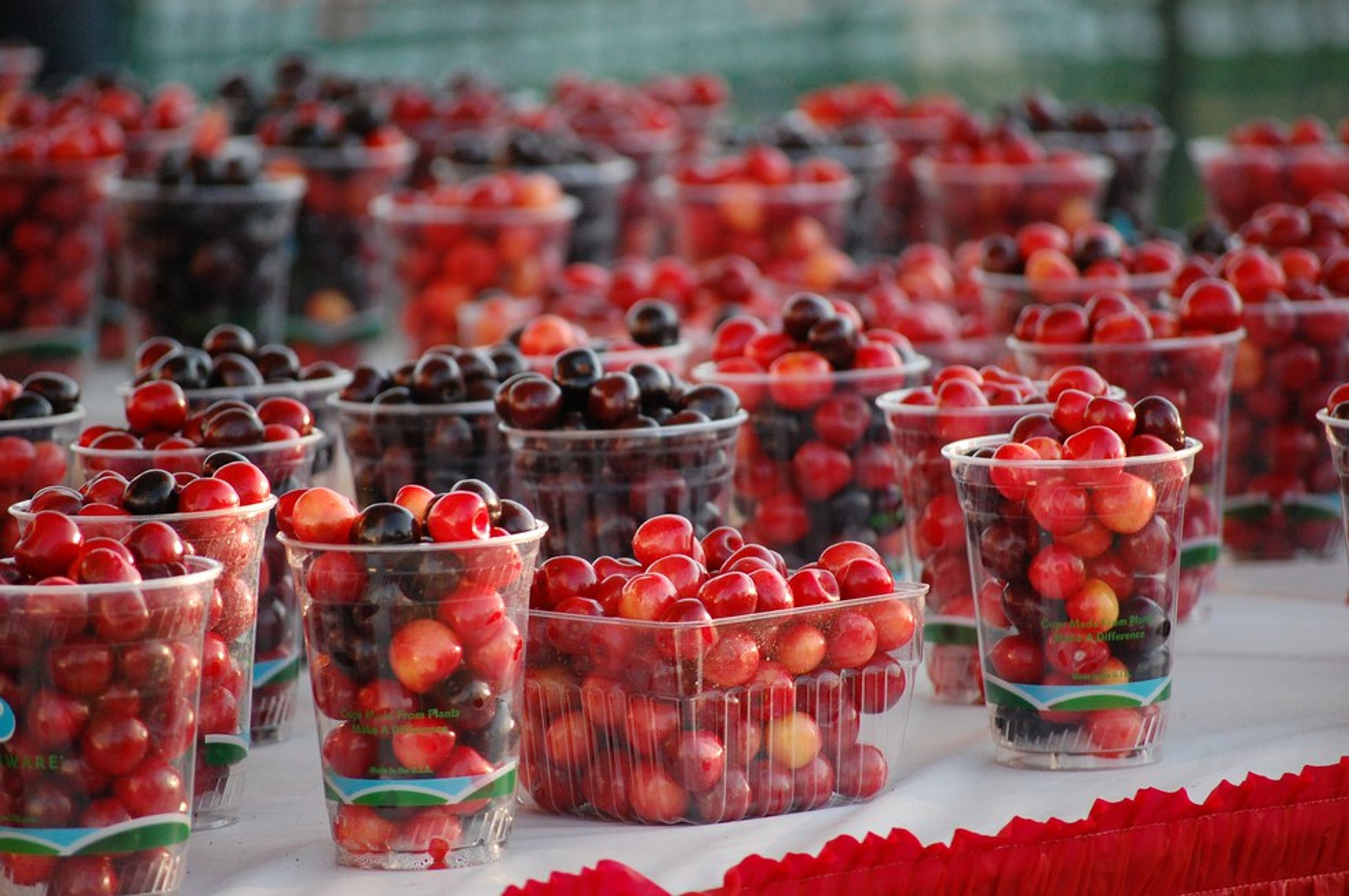 Northern Michigan’s “Blessing of the Blossom” began in 1910 as a humble springtime fete honoring the success of our local agriculture. Since then, Traverse City’s beloved festival has become known as the National Cherry Festival, an official behemoth for deep fried dough, beer tents, sparkling carnival rides, and even some local history and cherry lore.

Festival-goers can attend an entire week of events including live music, air shows, parades, and free activities for children, along with two evenings of grand fireworks displays over West Bay. Here are the stats and numbers that make up our city's most well-attended annual celebration.

The year that the informal “Blessing of The Blossoms Festival” became the legit, “National Cherry Festival” that we know and love today.

In pounds, the weight, of the 17+ foot cherry pie baked on July 25th, 1987 by The Chef Pierre Bakeries in Traverse City, Michigan. Curious visitors can check out the gigantic tin that once held the oozing, bubbly, record-making mess of sugared cherries and buttery crust along a skinny curve of road just above Boardman Lake on Cass Road.

Much to the chagrin of most locals, the longest National Cherry Festival held to date was 10 days long in 2014. It’s typically seven or eight days long.

The big bucks made during said longest National Cherry Festival ever.

The number of schools in the region that participate in the Prince & Princess Program in which a pair of students from each elementary school are chosen to participate in daily activities during the week of Cherry Fest. Also, their parents are chosen to donate their blood, sweat, tears and income to build extravagant floats to be displayed during the parades.

Collectively, the minimum amount of hours volunteers put into hosting events, cleaning up during and after them, directing visitors and creating an overall atmosphere of fun and celebration.

The number of sensory organs (that would be all of them) affected by motion sickness on rides like The Zipper and The Scrambler found in the center of the festival.

The average temp in Traverse City, Michigan during the first week of July when the National Cherry Festival begins.

The number of months the reigning Cherry Queen is obligated to a host of events, social responsibilities and personal expectations including, but not limited to the absence of tattoos, no dramatic hairstyle changes and a promise to not cohabitate with a partner before or during her reign.

The length, in feet, that Siren, a Dutch Shepherd Dog nearly reached during the Ultimate Air Dogs dock jumping event (Siren's official stat was 24 feet, 10 inches) during the 2015 festival.

The minimum number of festival-goers who soak up the sun, chow down on cherries and dangerously dart in front of traffic to get to the Open Space without any warning every single year without fail.

The available number of public parking garages in downtown Traverse City. Paltry, considering the aforementioned half-million-minimum visitors commuting in and out of the city limits during Cherry Fest week.

The number NOT to call to complain about fireworks, litter, jets, concert music, tourists, or homeless people unless said disturbances are threatening your life - not your comfort.

In pounds, the weight of loose garbage collected from the beaches of West Bay following the 2014 National Cherry Festival. The trash consisted mostly of cigarette butts, food wrappers, and fireworks debris. Since then, efforts have been made to do a better job of placing enough waste receptacles in convenient locations around the city.

The minutes it takes for bare skin to burn outside. Slather on a broad-spectrum sunscreen before taking off for hours of UV-filled festivities and toss the bottle in your bag for reapplication throughout the day.

The dollar amount for an entire Old Mission Cherry Pie from Grand Traverse Pie Company - decadent, juicy and worth every penny.

How many different cherry varieties exist around the globe. Montmorency, the type most commonly grown in northern Michigan is a tart cherry.

The number of tart cherry trees growing in Michigan, the majority of which blossom in orchards all over Northern Michigan counties including Grand Traverse and Leelanau. These little blood-red fruits are picked ripe in early-to-mid July (depending on the previous season's frost history) then sent off to be processed for jellies, jams, juice, and pies!

How many minutes it takes to fry up a crispy bucket of can’t-leave-without-trying-them Gibby’s Fries. Locals know that the taters beg to be doused in apple cider vinegar and ketchup or gooey cheese, the kind you get straight from a pump, then washed down with a fresh-squeezed lemonade, no matter the price.

The average amount of people in line ahead of you for a bucket of those delicious fries.

The days in which the National Cherry Festival isn't taking place. So go out and get your cherry party on!

Caitlyn Morral
St Bonaventure University
5754
Wordpress
Odyssey recognizes that mental well-being is a huge component of physical wellness. Our mission this month is to bring about awareness & normality to conversations around mental health from our community. Let's recognize the common symptoms and encourage the help needed without judgement or prejudice. Life's a tough journey, we are here for you and want to hear from you.