The best lyrics from the most well-written show on Broadway 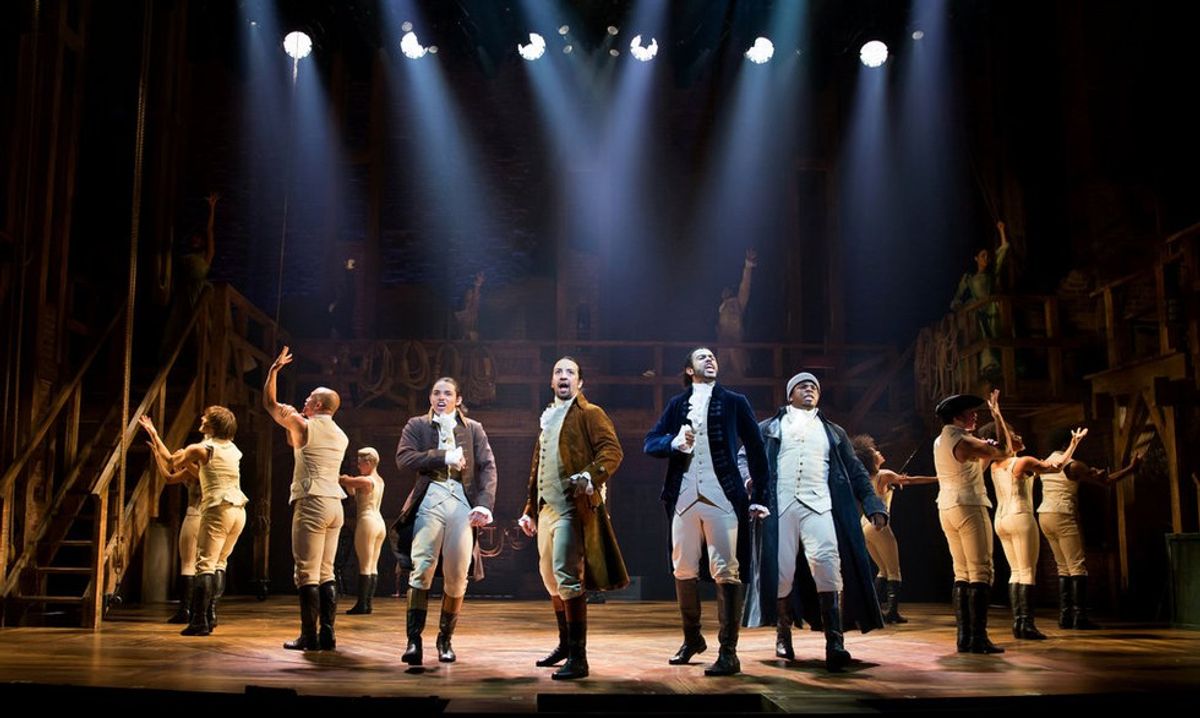 Anyone who knows me at all know that I’ve become obsessed with the Broadway musical Hamilton. When people hear about Hamilton, a hip-hop musical based on the life of Alexander Hamilton, their first reaction tends to be somewhere along the line of "How in the world does that even work?" And yet, it somehow does, as is apparent by its rave reviews and near-impossible-to-get tickets. The music for this show, written by Lin Manuel-Miranda, is truly something to behold, and this list is my personal favorite lyrics (in chronological order).

There are so many amazing lyrics in this show that it was nearly impossible for me to narrow it down to just 12. Honestly, this could have been a Top 20 list, or a Top 30, or Top 50. . .

But alas, I am but an overworked college student who simply can’t dedicate hours and hours of her life to gushing over hip-hop musicals about Alexander Hamilton. Unfortunately.

1. "How does a bastard, orphan, son of a whore and a Scotsman/dropped in a middle of a forgotten spot in the Caribbean/by providence, impoverished, in squalor/grow up to be a hero and a scholar?" — Aaron Burr, “Alexander Hamilton”

The opening lyrics to the show ask the exact question that it’s going to spend the next 2 ½ hours answering: How did this random nobody from the middle of nowhere become one of the Founding Fathers? As we’re about to learn, the answer is much more interesting than anyone (save Lin Manuel-Miranda and probably some historians) could have anticipated.

These lyrics are basically everything you need to know about Alexander Hamilton in Act 1 condensed down into 5 lines of rapping—he’s incredibly ambitious and determined to prove himself. The line “not throwing away my shot” is repeated many a time throughout the show, and takes on a double meaning—one referring to Hamilton’s shot at glory, and the other foreshadowing his fateful duel with Aaron Burr.

3. "We hold these truths to be self-evident that all men are created equal/And when I meet Thomas Jefferson/Im ‘a compel him to include women in the sequel!" - Angelica Schuyler, “The Schuyler Sisters”

“The Schuyler Sisters” is not only a great introduction to the two main female characters, Angelica and Eliza (a.k.a the future Mrs. Hamilton), it also functions as a pretty great girl power anthem. It’s not often you see women play an important role in stories about the American Revolution and the Founding Fathers, let alone proclaim that the most oft-quoted line from the Declaration of Independence is perhaps a little sexist. This song and these lyrics in particular make it clear that the Schuyler sisters (or at least, Angelica and Eliza—sorry, Peggy) are going to have a very definite impact on the show.

4. "And when push, comes to shove/I will send a fully armed battalion to remind you of my love!" — King George, “You’ll Be Back”

Ah, King George. In a very deliberate political statement, he’s the only major character to be played by a white actor, and is played as over-the-top as humanly possible. This song, which for the first few verses plays like a creepy, obsessive love song, suddenly and abruptly takes a turn for the violent in a line that gets a pretty big laugh for it’s sheer absurdity.

5. "I know my sister like I know my own mind/You will never find anyone as trusting or as kind/If I tell her that I love him she’d be silently resigned/He’d be mine/She would say I’m fine/She’d be lying!" — Angelica Schuyler “Satisfied”

This line is a heartbreaker. Having fallen in love with Hamilton herself, Angelica willingly stands aside so that her sister can be happy with him. There’s not much else to say, beyond that these lines, and indeed the entire song, are both sad and incredibly beautiful, and that Lin Manuel-Miranda can do no wrong.

I know I said that this list was in no particular order, but this line is the exception; in my humble opinion, it’s the best verse in a show full of amazing lyrics. It’s poignant, universal and yet completely applicable to the character who sings it and his situation, and just beautifully written.

7. "Let me tell you what I wish I’d known/when I was young and dreamed of glory/you have no control/who lives who dies who tells your story" — Washington, “History Has It’s Eyes On You”

As this line and the title of the song it comes from makes clear, the characters in this show are very aware of the impact their actions will have on the future, and that the way in which their stories will be told is out of their hands. It’s a stark reminder of the fact that everything about historical figures, up to and including the ones in this very show, is dependent on the framework through which they are viewed; in other words, by “who tells (their) story.”

8. "Immigrants/We get the job done!" — Lafayette and Hamilton, “Yorktown (The World Turned Upside Down)”

Fun fact: Lin Manuel-Miranda actually had to add bars to this song to account for the massive crowd reaction that this line consistently gets. And it’s easy to see why: in today’s political climate, we often forget that our country was in large part built by immigrants, and this line is an unabashed reminder of that fact.

Cabinet debates between Alexander Hamilton and Thomas Jefferson that take the form of rap battles were something I didn’t know I needed in my life until now. While there are plenty of great disses in the two ‘Cabinet Battles,’ (shoutout to “Should we honor our treaty King Louis’s head?/’Uh, do whatever you want, I’m super dead’”), this one takes the cake for me. As much as Jefferson preached freedom and liberty for all, the man owned hundreds of slaves, and hearing him called out on his blatant hypocrisy is oddly cathartic, even if it’s only addressed to a fictionalized version of him.

10. "I’m in the cabinet. I am complicit in/Watching him grabbin’ at power and kissin’ it/If Washington isn’t gon listen/To disciplined dissidents, this is the difference/This kid is out!" — Jefferson, “Washington On Your Side”

Speaking of Thomas Jefferson: Daveed Diggs (who played both Lafayette and Jefferson in the original Broadway run) is an absolutely incredible rapper, and story goes that Lin Manuel-Miranda actually made his parts more complex in rewrites because he knew Diggs could handle it. This line, along with the entirety of “Guns and Ships” are perfect representations of the man’s talent—the sheer amount of internal rhyme, alliteration, and assonance present in these lines combined with the speed at which they’re rapped is mind-boggling.

11. "I had only one thought before the slaughter/this man will not make an orphan of my daughter!" — Aaron Burr, “The World Was Wide Enough”

The emotional impact this line has comes mainly from the delivery, which is an absolute punch to the gut—just go listen to it it you don’t believe me. It also makes us at least somewhat sympathize with the man who’s about to kill the main character, which is quite the feat.

12. "I put myself back in the narrative/I stop wasting time on tears/I live another 50 years/it’s not enough" — Eliza Hamilton, “Who Lives, Who Dies, Who Tells Your Story”

The final song of the show features Eliza taking control of not only her own life (or "narrative") but her now-deceased husband’s, and indeed that of the play itself. It’s also a testament to how strong the character is, especially considering the sheer amount of loss she suffers throughout Act 2. The song as a whole tells of how Eliza worked tirelessly to ensure that her husband’s story was told; in fact, without her careful curation of Hamilton’s legacy, it is doubtful that the show itself could even exist, something that this song pays tribute to.

To say that this musical is revolutionary is an understatement; if you haven't already, I urge you to give it a listen. It's more than worth the time.

Nicole Marie Nigro
Individual Creator
8364
c1.staticflickr.com
Where to start...... Let me start with the cliche that life throws us curveballs and what we do with it is what counts.