Could The Sinking Of The Titanic Be The Greatest Insurance Fraud Scheme Ever?
Odyssey
CurrentlySwoonLifestyleHealth & WellnessStudent LifeContent InspirationEntertainmentPolitics and ActivismSportsAdulting
About usAdvertiseTermsPrivacyDMCAContact us
® 2023 ODYSSEY
Welcome back
Sign in to comment to your favorite stories, participate in your community and interact with your friends
or
LOG IN WITH FACEBOOK
No account? Create one
Start writing a post
Politics and Activism

Could The Sinking Of The Titanic Be The Greatest Insurance Fraud Scheme Ever?

One theory suggests the famous liner was sunk on purpose. 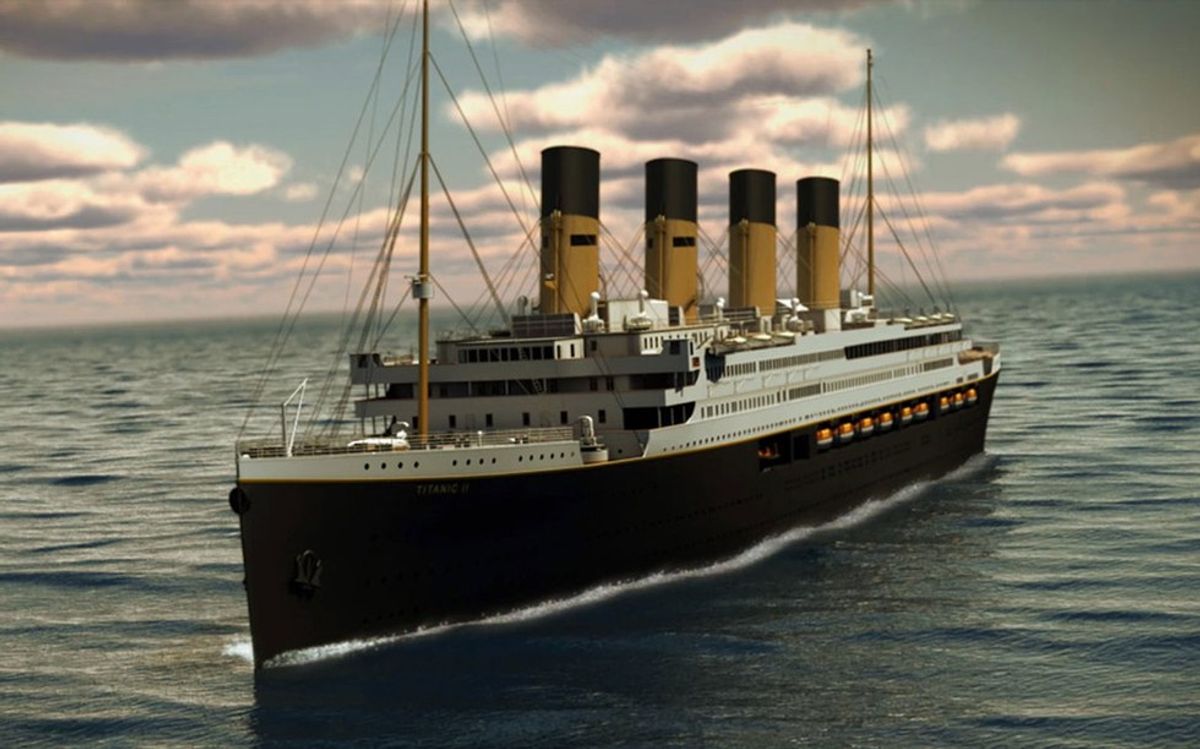 Unless you have been living under a rock for your entire life, you have heard of Titanic. And no, I am not referencing the movie which made teenage girls around the globe swoon in 1997. I’m talking about the actual ocean liner that was, in its day, the epitome of luxury. Titanic, owned by the White Star Line, was built with the intent to surpass all other vessels currently constructed. She was beautiful and, for all intents and purposes, might as well have been a floating palace. On April 10th, 1912, she pulled away from the harbor in Southampton to begin her maiden voyage which would eventually conclude with her docking in what was to be her home port, New York City. In an effort to build more interest and subsequently more press, J. Bruce Ismay, director of the White Star Line, urged Captain E.J. Smith to push the boilers on the new vessel and increase her speed. His goal was for Titanic to surprise everyone and arrive in New York on Tuesday, April 17th, well ahead of schedule. This would ultimately be just one of the fatal mistakes made which cost the lives of 1,500 people, the foundering of the magnificent ship, and the reputation of the White Star Line.

Flash forward to 2016. Theories abound as to what the main culprit was in causing the tragedy that befell the marvelous ship. It goes without saying that the iceberg it collided with is, of course, to blame in a major way, but historians are also working several theories to ascertain just exactly how Titanic ended up in the path of the iceberg to begin with. What happens though when one of those theories proposes something so outlandish that it seems more like a bad comedy skit on "Saturday Night Live" than it does a real possibility? Is it actually possible that the sinking of the Titanic was just an elaborate hoax with the intent to collect millions? That is exactly what author Robin Gardiner and countless others are suggesting.

In his book, “Titanic: The Ship That Never Sank?”, Gardiner states that it was not the Titanic that sank on that cold April night, but that it was, in fact, her sister ship the Olympic. The back story into this theory begins with the accidental collision of Olympic with the military vessel the HMS Hawke. This collision damaged the steel and beams within the front of the Olympics’ hull. However, the owners of White Star Line did not disclose the full extent of this damage to anyone. Due to the severity of the damage, it would have been more cost effective to cut their losses with Olympic rather than attempt to repair her. The accident between these two vessels was determined to be the fault of the Olympic, and because of this, the insurance company refused to pay out the money needed to repair her. The theory suggests that with the White Star Line already facing financial trouble and now the possibility of a ruined reputation, they swapped the Olympic out for her sister ship the Titanic. They swapped out a few nameplates and other essential identifying characteristics on the vessel, and then the Olympic sailed off disguised as the Titanic who was setting out on her maiden voyage. The theory further suggests that the two ships were exchanged for each other in order for the Olympic to be intentionally scuttled and the insurance money collected for the seemingly freak accident which would occur.

Gardiner further argues his point by stating that this swap is the reason that the shipyard had trouble hiring crew members for the ship. Suspicion says that a rumor about the proposed scam was circulating the shipyard and was, in fact, responsible for the shortage in crew as well as some last minute ticket cancellations by some very prominent members of society including JP Morgan, the financier of the White Star Line. If this theory does, in fact, turn out to be truth and not hearsay, then the history of this ill-fated vessel would be forever changed and the way people view the tragedy forever compromised. So, this begs the question, why would the shipping company even bother? If the theory is true, then no doubt JP Morgan, whose money funded the line of Olympic Class liners (the Olympic, Britannic, and Titanic), knew of the plan to recoup their investment. But why would he go along with the scheme, when he was a billionaire and without a doubt would barely feel the effects of the loss in the first place? It leads one to wonder if the possibility of being caught and subsequently charged with the murder of 1,500 people would even be worth the effort at all.

I’m on the fence about what to believe. I am completely enchanted and fascinated by Titanic and everything that surrounds her. It has always amazed me that so many different stories and scenarios were played out simultaneously within a matter of hours. The beauty of the band playing right up until the ship slipped below the water, the wireless operators who refused to leave their post, and the captain who went down with his ship. They were all humans, people with families and lives, just like you and me. And yet, fate made them legends in their own time within the span of just two and a half hours. In some ways, I am sad to see that someone has even considered the possibility that this tragedy was just a hoax all along, but in other ways I am intrigued by the possibility. If it is true, it is one of the greatest and most elaborate insurance scams in history. With all the witnesses now gone, I guess we’ll never really know for sure.

Nicole Marie Nigro
Individual Creator
9579
c1.staticflickr.com
Where to start...... Let me start with the cliche that life throws us curveballs and what we do with it is what counts.