The Truth About Situationships

The Truth About Situationships

It's time to be honest with yourself. 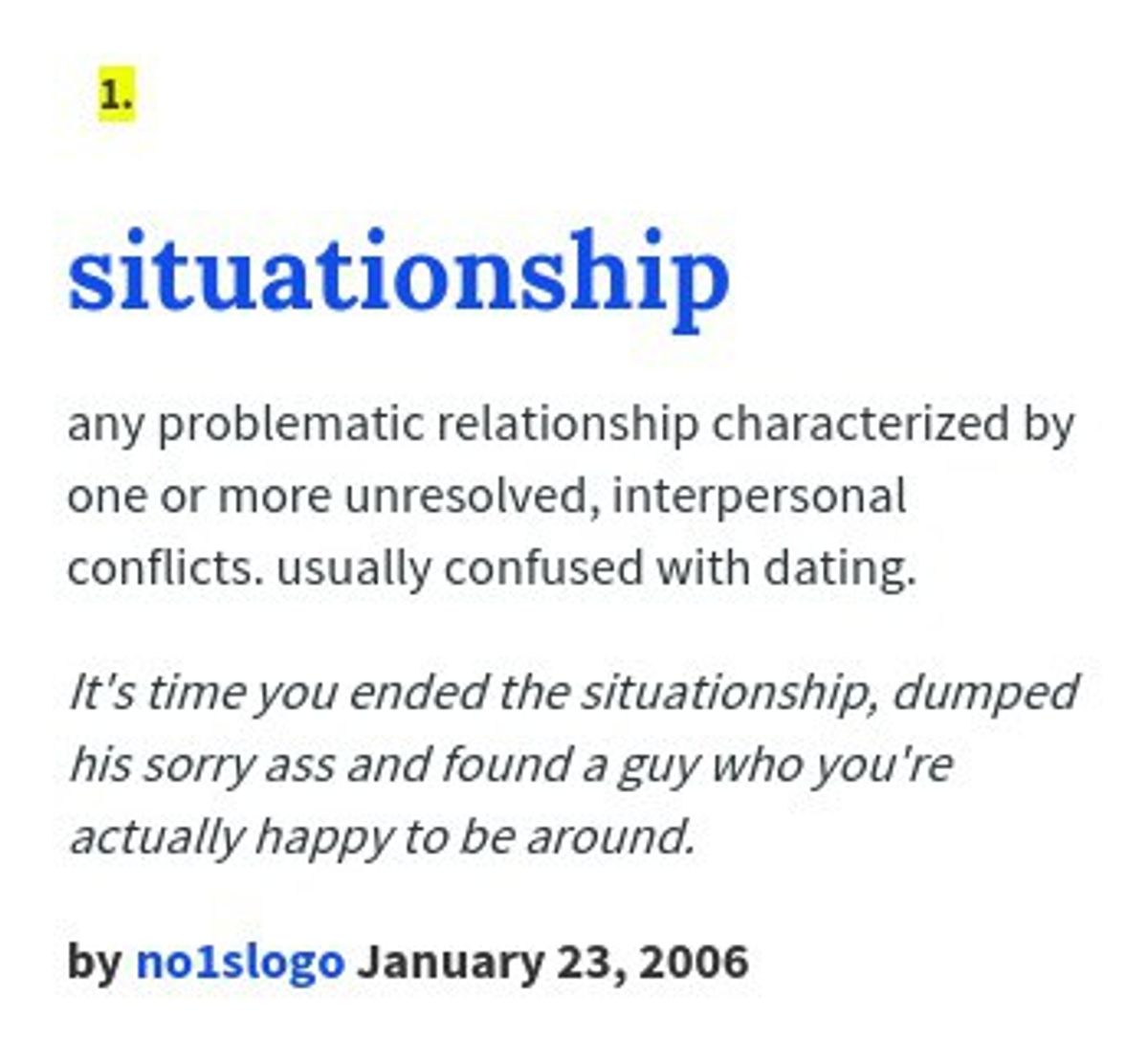 How many people do you know that are in an actual relationship? Facebook Official. Titles granted. Mutual agreement on their relationship status. Not many, I would bet. Nowadays, dating is something of the past. I envy our parents generation, when people actually went out and “courted” and pursued their love interest. Nowadays we have all of these new terms to get around saying that we are actually in a relationship with someone. Either you're "chilling," "talking," or "seeing where it goes." People fall for these pseudo-titles and mistake them for real relationships when, in reality, it is a situationship. What is a situationship? Let’s define it.

According to the Single Woman Blog, "A Situationship is a romantic involvement between two people which include, but not limited to, frequent dating, house visits, (potential) parent meeting, (potential) friend sharing, sex...lots of sex, and the catching of feelings by at least one person. However, there are absolutely NO titles established in this union. No rules, no regulations, no responsibility, NO BOUNDARIES!"

When people ask about you and your significant others relationship status, you fumble over your words “We aren’t dating but…we aren’t Friends-With-Benefits either...” you never have a solid answer for what you are.

There is minimal communication. Your suitemates know more about what you did this past week than your "person" does.

You think about becoming more than whatever it is that you are, but are too afraid to say anything and rationalize to yourself that having something is better than nothing. That is your mantra. Whenever you begin to question anything you think to yourself “At least I get something.”

Any of these sentiments seem familiar? If so, you are in a situationship. Don’t panic. I’m here to help. I am here to tell you the truth about situationships. Being a full-time college student is very stressful and, often, people don’t have time to pursue relationships and so they prefer the laid back obligations of a situationship. Just occasional sex. If that is what you are looking for, go for it. If you don’t want anything serious and can ensure that feelings will not be factored into your decision to have casual sex with someone, then yes, do it. As long as both parties involved know that this will in no way shape or form lead to a committed relationship.

But if this is not what you want and you think that by conforming to this lax affair you will eventually get the relationship you want, you're mistaken. Don’t do it. Don’t go into a situation like that when you know that is not what you want. Don’t trick yourself into thinking that it’ll eventually lead into a relationship. Because, nine times out of 10, it won’t. And then you’ll realize that all you’ve done is waste your time. Time you will never get back, all for someone who doesn’t even treat you the way you want to be treated. If you know what you want in a relationship, don’t settle for anything less. If you want a friends-with-benefits situation, pursue being friend with benefits. If you want real relationship titles, wcw posts, and the whole nine yards, then go after that. Don’t stop until you’ve gotten what you want.

The truth about situationships is that they aren’t for everyone and you can’t enter into one with a mentality that it will eventually involve into something more. You need to just take it for what it is, no hidden stuff. Don’t alter your plans for some girl or guy. Choose yourself every time. It is okay to be selfish; do what you want to do without considering anyone else’s influence or input.