"The State of the Union is Strong," And Other Lies
Odyssey

"The State of the Union is Strong," And Other Lies 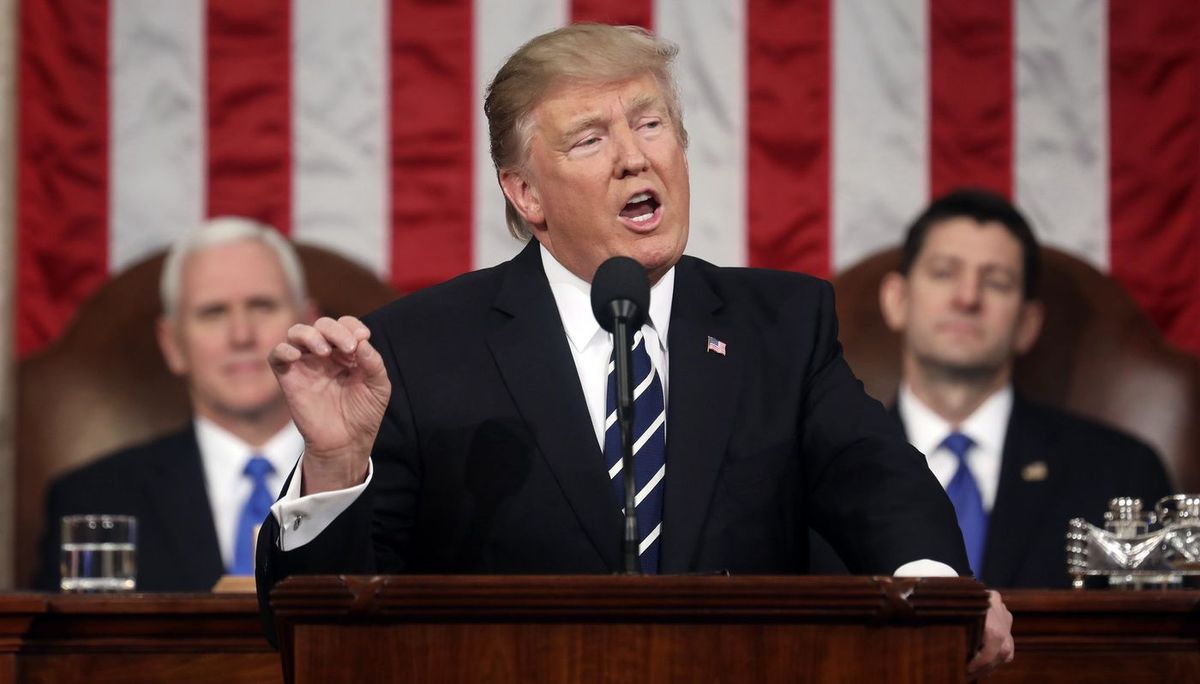 Last week I sat in the Clapp Library, here at Wellesley College, and watched the entirety of the State of the Union address. Donald Trump's speech was not only full of false facts and lies, but it also consisted of multiple moments of inappropriate messages and gestures as well as unearned praise for the "good work" Trump's administration has "accomplished".

Trump's campaign set the precedent in America for, and I'll use a term he coined, "fake news". This means that Americans are not confident in their news sources but also are not able to deduce what is fact versus fiction, especially what's coming out of the White House and specifically the President's mouth. The State of the Union address was a prime example of the Trump administration playing to this uncertainty. In addition, the speech highlighted many "accomplishments" the administration has made, which are actually bad for the country. Lastly, the speech reminded us that Donald Trump is anything but presidential.

The fact checkers had a field day on this speech for sure. Trump averaged one false claim every 4.5 minutes. Wild. Not only did the president claim the state of the Union was strong, but he claimed that America was safe. I believed I laughed when I heard this. If this president believes our country is safe, he should look again at the number of Americans killed by the police in January 2018 alone (105 to be exact). Trump claimed Americans are finally starting to see a rise in wages, when in fact, wages have fallen. The big false claims of night came with statistics. "24 million jobs created since Election Day" and "the lowest unemployment rate for black/Hispanic Americans ever." Ever? Really Donald? First of all, this year we have seen the slowest gain in jobs since 2010. Second, Trump bragged about the lowest unemployment rate for black Americans, when in fact the unemployment rate rose sharply in January after years under Barack Obama of dropping steadily. Let's remind ourselves that much of the great things about America now are because of President Obama's eight years in office. Don't let Trump take credit for Obama's accomplishments.

Donald Trump has "accomplished" many things in his first year as president. However, many of these "accomplishments" are actually harmful to Americans and the country as a whole. Nevertheless, Trump took the majority of his speech to praise himself and his administration, including the elimination of the individual mandate, which, as I stated in a previous article, will allow Trump to tank Obamacare. Trump's tax plan received a good amount of air time and praise despite it giving unjust power to big corporations. Trump's declaration that America "must modernize and rebuild [its] nuclear arsenal" came with huge applause; however, it perpetuates the game of chicken America has been playing with North Korea. Of course Trump also mentioned North Korea explicitly, explaining we must use maximum pressure to ensure our dominance. I'm guessing this will not deescalate tensions between the US and North Korea. Trump had an array of guests, including a North Korean refugee; too bad the United States doesn't allow North Korean refugees asylum. Overall, the "good work" Trump attempted to brag about was far from commendable.

While watching the speech, I had moments of disbelief as Donald Trump made gestures and comments that not only demonstrated how unpresidential he is, but screamed it. First, in introducing his initiative about lowering the price of prescription drugs, Trump promised that "prices will come down, just watch," the crowd laughed. Not only does the laughter expose Trump as the joke that he is, but the claim itself is a perfect example of Trump's all talk, no plan or action track record. When introducing the topics of paid family leave and reforming the prison systems of America, Trump gestured to Democrats, as if they should be thanking him for paying attention to causes they are actively fighting for. Each time he did this it became more and more inappropriate; Democrats should not have to grovel at the President's feet in order to make necessary changes, and neither should the American people. Trump also spent time highlighting the dangers of gangs, which was a big, expected focus of the speech. Though the stories of two teenage girls losing their lives to gang violence were tragic and appealing to the room's humanity, they also demonized immigrants. Trump used their stories to paint immigration as a danger to American citizens, again ostracizing a broad part of the country. This includes DREAMers, who have been deported or threatened to be deported ever since Trump took office. Trump claimed in his speech that "Americans are dreamers too," but, Mr. President, DREAMers are Americans too. These DACA recipients are as American as I am. They came to this country as children; they studied here, worked here, contributed to society here and though they were not born here, that should not constitute their removal from THEIR country. Trump's rhetoric the past few months promoting an America first mentality is dangerous for all of us. We do not live on this planet alone, let us not forget that.

Trump concluded his speech calling for us to "protect the American way," that "we must be confident in our values and trust in our God." Republicans were left standing at the conclusion of the speech, chanting USA, while Democrats preceded to leave the floor. Donald Trump, I believe we have very different perceptions of the "American way," and I trust in my God to reveal to us all what His version of that way truly is.