"The Outing" And How It Broke Media Culture

"The Outing" And How It Broke Media Culture

Not That There's Anything Wrong With That 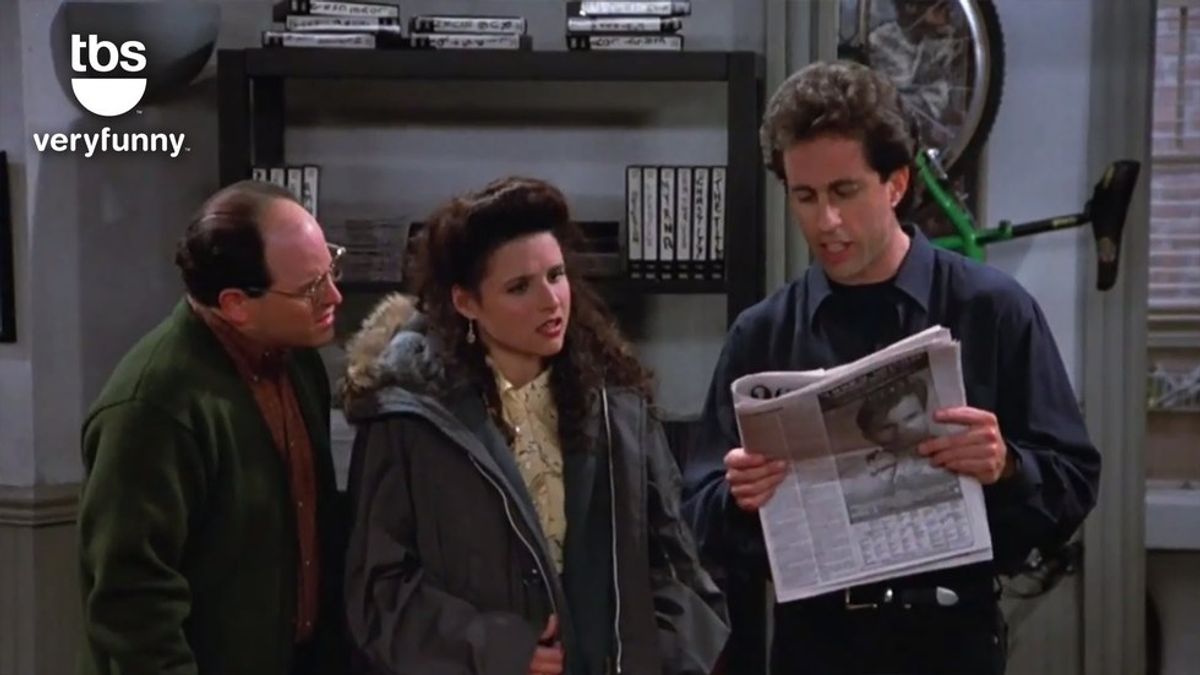 If you were to tell me that I would be watching Seinfeld as a class lesson in my senior seminar class, I would have told you that you were insane. But in fact, as I walked into class that Tuesday night and looked at the projector screen I saw Seinfeld right in front of my face and I was ecstatic! This is where all the money goes to when you go to college everyone, it goes to watching an episode of Seinfeld.

But it was more than just sitting back and watching Seinfeld with your friends and classmates. The professor wanted us to watch for the stereotypes that were being shown within the episode that was being shown. That particular episode was "The Outing".

"The Outing" was shown on February 11th, 1993 and was centered around a prank gone wrong by Elaine when she sees two women eavesdropping on hers, Jerry's and George's conversation. Elaine goes on to say that "there is nothing wrong with you two being gay" along those lines. One of the women (her name is Sharon) who was eavesdropping is a news journalist who was meeting with Jerry to talk about his comedy work.

Throughout the episode, Jerry and George are constantly denying being gay, but say the line "Not that there's anything wrong with that" to avoid being seen as homophobic. The story is released on a school newspaper and eventually gets picked up by the Associated Press. Soon everyone knows from family to friends about Jerry and George's "love life".

All of this soon comes to an end when George decides to use his "orientation" to get out of his relationship with his crazy girlfriend Allison. Allison doesn't believe it and is proven right when she and George go to Jerry's apartment only to find Jerry and Sharon making out on his couch. And so ends the crazy story of Jerry and George being "in love".

I thought that this episode was hilarious! I've never sat down and watched the whole Seinfeld series, but that one episode alone had me hooked and now I'm ready for a Seinfeld binge watch.

But back to the class lesson. After the episode was shown, we were told to write down what kind of stereotypes that were shown and if this particular episode were to be shown today.

This episode contained many different stereotypes of gay men, too much for one person to comprehend. Like one was the owner of a diner with an earring in his left ear or George loving musicals and wanting everything to be clean. Remember, this episode was released in 1993 and being LGBTQ was still seen as a taboo.

I felt that this episode shined a light on stereotypes of gay men and used it for, in my opinion, as a personal good. It shined a light on the LGBTQ community during a time where being queer wasn't socially accepted. Seinfeld use of the line "not that there's anything wrong with that" has been used to this day in reference to the fact that there is nothing wrong with being gay.

This is a discussion that can be used in any social setting and can lead to a discussion of P.C culture and how it affects the media that we see today.

Who knew that a Seinfeld episode could be used as a lesson in class?