It is important to stand together. 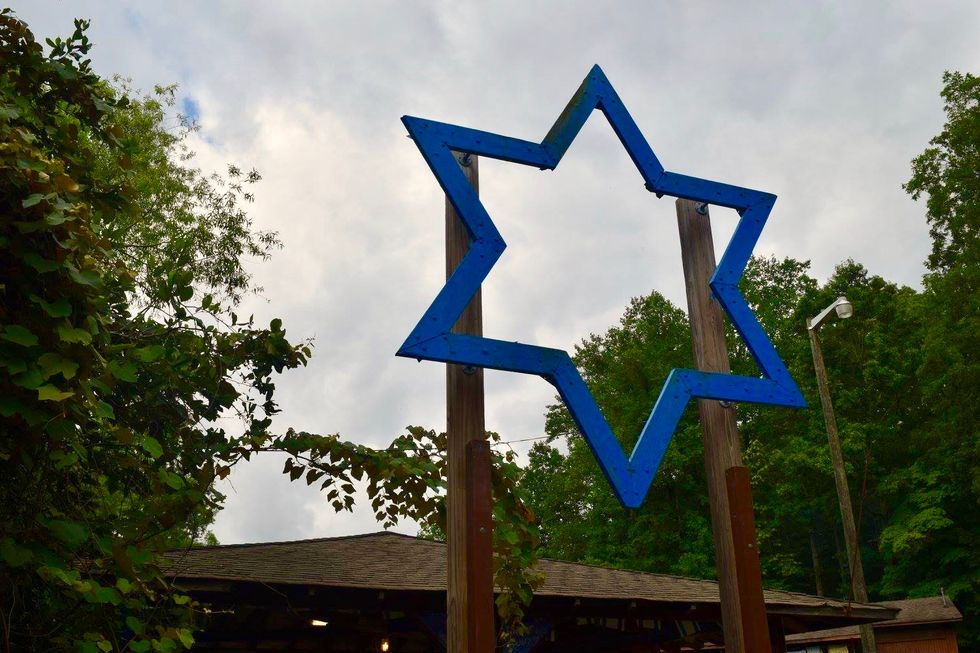 The most liberating moment of my life was getting a "חי" tattooed behind my ear in Israel.

When I think of Judaism and tattoos, my mind immediately jumps to concentration camp number tattoos used to take away any sort of individuality or humanity. I've known for a long time I wanted a Jewish tattoo because to me it felt like I was reclaiming little bits of the power stolen from the ink used for evil, now it was edged into my skin with power and pride.

"חי" translates to live, or living. This is a symbol that always resonated with me because like it or not if there is one thing Jews in any history book or bible story have done, it's continued living. And for each generation, it seems like there is a new obstacle to overcome.

I've been dealing with what I know now are microaggressions as long as I can remember. I had a European history teacher who would point at me whenever the Jewish people came up in the lesson plan. He knew that I would say they were blamed for that nation's problems, and he would laugh and tell me I was right. The class would giggle that this "bit" of our normal class routine and then we would move on to talk about the Spanish or the French.

But I think the worst one was my sophomore year of high school. A student dropped a penny in front of me, laughing as he asked if I would pick it up because I was Jewish. I was shocked, I was upset, but mostly I was scared, was this funny to other people? I saw the only other Jewish kid look at me helplessly, he was friends with the boy who dropped it. But I wasn't going to be silent, I screamed and told him how offensive that was and marched straight to my guidance counselors office.

I was asked so many questions by administrators I had never seen before. But two weeks later nothing had happened. I was then pulled into an office and was told, "because of the students upbringing he was ignorant as to what that meant." What I've failed to mention up until this point is that the boy who dropped the penny, was Black. Because to me, that detail didn't matter. But my school asked it's only Black administrator if she knew what that meant, and she didn't, therefore he couldn't possibly.

He received no punishment, and I had my eyes opened to the reality of minorities not standing with other minorities. I am in no way trying to say the Jewish experience is comparable to the Black experience, or Latinx, or Asian, or any other minority group's experience. I'm saying that in my mind, it always made sense for the people who had been burned before to try and keep others from feeling that pain.

There has been a flood of support for the Black Lives Matter movement and I think that that is absolutely amazing and long overdue. But hate anywhere supports hate everywhere.

I spoke to a girl from high school today, a girl who was the president of the Latin Hispanic Heritage Club, I, however, remember her as the girl who my freshman year of high school told me I couldn't possibly understand what culture was because I was white.

I remember her confusion when just months after the penny was dropped I was reading a poem in the multicultural showcase about anti-Semitism. But eventually, I noticed a change in her and the way she spoke to me and others. This growth is the most important thing today. And now, we spoke because she was the only non-Jew I saw post about the recent flare in anti-Semitism. She told me how important it was to her that those being discriminated against stick together.

I have a lot of privilege being white, I'm not ignorant to that fact. But acting as if anti-Semitism no longer exists is the fastest way to bring back the actions of the past. People associate Jews with money and power, leading to an infinite amount of jealousy and anger. These stereotypes are vicious, and if we don't condemn athletes, celebrities, "jokes" from teachers, they will continue to snowball right back into the history no Jew wants to have to live.

My tattoo is a constant and important reminder of where my people came from, and because of that, I will never turn my back on other communities being treated like they are less than. People should be treated like people, to me, it is as simple as that.