The Importance Of Safe Spaces

The Importance Of Safe Spaces

Safe spaces aren't places where entitled liberal college students come to whine, they're places that foster respect for all people. 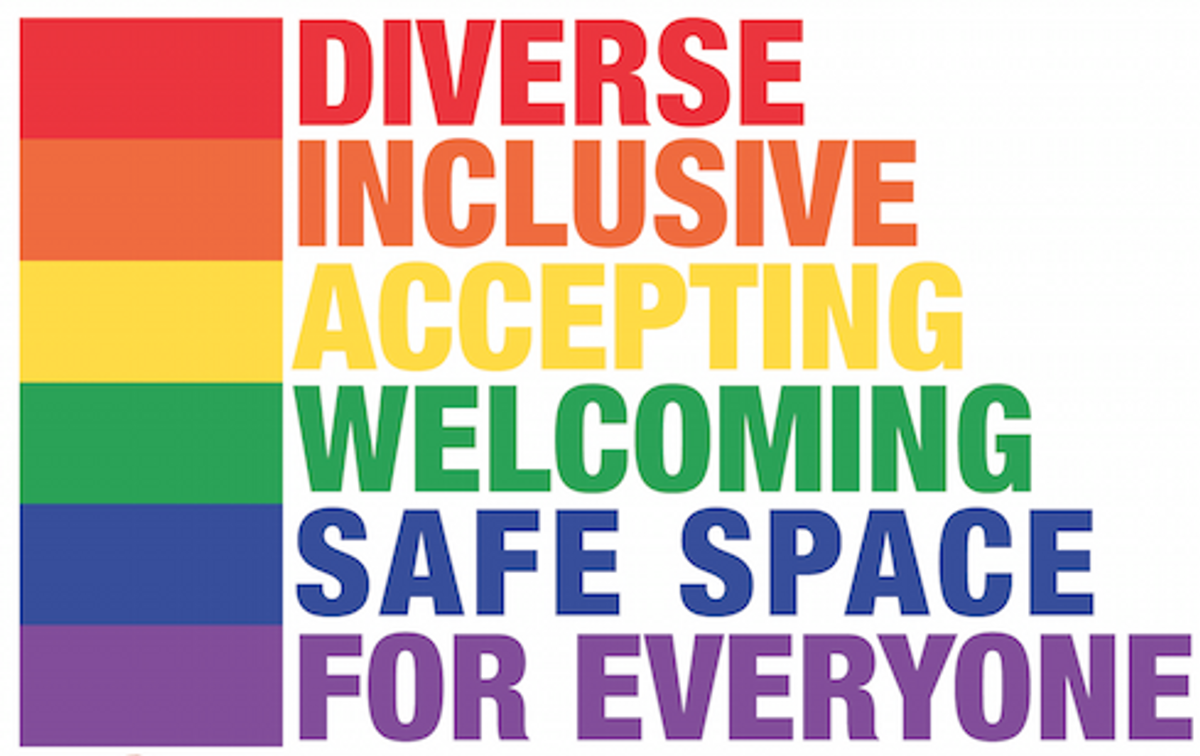 There’s been a lot of talk lately about safe spaces, and people are highly polarized. Some say that safe spaces are compulsory, and others say that they just cater to coddled millennials. However, I don’t think that either of those viewpoints are completely true, and here’s why.


According to Advocates for Youth, which provides resources for sex ed, STD prevention, and safe sex as well as LGBTQIA+ resources, a safe space is “a place where anyone can relax and be fully self-expressed, without fear of being made to feel uncomfortable, unwelcome or challenged on account of biological sex, race/ethnicity, sexual orientation, gender identity or expression, cultural background, age, or physical or mental ability-- a place where the rules guard each person's self-respect, dignity and feelings and strongly encourage everyone to respect others.”

So a safe space is just a place where people don’t need to fear being silenced because of who they are or what they have to say. That sounds like an environment that will foster serious, thoughtful discussion, not one that caters to a certain group.

But then again, to people who are used to privilege, equality sure feels like oppression.

What do safe spaces exactly do then? For one thing, like trigger warnings (which I wrote about in a previous piece), they open up the floor for serious discussion about sensitive topics. By adhering to the rules of the safe space, all the participants of a conversation are saying, “Hey, I respect you and your opinion and I want to talk about this without hurting anybody.” Although safe spaces are a relatively new construction, respect is an age-old idea. In fact, serious conversation about sensitive topics can never happen without respect.

In this way, I think safe spaces are some of the most respectful environments because everyone is specifically asked to be mindful of others’ feelings and opinions. For people who are LGBT, that means nobody is going to ridicule them or belittle them based on their gender identity or sexual orientation, and for people of color, that means speaking in a space where no one will discount them based on their race.

For both these groups, safe spaces are important places to discuss problems of inequality or oppression, and conversations that take place in safe spaces also lead to resolutions and action in the outside world.

Still not convinced that safe spaces are helpful for fostering communication? Don’t worry, they’re not everywhere. Most safe spaces are in places chosen specifically so that everyone there will be very aware of the space they have enter. And another good thing: exit is always unimpeded.

If you’re ready to be in a safe space and help foster communication about serious topics, then there are places on the OWU campus specifically designated for this, and they’re marked with this sticker:

According to a representative on the OWU Spectrum Resource Center’s page, “There are many older Safe Space stickers around campus, especially in professors' offices. Those who have the newest training, which focuses on understanding about trans students and gender, have stickers which look like this. Currently these are only in certain SLUs—COW, PJ, Tree House, Honors House, and SAGE.”

So consider the importance of a safe space for real, honest communication about issues that are relevant to everybody involved is a consideration that should be made. Are safe spaces right for you?