The 6 Types Of Cousins We All Have
Odyssey

The 6 Types Of Cousins We All Have

We all have that one cousin who we identify with or the one we want to hang by the foot in a tree. 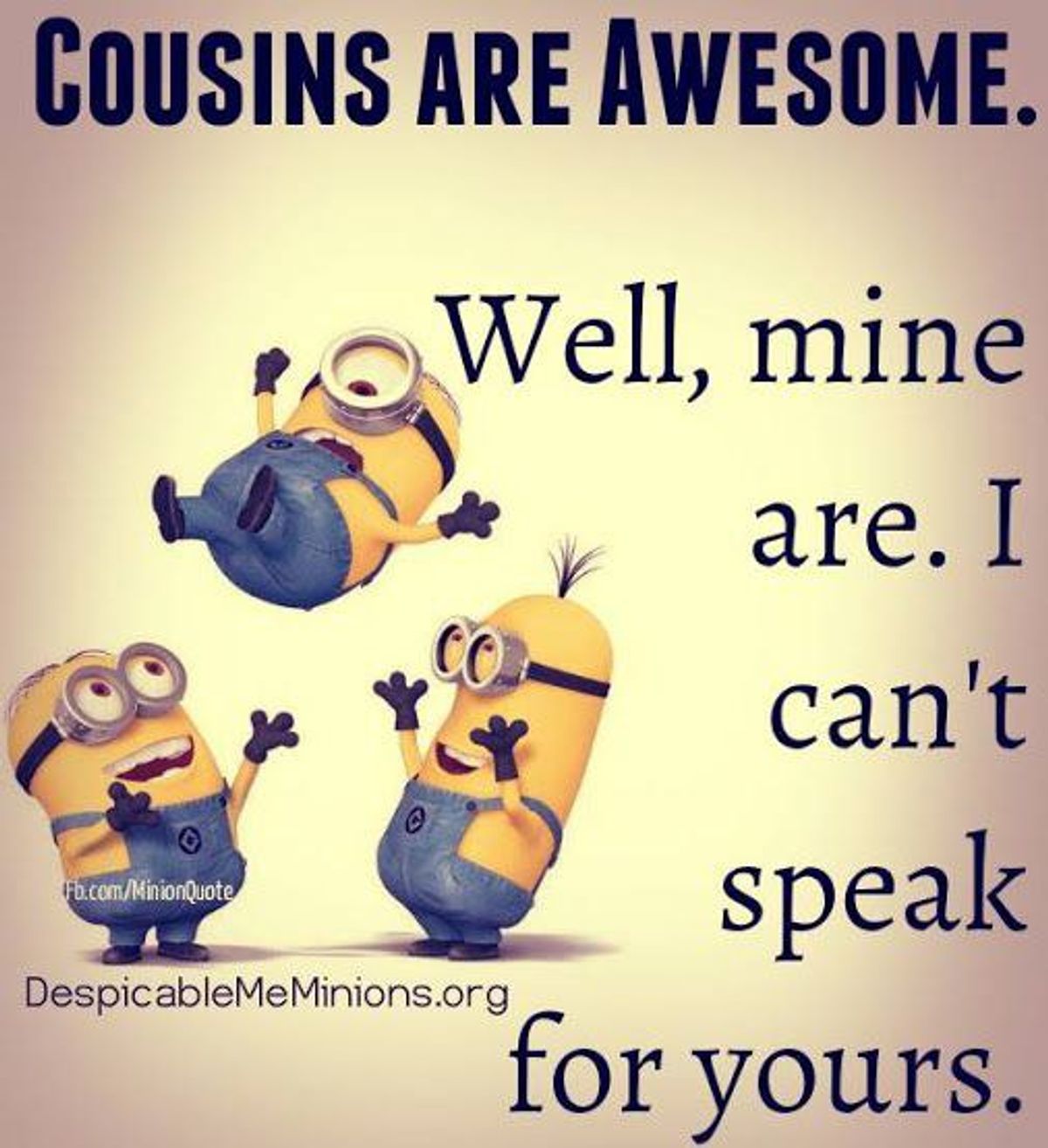 If you come from a large family like me, you probably had more cousins that you could count. And there is always that one cousin you only see on especial occasions or even that other cousin who you guys are always fighting but deep down you guys love each other. And for missing my cousins so much I realized that I had different types of cousins to whom I have different connections with, and thru that connection I listed six types of cousins we all have. But then you ask: Claudia, how reliable is this? And my answer is: it isn’t. nah I am just kidding. It is very reliable, I have been conducting an experiment for 20 years with over 50 subjects and trust me it was really hard to conduct these trials. And I am pretty sure you will relate with my “researches”. Anyways, with no further ado here are my results:

1. The far, far away cousin, but cousin.

This is the cousin you probably saw in some sort of gathering at your family’s house and your parents introduced you as “cousin” maybe because you guys are actually cousins, or probably you have no idea how you are related so you just call them cousin, so you won’t have an headache trying to figure it out. Yeah, what's up Cousin, how are we related again? Oh my mom is the niece of your grandfather’s aunt’s sister”. See??? Cousins. And you will probably see him/her till next year’s birthday party, but you guys are cousins.

So this is the cousin that everyone loves and your parents sees her/him as a beautiful saint who is very polite, kind, always do the right thing and seriously in everybody’s eyes he/she is perfect. And then your parents use them as an object of comparison “why aren’t you like this cousin” “see she helps with the dishes while she is in our house, why aren't you like her Claudia”. But deep down you know she is just putting a very convincing act and you know how she is when aunt Betty and uncle John are not around. But hey, she is an angel. Ask everybody in the family.

(I didn’t put a meme for this cousin because this cousin does not deserve it, seriously do you know how many times my mom looked at me for not washing the dishes when my “cousin” was helping in the kitchen. I wash the dishes everyday woman)

And this my dears, is the cousin who is the star of the family related to schools stuff. This cousin always aced his/her exams, have won all the academic awards, speaks more than 3 languages, play instruments and I am pretty sure your parents annoys the hell out of you every day telling you all about his/her annoying overachieving goals. And this cousin of yours is probably studying in some fancy college and is pursuing a medical or law degree or one of those complicated-words degree, like cardiology, forensic anthropology or something. And this cousin can perhaps calculate force times distance times the co-efficient of friction to determine how fast a hairpin turn in a Prius without blinking, (Ok if your cousin does that he is probably the next Spencer Reid). Bottom line, this is the cousin you should be friends with if you want to pass that chemistry exam. Just don’t try to talk to them while they’re reading a book, they get really annoyed if you do that.

This is the cousin that you are kinda intimidated by, not because they seem violent, but because of the way the act. This cousin is weird, that’s it. They just move, talk and breath weird, they are always in their corner doing nothing but stare at you or the ceiling. They are not really social and most of the times that you try to open a conversation you are just asking to get killed by the silence cause the cousin hates people or talk. And you are pretty sure he/she is only there because he was forced to be social. The only solution is to pray so that the cousin is just passing thru an awkward stage and that it will be temporary.

This is your brother-from-another-mother cousin, you guys are so alike that is scary, so alike that if your own parents mistaken you too, imagine your poor grandmother. You too are best friends and are always together, and when one gets in trouble the cousin obviously will be next in line. Let me tell you something about this cousin, he/she is also the one that you bonded over hating the same aunt that lives with her cat and is always asking you when you will bring a boy/girl home. That’s the cousin. The cousin that is sitting next to you waiting for the gathering to be over. This is the cousin you would rather be lost in a desert with because this cousin is your long lost twin.

Ok, this cousin is the one that makes you wish you were in your room staring at the wall instead of being at the family’s gathering. (well, him and that aunt that is more interested in your love life than you are). This cousin is probably half your age and you always end up “taking care" of him/her, and he is so annoying that he can’t stop talking, he asks you the same question every flipping time and even if you answer he/she has the “but why not” card. And you know you are taking care of that cousin because the grown-ups are probably in the living room getting drunk and talking about how to roast a nice turkey. How to get rid of them? That’s the thing, you can’t. Just pray for them to grow up fast so they won’t be that annoying forever and for them not to have any type of social media otherwise your news feed will be full of your "lovely" cousin's comments.

No matter how much you love and hate your cousin, there will be a moment that you will miss them like hell (trust me, my researches proved that). And if you are like “But Claudia I don’t have that cousin” newsflash, that cousin is probably you. Anyways, love your cousins because they are awesome, when they need something from you, and enjoy your lil cousin because he is going to grow up and you will miss when he was a saint and you though he was the worst thing ever. Just try not to kill them, even if you have 50 cousins, people somehow will notice they are gone.

The girl from the unknown island.