Teen Movies Ruined Boys For Me 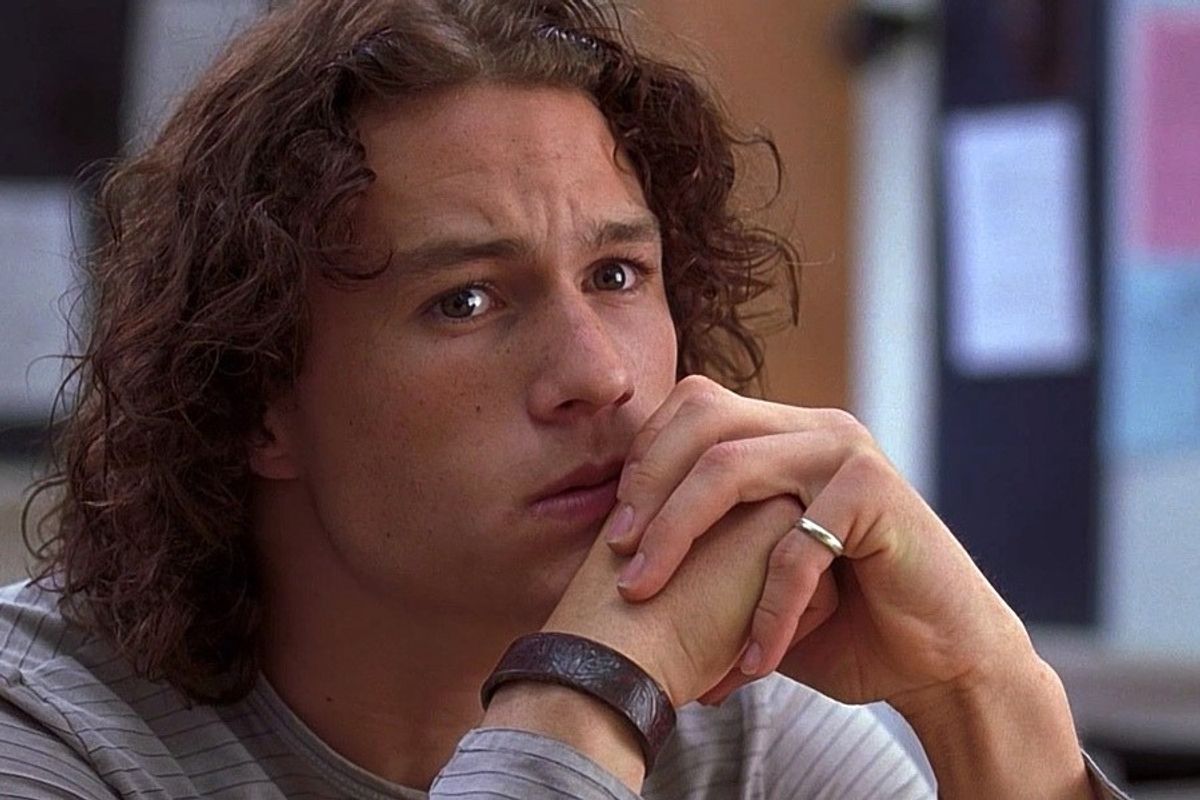 There he is, alone, with his shaggy hair and his brooding eyes deep in some book I've never heard of. I've only ever seen him drinking coffee and smoking cigarettes. He's the same guy that everyone tells me to steer clear from. My parents would drop dead if they ever found out how much I actually think about this guy. There is a ridiculous amount of reasons why I shouldn't like him, but there is also a sliver of hope that maybe, just maybe, it's all a facade. Maybe he's this really amazing, caring guy who's lost and needs someone to help him find his true potential. Maybe?

Where does this hope come from? No further than the number of books and movies I grew up around that told stories of bad-boy type characters having a radical change of heart because of his relationship to some plain-Jane type character they wouldn't look at twice in the beginning of the narrative. Whether you like this genre or not, I'm positive that from just reading that basic description, you thought of a couple books and movies you've come across.

It's not as though this genre is anything new. I mean, think of Charlotte Bronte's "Wuthering Heights." Heathcliff is the baddest boy of the 1800s! Now that I think of it, Heathcliff was actually pretty terrible throughout the course of the novel. He was only a decent human being when it came to Catherine Earnshaw, who was pretty terrible herself. Although these were the days people would gather in the town square and watch public hangings the same way we watch "America's Got Talent" nowadays. Maybe it's this same savage voyeurism passed down from generation to generation that makes danger in the form of a bad boy exciting?

Clearly, the casting director for this 2009 adaptation of "Wuthering Heights" ignored a couple major parts of Heathcliff's physical traits as described by Charlotte Bronte, but I do love me some Tom Hardy.

In my 19 years of liking boys, I have come to the conclusion that the same stories that glorify the bad boy are the very stories that have ruined boys, dating and relationships all in one fell swoop. OK, maybe not ruined, but at least complicated. For one thing, I have found myself tolerating the misbehaviors and mistreatments from the boys I've dated in the past, hoping that maybe if I stuck it out, he would change. I mean if Jamie Sullivan can get Landon Carter to really turn his act around by just by giving him a chance in "A Walk to Remember," then so can I, right? Wrong, because people don't just magically change after you sing a song. Or at least not in my experience.

I suppose it's important to explore why these bad boys are so darn attractive. I like to think a large part of it has to do with the danger element. Being that these are boys my parents told me to avoid, liking them is a sign of rebellion, and who doesn't enjoy a little rebellion, am I right? I think another part has to do with the perceived potential for change. It's this idea that the girl thinks she is some kind of Girl Almighty who can make change happen at her will, or even be a person worth changing for.

All of this is extremely problematic. I've come to find that people don't just change when you want them to. Even if they do change, one, they willed that change and two, there's always the risk of relapsing back into their old ways. We're also forgetting a key element from a good majority of the stories that parade around this bad boy trope: The character portrayed as the bad boy is usually one who is misunderstood from the start, propelled into a lifestyle he has come to adapt to, but never really felt he belonged to.

Take Duke from "She's the Man," take Patrick Verona from "10 Things I Hate About You," take Danny Zuko from "Grease," take Tyler Gage from "Step Up," take Zach Siler from "She's All That," take (my personal favorite) Warren Peace from "Sky High," take Sebastian Velmont from "Cruel Intentions," take Austin from "A Cinderella Story," heck, even Edward Cullen from "Twilight."

You get where I'm going with this.

Also, it's just a coincidence three of the six movies I listed were from the same year. In all of these films, sure the bad boy turns good, but only because the female counterpart gives him the courage and confidence to break his mold and be himself. More importantly, these are all fictional stories.

It's wrong of me to impose my preconceived notions about some boy just because of some movie I watched when I was 13. Who am I to try and change anyone, or even assume that they need or want to be changed? For one thing, I need to get off my high horse and go for human beings I feel comfortable with. Seek honest relationships built upon mutual trust and understanding, ya feel? I need to stop looking at people as challenges or conquests and start seeing them for who they really are. Maybe I'll stay away from dating bad boys, but my oh my, are they easy on the eyes.