If You Love These Taylor Swift Songs, You Have 'Track 5 Syndrome'

The fifth song on Taylor Swift's albums can't help but have a special place in your heart. 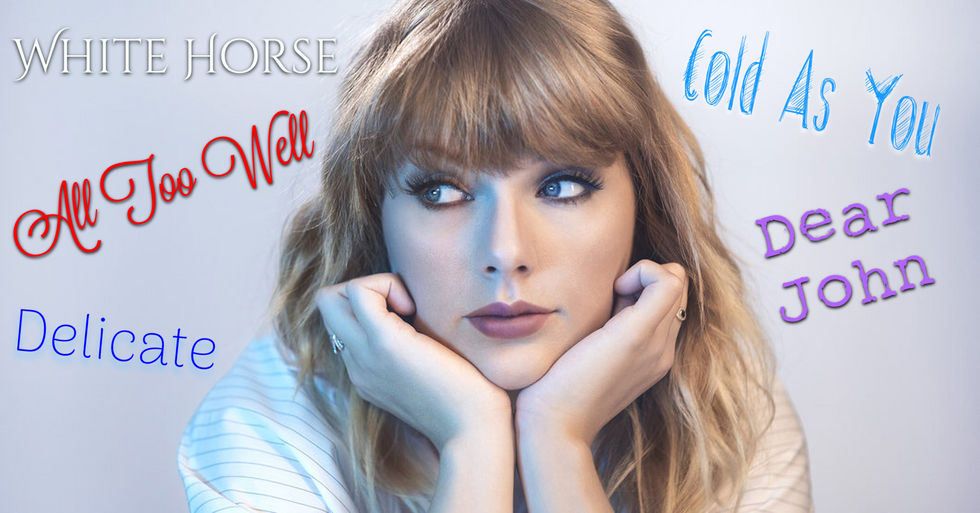 Taylor Swift is well-known for her emotional songs that make us both swoon and cry. While there are plenty of them, the best ones are hiding in plain sight. Look no further than the fifth track on Taylor Swift's albums. Chances are, these are the ones you've connected with the most on an emotional level. If these track fives make you hit the repeat button when you're feeling down, then you probably have Track 5 Syndrome.

From Taylor Swift's debut, self-titled album comes this relatable tear-jerker about a girl who likes a guy who doesn't treat her right.

"Now that I'm sitting here thinking it through, I've never been anywhere cold as you."

My response to that line was always, "And I've been to Alaska, so that's saying something!"

If you've ever fallen for a jerk for some unexplainable reason, this song really hits hard. You don't want to like him, but for some reason, you can't help yourself. To him, you're a mess of a dreamer with the nerve to adore him.

Also, this song may have taught you a new word: condescending.

This song is from Fearless and has a fairytale theme. If you've seen the music video, which is even more emotional than the song, you'd know that it's about her being cheated on. Even if you've never been cheated on, you can still relate to liking someone who has hurt you and made you second-guess love.

"Now it's too late for you and your white horse to come around."

This guy isn't good enough for a white horse. He probably had to paint it white to trick her. Either way, she doesn't buy it. In the end, he is begging for forgiveness, but she turns him down because she knows she deserves better.

Let that be a valuable lesson to you not to settle.

This song from Speak Now uses the cliche beginning to a love letter to call out a guy named John (Mayer) who has hurt her. It is almost seven minutes long, but it is well worth the listen. Maybe that's why Taylor Swift made it track five; she knew about the theory and wanted this song to be special to her fans.

"Don't you think I was too young to be messed with? The girl in the dress cried the whole way home."

This guy is a player who played her. She ignored people's warnings to stay away from him, and she got hurt.

This song from Red is my all-time favorite Taylor Swift song. I love songs that tell a story, and this one tells one I can relate to. This song was originally ten minutes long until she cut it down to five and a half minutes. She basically threw up all her emotions and then formed them into a beautiful ballad.

"I'm a crumpled up piece of paper lying here 'cause I remember it all, all, all too well."

We all have things we would like to forget, but they're so engraved in our minds and our hearts that we remember them all too well. Sometimes someone hurts you and it impacts you more than you would like to admit.

But you can do what Taylor did and turn that pain into something beautiful.

Of course, 1989 has the fifth track, but it doesn't really fit into the mold. The song is All You Had to Do Was Stay, and it is far from a ballad. Does that mean that Taylor Swift stopped making the fifth track an emotional ballad after Red? No, it doesn't. She just took a break. 1989 was a completely different musical style than what we came to expect from Taylor Swift. That's not to say there weren't any songs that could have made a good track five. If it were up to me, I would have chosen You Are In Love.

"And you understand now why they lost their minds and fought the wars. And why I spent my whole life trying to put it into words."

Taylor Swift returns after a long time with her sixth album and her fifth emotional track five. Delicate is about her liking a guy as more than a friend but being afraid that her reputation will keep them from being together. It's a delicate topic to admit that she likes him and to confess that she's worried he won't like her.

"Is it cool that I said all that? Is it chill that you're in my head? 'Cause I know that it's delicate."

In the Behind The Lyrics for this song on Spotify, Taylor says,

"When the album starts off...it's more like 'Oh, I don't care about what you say about me.' But then it hits this point on track five where it's like...'Oh, maybe this does actually matter a little bit.'"

She used a vocoder in this song, which she says makes it sound "really emotional and really vulnerable, and really kind of like sad but beautiful." That's exactly what a track five should be like!

Also, in the music video for this song, she makes a reference to Track Five Syndrome. When she's dancing in the subway, there's a column behind her with the words "Track Five" written on it.

You should know by now whether you suffer from Track Five Syndrome. I suppose I shouldn't use the word 'suffer' because it's actually a pleasant feeling in a cathartic way. Taylor Swift has given us these emotionally vulnerable ballads to help us understand that our feelings, good or bad, are something we need to embrace. That being said, you should go make a Track Five playlist for the next time you need to let your emotions run wild.