The Study Of Our Universe's Beauty
Odyssey
CurrentlySwoonLifestyleHealth & WellnessStudent LifeContent InspirationEntertainmentPolitics and ActivismSportsAdulting
About usAdvertiseTermsPrivacyDMCAContact us
® 2023 ODYSSEY
Welcome back
Sign in to comment to your favorite stories, participate in your community and interact with your friends
or
LOG IN WITH FACEBOOK
No account? Create one
Start writing a post
Student Life

The Study Of Our Universe's Beauty

An exploration into the relationship of science and art 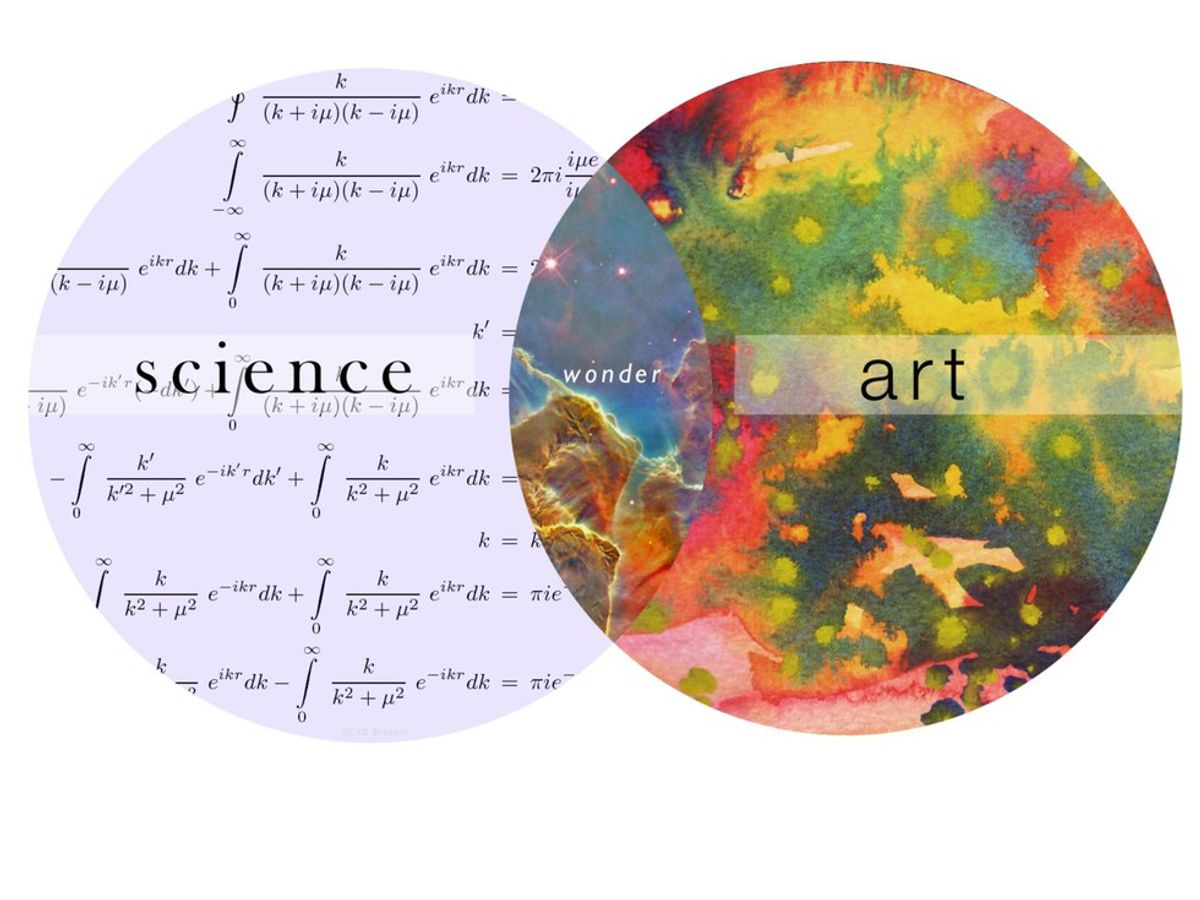 Over the past few weeks, I have utilized this platform to explore science education beyond our traditional view of classrooms, lectures, and lab reports. In my final piece of this series for the summer, I will be examining the relationship between science and art. In looking at informal science education, both in the initial exposure of pre-kindergarten kids and lifetime learning experiences of visiting science museums, one of the most important aspects is creating inspiration. Informal science education focuses on fostering a love of learning, having people learn a little bit and get excited to learn more. It helps people, whether it be little four year olds or fully grown adults, look at the world in different ways. Art ties naturally into this ambition. A piece of art expresses a message. The artist was inspired by something, had an idea they wanted to convey, or the message was developed along the way between artist creation and audience interaction. But when interacting with a piece of art, the participant gets a glimpse at this message. A good piece of art, whether it be visual arts, theater, music, or literature, will keep its audience engage. They will try to observe its many facets and think about what is happening in the piece and within themselves. It will stick with them, and maybe lead to further exploration into the artist’s work, the time period when the piece was produced, the inspiration behind the work, or even a desire to look at more art. These goals of conveying an idea, keeping people engaged, and inspiring them to go further than simply interacting with a subject matter once, transcend between art and science. And with the innumerable wonders of our universe, both seen and unseen, art and science provide new platforms to explore each other.

While science and art may seem diametrically opposed, there has been a strong relationship between the fields for centuries. The work of Leonardo da Vinci is a famous example. Known for his art works such as the Mona Lisa, da Vinci revolutionized the study of anatomy, allowing for increased realism in his paintings. He also was a brilliant inventor, designing anything from a steam-powered cannon to a helicopter (source: Boston Science Museum). Beyond da Vinci, art and science have had a continuous influence on each other, like the inspiration of Japanese origami in improving designs for medical stents and air bags, and experiments in fluid dynamics leading to modern art pieces by artists such as David Alfaro Siqueiros (source: Scientific American, American Physics Society). As stated by Mae Jemison, the first African American woman in space, “The difference between science and the arts is not that they are different sides of the same coin… or even different parts of the same continuum, but rather, they are manifestations of the same thing. The arts and sciences are avatars of human creativity.” But, with the increased focus on STEM within schools, and decreased funding for arts programs, the distance between study and marriage of both fields is growing steadily.

The rising popularity of the Maker Movement and discussion from changing STEM to STEAM (Science Technology Engineering Art and Math) may change the tide. The Maker Movement, which focuses on building and tinkering from a young age, allows for creativity and exploration. Making something is a more totalitarian, and therefore relatable, way to discuss inventing something, and as stated by Dale Dougherty, the founder of Make magazine, a person’s life is enriched by creating something new or developing a new skill. Influences of the Maker Movement in science education can allow for more hands-on activities, providing the benefits of allowing for increased creative potential and engaging tactile learners. The influence of STEAM and the Maker Movement can be seen in the summer programming at Burlington, Vermont’s ECHO Science Center, Science Loves Art. Science Loves Art is a weekly program running on Wednesdays where a presenter talks about the science behind something beautiful found in our everyday lives and then there are a series of activities available for children to try. This past week focused on sound, going over how sound travels as a longitudinal wave and how the vibration of our ear drum and three tiny bones in our ears allow for us all to hear. This was followed up by interactions where one could hold a tuning fork near their ear, feeling the vibrations and hearing the different tones, a station where kids could play with various musical instruments, and even a place for kids to make their own harmonicas and kazoos. The pleasure in working the Science Loves Art program is the direct connection it highlights between everyday life, beauty, and complicated science. It brings together various fields of science while being fun and giving a greater appreciation for art. With sound, a child gets a glimpse into the worlds of anatomy and physics, while getting beautiful music, and occasional jumbled noise from the mixing playing of toddlers. They also have ongoing exploration of sound and vibration, feeling as well as hearing the noise they make on their exciting, handmade instruments. With the Maker Movement and STEAM, the bridge between science and art can become shorter.

With how science and art stand today, both fields are intimidating to the other. Science is said to be full of complex equations and concepts that imaginative art students cannot grasp, while art is full of passion and emotion that strict science students cannot understand. But the two fields are not so different. They are both filled with ingenuity, experimentation, and a drive to understand and describe the many facets of our universe. Though often unseen, the studies feed off of one another. By breaking down the barriers, the future of science and art can filled with new discoveries and ideas that may only be found with a little different perspective and new creativity.

Is It Better To Know, Or Not To Know?