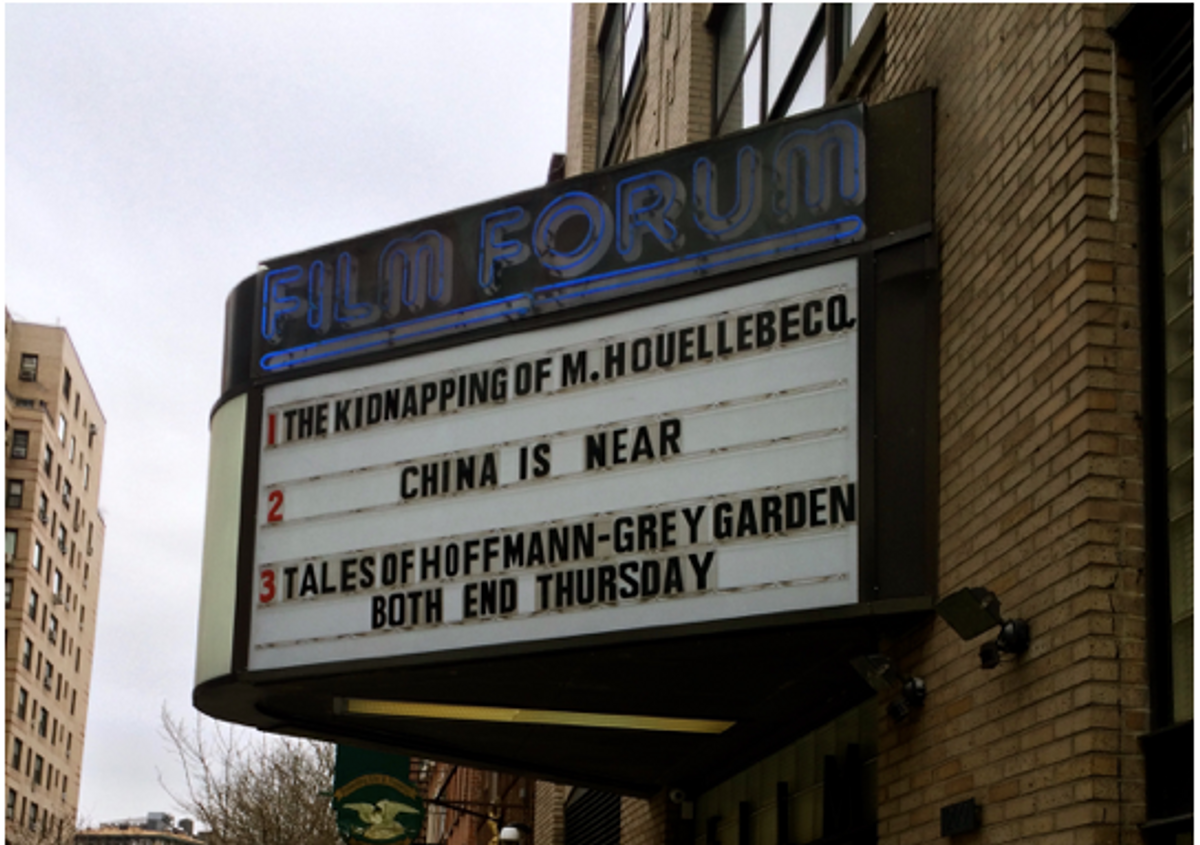 The stark white face of the theater’s marquee practically glows in the harsh sunshine of the summer afternoon. Once inside, one is surrounded by large red columns that erupt, seemingly at random, from the equally red carpet. Promotional film posters adorn the walls. To the casual moviegoer, this is unexplored territory, for there is not a blockbuster in sight. That is the way things are, and have always been, at Film Forum. When it comes to film, age is nothing but a number, and commercialization is turned away at the door.

Film Forum started in 1970 as a single-screen cinema in the Upper West Side with 50 folding chairs “and one 16mm projector the size of a breadbox,” remembers current director, Karen Cooper, who took over the theater in 1972.

“I was not particularly interested in film. My major interests were dance and literature. I met the young man running Film Forum while writing for a third-rate film magazine. He offered me ‘the job’ such as it was. I hated my current job. I have always had an independent streak a mile wide. I accepted," she explained.

Under her leadership, the theater evolved into the three-screen cinema with 489 seats currently located on Houston Street.

Film Forum is also the only nonprofit theater still operating in New York City, and one of only a few in the U.S. Originally functioning under the aegis of a theater company, Film Forum became an independent organization after Cooper became director and applied for autonomous nonprofit status.

While many other nonprofit theaters in New York City have been forced to close over the years, most likely as a result of rising real estate prices, Film Forum has endured. Cooper attributes the theater’s success to “showing only the best films possible, aggressively and creatively seeking out work from sources worldwide, marketing films with professionalism, and maintaining high standards for [its] facility.”

Since its inception, Film Forum has prided itself on being “an alternative screening space for independent films,” according to its website. It's cinematic repertoire also includes experimental works, documentaries, foreign films, and revived classics.

While the range of films showcased by Film Forum is quite similar to that of another NYC independent theater, the Quad, Cooper insists that the similarity is merely superficial.

“Our selection of NYC premieres is the biggest difference between Film Forum and other independents. This is not to say that other cinemas don’t show first-rate indie work. They do. We are just more consistent, more inventive, more innovative than the rest of them, even when we do miss a trick or two," she said.

That is, however, a matter of opinion.

Mike Maggiore, a programmer for Film Forum’s NYC theatrical premieres of American independents and foreign art films since 1994, attributes the theater’s success mainly to its policy of showing unique films that few other theaters would give any attention to.

“We’re trying to champion work that isn’t getting any play in commercial cinemas,” he said, “A vast majority of the films we open theatrically would never play in… even a more commercial art-house cinema.”

“We need to consider other ways of looking at the world than those driven mainly by profits. Foreign films give us, as Americans, some insight in a big, complicated world that more often than not have different values from our own. Documentaries offer a window onto innumerable subjects that cry out for our attention. Frankly, ‘conventional’ anything sounds pretty [darn] boring," Cooper explained.

Film Forum’s intense commitment to presenting its audiences with a wide variety of films is even evident behind the scenes. In its projection booth, Film Forum maintains five different types projectors to play films of varying formats and ages, including one that plays 3D films from the 1950s, a system that requires two 35-millimeter projectors running in perfect synchronization to create an illusion of depth for the audience.

Film Forum classifies itself as an “art-house” cinema, or one “that specializes in films made outside the Hollywood studio system,” according to Cooper. Many cinematic genres can fall under the “art-house” umbrella, including independent films, foreign-art films, foreign and American classics, director retrospectives, and documentaries, all of which are showcased at Film Forum. In addition, the theater also hosts events during which directors and cinematographers introduce their films and answer the audience’s questions.

Choosing what films to show is no easy task.

“We cast a really wide net in terms of what we look at. Even though we only have about 30 slots for premieres every year, we probably look at between five and six hundred films," Maggiore explained.

He and Cooper also attend around eight film festivals around the world per year to look for promising new films premiering off the beaten path.

“I feel that what [Film Forum] has brought to New York is a rich repertory of titles and world cinema… and shows that those films have an audience in the United States," he said.

“I go less often than I should,” he admitted, “[Film Forum] is one of the only cinemas left in New York City showing classic films… and one of the few places that [one] can catch restored film prints. I think it’s a great institution.”

Film Forum’s plan for the future is to continue to showcase its eccentric repertoire of films with the support of a new generation of cinephiles taking shape in its Film Forum Jr. program, where the theater screens kid-friendly movies, such as “Freaky Friday” and “The Goonies” at discounted rates on Sunday mornings.

“Given that there are so many different ways now to spend your entertainment time,” Maggiore said. “The goal is to keep new generations of movie lovers coming to movie theaters… to see classic films on the big screen.”