The story of that one time I stepped on a sea urchin in Greece. 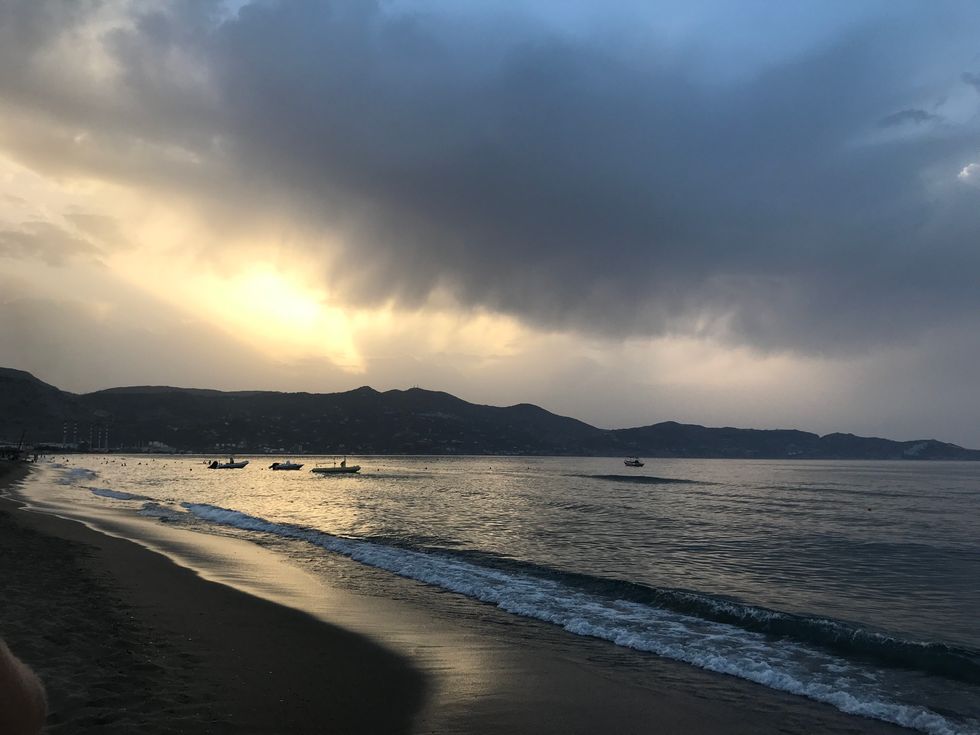 When one embarks on any study abroad program, the two major things you can hope for are to gain new knowledge about the world, and to return home in one piece. Of course you never anticipate anything bad happening, but it's always important to try to expect the unexpected, even though that cliché is an oxymoron itself. Being more than half way through my study abroad program in Greece, the least of my worries was being afraid of the ocean. The water at all of the locations we have been to has been beautiful and clear, sharks aren't a concern, and nothing out of the ordinary could happen to me while I'm here, right?

After cliff jumping in Santorini, spending countless hours on various boats, and putting my obscure injury-prone self into many other situations that injury would have been expected, the thing I have learned to fear from this trip is... *drumroll*... sea urchins.

Staying at an all-inclusive beach resort in Crete for the week, I was absolutely thrilled to finally be able to save some money after dropping endless euros on food during the past two weeks, since we are staying in hotels all over Greece for the duration of the program and can't cook our own meals. These frugal hopes went haywire when I was enjoying a casual swim at Agapi Beach, a beach that apparently is known for its presence of sea urchins; something I was completely unaware of when I got in the water.

Everything was completely fine as a friend and I were enjoying that beautiful water, when my I scraped my heel against a sharp rock. I immediately thought I was bleeding, and of course tried to convince my friend that a shark was going to smell my blood “Nemo" style and come eat me if we didn't get out, even though sharks aren't a real concern near Crete. Realizing I wasn't actually bleeding, I relaxed and went along with my day, because I step on rocks in the ocean all the time, and it's usually no big deal. it wasn't until later in the day that I noticed about seven little black dots under my skin which I assumed were pieces of rock from when I scraped my foot that afternoon.

I barely thought anything of it until I started complaining about the pain to one of my professors, who didn't panic when she saw it, but did ask if I knew what a sea urchin sting looked like. Of course I didn't, because who gets that close to sea urchins, or really even knows what they are? Apparently I am one of the unlucky ones who does, because right after she googled pictures of sea urchin stings, we immediately knew that there was more than harmless gravel in my heel, they were pieces of poisonous sea urchin spines!

After speaking with the hotel staff and being assured that people step on sea urchins all the time there (once again, something I was completely unaware of) so there was no reason to panic or seek immediate medical attention, they gave me a bowl of olive oil and gauze, and told me to wrap my heel in a piece of olive oil-soaked gauze overnight, and that would help the spines come out on their own. But alas, olive oil does not fix everything, and I woke up with my heel looking exactly the same as it did the night before, and was in even more pain than the day before.

After it was clear the olive oil attempt failed, I was taken to a medical center down the road from our hotel, and had the absolute joyous experience of laying on my stomach by myself while doctors who spoke just about enough English to be able to tell me that one of the spines was "very deep" cut and poked into my heel without painkillers for almost two hours. Three doctors and €150 later, I was told I was sea urchin spine free, and will be leaving Greece with new knowledge about Greek culture, their medical system, and a newfound fear of the ocean.