Why 'Slut' Is A Sexist Slur

Why 'Slut' Is A Sexist Slur

When you call her a slut, you imply more than her sexuality. 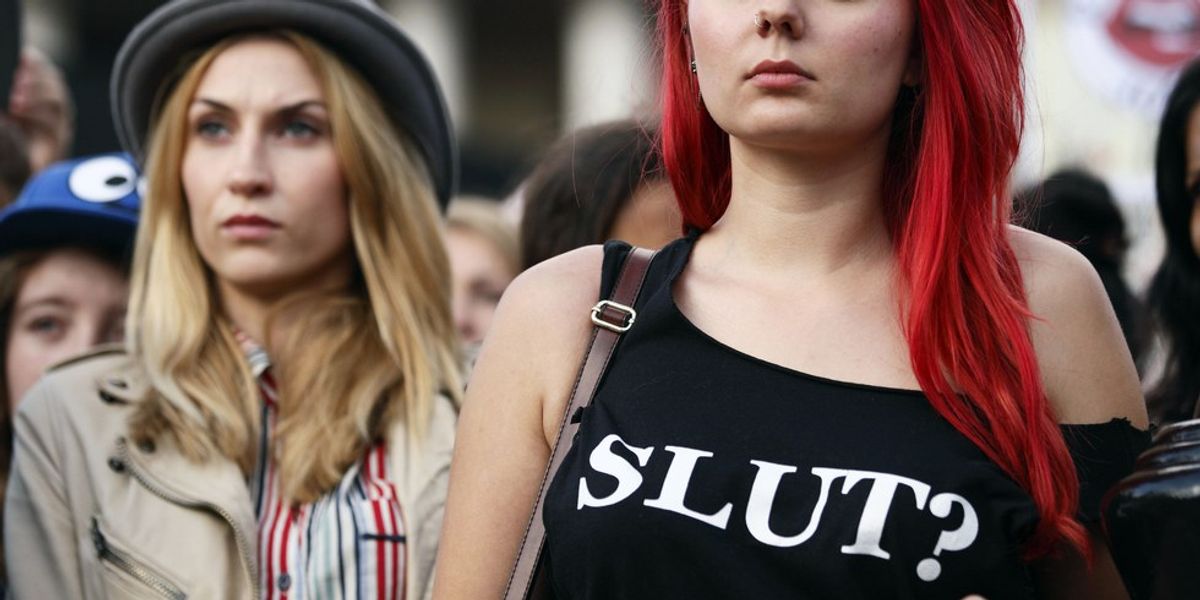 The word "slut" has been used for generations regarding women. It has its sisters, like "whore," "trollop" and "harlot," which are not used as much anymore, but the implication of the word is definitively negative. I've been called it, most women I know have. It's reserved only for women, and it is meant to shame and degrade (hence the term "slut-shame"). There are many reasons why it's sexist and should be rethought, here are a few.

1. It is used for seemingly any reason

Although the common denominator is the gender of the recipient, what prompts this word varies. Women are called "sluts" for wearing too little clothing, for being too "easy" to have sex with, for declining sex, for dancing in a provocative way, for insinuating they enjoy sex, for wearing too much makeup, for disagreeing (I've been called a "feminist slut" for arguing with someone's opinion), for being too flirtatious. The list goes on. It's clear that this word can and will be applied any time to just hurt a woman and shame them. To put them down. It has no solid meaning in sexual behavior, despite what any Urban Dictionary or Google search defines it as. The connotation is so vast, and the usage so arbitrary, that it's simply become a targeted phrase for the degradation of women.

2. Male equivalents are not equal

When a male is called a "manwhore" or "manslut," it is first modified to clarify it's not a woman. Just so it's reasserted that this a man, so it's different. It also has different usage. Sometimes it can even come with an amount of admiration and respect. Calling a man these things rarely ever pertains to clothing or other non-sexual behavior. It almost always refers directly to sexual behavior, sexual behavior that is negative, as in cheating or playing around with emotions, or some moral wrong associated with sexual intercourse, not simply the amount of sexual intercourse. "Slut" is a completely different term.

Because it can be used for both someone who denies sex and for someone who accepts "too much" sex, this word becomes a power play of judgement on women's sexuality. The idea is that one thinks a woman is having "too much" sex, whether that is true or not, and implies that a woman should be having only a certain amount of sex. Women cannot ever reach this expectation, as their sexuality and the amount and desire for sex has been shamed and publicly judged and examined for generations. Bring in the other uses of the word that are not directly relevant to sexual behavior (clothing, makeup, flirting) and it starts to really seem as if "slut" is just a judgement thrown at a woman that someone doesn't believe is behaving the way a woman should. As if there's a standard we must constantly meet.

4. Spreads and normalizes the term

Every time this word is used genuinely to put down a woman, it perpetuates that it is an OK word to use and that judgement on women's behavior and the male gaze are acceptable. Women use it toward other women (sometimes jokingly and in a positive way, trying to reclaim the term, but many times out of actual scorn) because they have been taught to adhere to certain standards set by a patriarchal society and they therefore police each other. That is one of the most concerning effects of systems of oppression in women and in minorities. Sexism and racism alike contribute to increased tension within those communities and heightened animosity and judgement of those of the same demographic not fitting with society.

5. It's none of your business

I challenge you to stop and think every time you seriously intend to express that any woman, especially one you don't know, is a "slut." Why do you think so? Is it anything she did to you? Has she wronged you personally somehow? And, is it any of your business what she does or does not do in bed? What she wears? How she does her makeup? How she acts at a bar? Is it?

Because I don't think it is.