An exploration of my love for New York City. 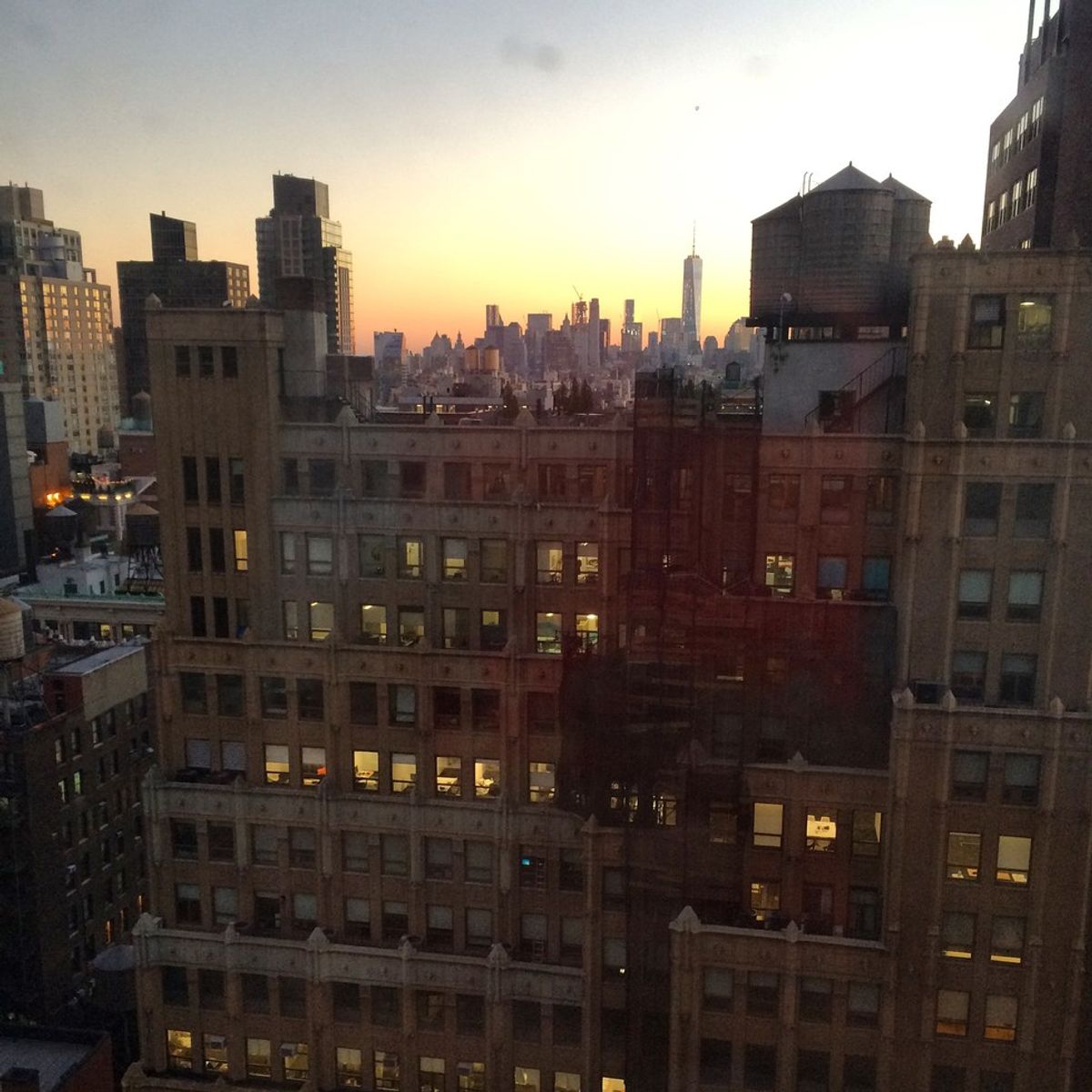 A sigh escaped my lips as I entered the Staten Island Ferry terminal. The artificially cool air inside the large glass and steel building was a welcome relief. The heat that early Saturday afternoon was heavy, and pressed the city around me into my skin. As I rode the escalator up to the waiting area, I watched as those moments evaporated into the past. The atmosphere of Little Italy infected with color. Mott street in Chinatown choked with people admiring classic cars. The zoo-like gaze of tourists watching people sleep in the crannies of financial institutions on Wall street. All the while, I struggled to hear my own thoughts above the Manhattan din.

As a crowd of people formed near the boarding area, I melted into them and became lost in a swirl of languages that were not my own. Once we boarded the shockingly orange ferry, commuters fell into the rows of faded green and blue plastic seats. Tourists poised with cameras and wide-eyed children clung to the railing. Notebook in hand, I joined them.

The jarring squeak of the ferry rubbing against the dock filled the air. Flecks of blue and white paint flurried from the railing as I drummed away with impatient fingers. Five blasts from the boat’s foghorn eventually signaled our departure.

From my perch, I watched as the water, more gray in color than blue, rolled delicately away from the hull, only to disappear once again into the depths. Seagulls high overhead were merely more than shadows framed in white. Over-sized barges and a sole schooner ripped through the harbor. A pair of jet skis played in our wake. In the distance was the Verrazano-Narrows Bridge. Beyond it, the rest of the world.

In the moments when my vision wasn’t obscured by tendrils of my blond hair possessed by the wind, I watched Manhattan grow hazy. From the ferry, the city seemed eerily silent. No jackhammers. No sirens. No horns. No drone of millions of conversations. Just miles of lifeless buildings marching towards the water.

I rarely meet silent Manhattan. It’s a Manhattan seen from airplane windows, and in old photos growing yellow in the attic. It’s the Manhattan that exists somewhere between sleep and consciousness. Silent Manhattan is a place that barely exists.

I’m guilty of saying I didn’t know why I loved this place. Maybe my brief encounters with this city’s hidden silence is part of the answer. It shouldn’t be there, yet, it makes itself known just the same. The sticky, salty air did nothing but drive this notion deeper into my skin.

More often than I’d like to admit, the noise becomes too much. It suffocates my thoughts, rattles my bones, and makes me search for the love all over again.

Yet, on the ferry, watching the uneven horizon fade into the haze, I saw Manhattan as I did for the first time; a mythical place on the cusp of quiet potential. A place more imagined than real. Then, I felt the familiar tug in my heart and I knew that all was well.

Sometimes, to know why you love this city, you have to leave it behind.