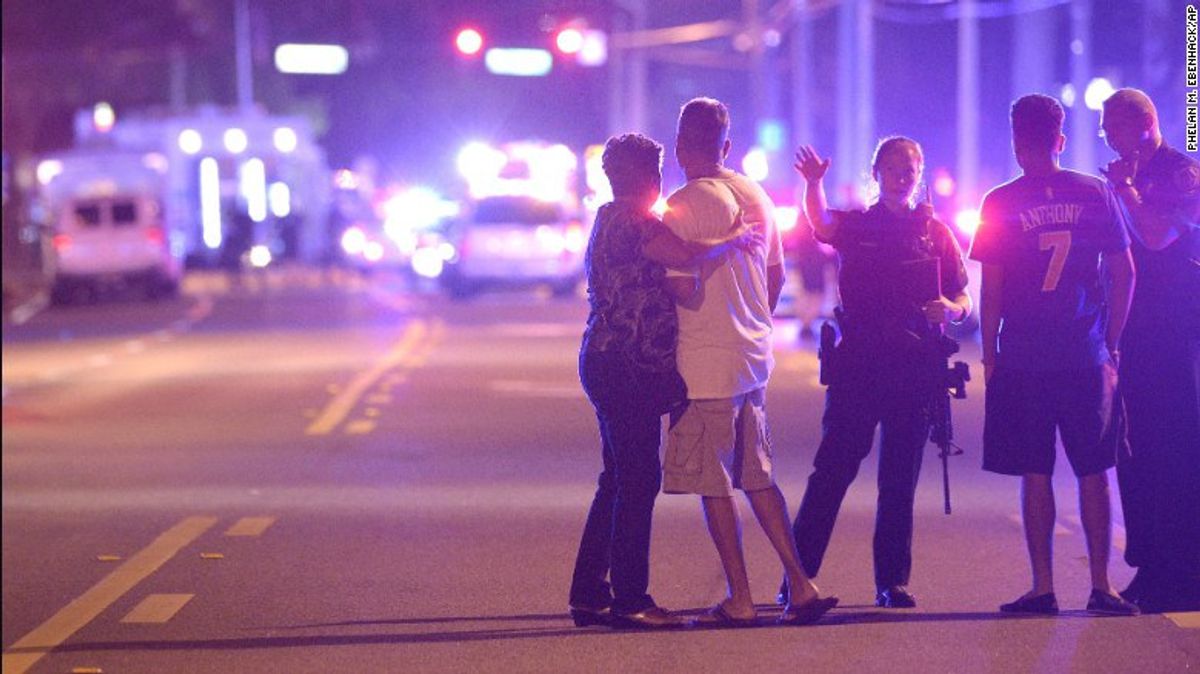 It is with great sadness that we learned of the two shootings in Orlando, Florida, over the weekend. Both a result of people who thought they had a right to take away other persons' lives because of hate. There is a huge problem with that sense of entitlement to someone else's right to live, and the lenient access to means to put those beliefs into effect.

Christina Grimmie, a talented woman of only 22 years was shot after her concert by a man armed with two guns. She was an incredible singer with a good heart and so much potential. She started her career on YouTube, won third place on the show "The Voice," and released an EP "With Love." Her brother tackled the shooter, but she died from her injuries in an Orlando Hospital a couple hours after the shooting. The shooter, Kevin James Loibl, 27, died at the scene.

Early Sunday morning around at two am at a gay nightclub in Orlando, Omar Mateen went in with an assault-type weapon, a handgun, and a possible explosive device with the intent to kill as many people there as he could, all because of hate and intolerance. He was organized and well-planned, it became a hostage situation, and it resulted in the deaths of 49 people and injured 53, the worst terror attack in the United States since 9/11 and the worst mass shooting in U.S. history.

According to a NBC news phone call with the shooter's father, Mateen's motive was a hate crime against the patrons of the gay bar, probably incited by his hatred and homophobia and initial reports believe he was working alone. It is Gay Pride month and the nightclub was having a Latin Night, and Pulse Nightclub is one of the most popular gay clubs in Orlando. There were about 320 people in the venue when Mateen started shooting. Orlando police responded and intervened after a three-hour standoff and crashed into the club with an armored vehicle to kill the shooter.

What has the world come to, though, when one person's hate can ruin and destroy 49 other peoples' lives forever? When one person has so much hate that they believe the best course of action is to go and mass murder a group of people who are just being themselves? When one person has access to the guns and weapons that have the potential to kill many more people?

This calls into question the effectiveness of gun laws and the cost to our society of the second amendment right to bear arms. When those arms have the capacity to kill innocent people, the risk of that access is hardly worth it anymore. More stringent background checks and gun buying procedures would help to reduce the possibility of guns getting into the wrong hands. When guns are bought with the intent to harm and kill people and not for self-protection, that's where the problems start to arise.

The people and families who have been touched by this act of terrorism will suffer the consequences of this man's actions for the rest of their lives. 49 people have died. 53 more people were injured and taken to a hospital. All of the families and friends of the people who have died have lost a loved one and will go through months and years of mourning. The 53 people who were injured will live with PTSD and that weight for the rest of their lives. It will affect them and the people who know and love them.

There is so much that could have been done to prevent this, but it wasn't, and now we should focus on how we can help and comfort and support those who have been affected. One way is to start learning how we can work to enact change for a better and more safer community for everyone. Donating blood, advocating for compassion and understanding and open mindedness for both the LGBT and Muslim community, and looking at gun laws are the best ways we can help.

Restrictions that the majority of Americans are in favor of are are background checks, a ban on assault weapons, and a federal database to track guns. These are all reasonable policies to ensure the safety of the American populace while still allowing guns to be in the hands of responsible users. Encouraging local and national lawmakers with our votes and by writing to them to support more specific and reasonable laws and gun control policies can save lives. I stand in solidarity with the Orlando LGBT+ community and their families as they learn the names of the victims and start the process of mourning for our fellow Americans.