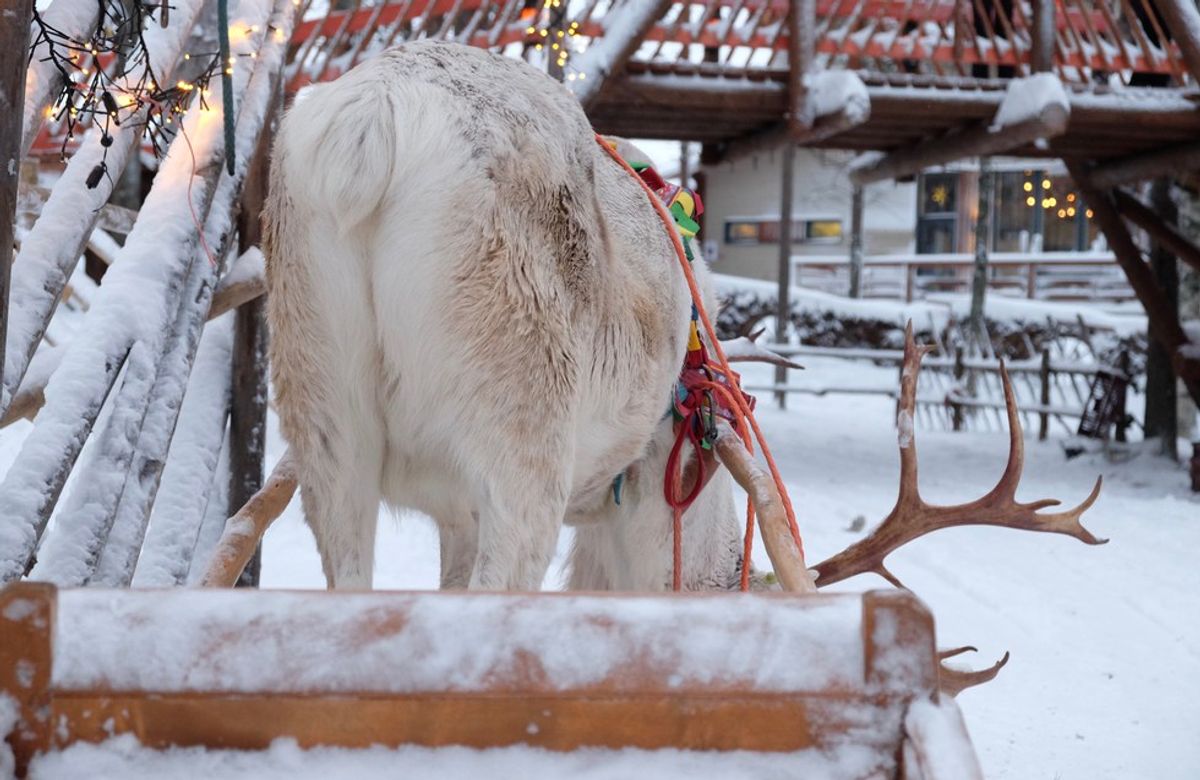 Not a lot happens in Rovaniemi, a little city in northern Finland and popular landing spot for Lapland vacationers. The city gets most of it’s revenue from tourists seeking a winter wonderland, boasting attractions such as a ski lodge, a small arctic zoo, and the ever-popular Santa Claus Village.

Most people who come to Rovaniemi seek a unique adventure. Tour companies offer safaris to go Northern Lights hunting, snowshoe hiking through the constant fluff of snow that coat the mountains, cross country skiing, and perhaps the must-see on everybody’s list: dog and reindeer sledding.

Our first day there, we enlisted the expertise of Bearhill Husky and took a 90 minute excursion through the wilderness with a team of huskies. Even before we had started the dogs were howling with excitement, tugging at the harnesses, they couldn’t wait to start running.

Talking to our guide, we found that they were in the process of building a fence to cover the perimeter of the acre of land owned by the kennel. This would allow the dogs to run around freely in the summer when they couldn’t get their exercise from mushing. All in all, the guides seemed to know what they were doing with the dogs, knew each of the hundred by name and personality, and seemed to care for their work and their animals.

After having a successful dog-sledding experience, we decided to see the reindeer sleighs the next day while we were at the Santa Claus Village. Throughout it, however, I couldn’t help but feel sick to my stomach.

With the huskies, we kept having to brake because the dogs were so excited and going too fast. The reindeer showed none of the excitement of the dogs. Our guide had keep pushing the reindeer onwards using his reins. Moreover, the skin on my reindeer had started to redden, as if raw and chafed from pulling the sleigh.

Its antlers had also broken off, but no one seemed to do anything about it. Now, I know reindeers shed their antlers every year, but I have to wonder about the state of these animals. This looked like a wound left untreated.

And then, as if adding insult to injury, they had left blankets made of reindeer fur for guests to wrap themselves in while in the sleigh.

The Lappish have a long history with reindeers, many owning reindeer farms inherited from their ancestors. I don’t doubt that there are many happy reindeers in Rovaniemi, but you’d have to show me a little bit more evidence before I’m convinced that these ones were.

I left feeling guilty for contributing to a system that perpetuated this treatment of animals. From the moment you entered the Santa Claus village, you can tell it's a total tourist trap. We should have known that this would mean their main goal is tourism and profit, and probably didn't care much for the quality of our interaction with the animals.

At the same time, I wasn't sure. Lots of people had come back from her with great experiences, none of the travel sites like TripAdvisor listed any complaints about the reindeer. After all, I was only a tourist, what did I know about raising reindeer? Or perhaps the entire industry was cruel and the happy huskies were merely a facade too.

The truth is I still don't know. But even though I can only say this with the narrow viewpoint of a tourist (so take it with a grain of salt), I know what I saw was a team of dogs much happier than the reindeer pulling sleighs, and I am reminded of a quote by Anna Lappé:

Every time you spend money, you're casting a vote for the kind of world you want.

Whether we benefit from it or not, there's no denying that in our consumerist world, people follow the money. As travelers as well as consumers, it's our job to be careful of where and how we spend that money, and that we are contributing to businesses and organizations that are using their resources responsibly.

Caitlin Marie Grimes
University of South Florida
6617
Beyond The States