7 Things You Learn Your First Week At Rutgers University
Odyssey

On Monday, I faced my biggest RU Screw yet when my language placement test was scheduled for the same date and time as the beginning of the Involvement Fair. 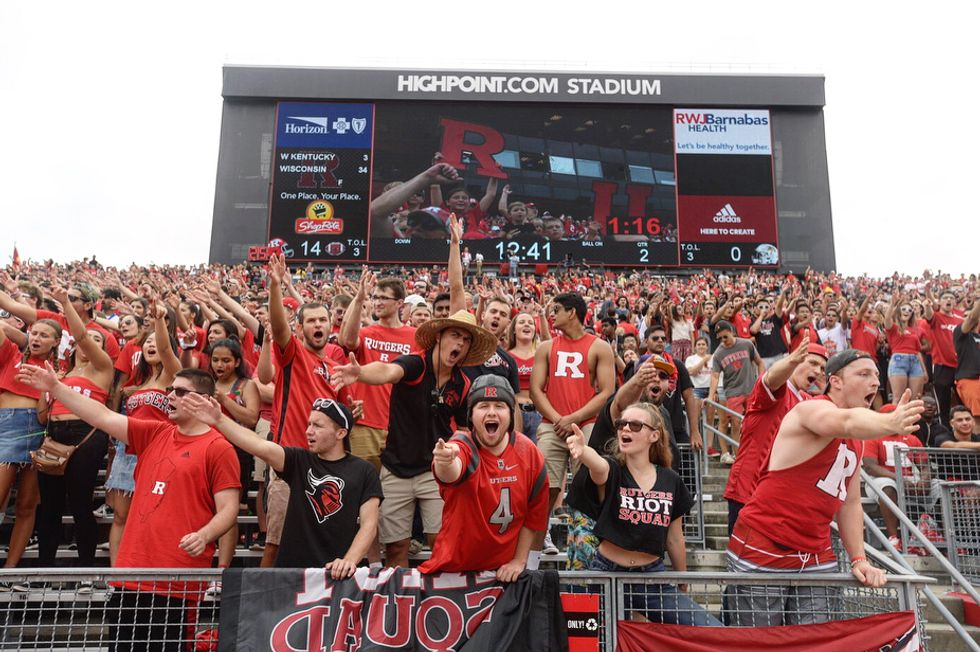 I went into Rutgers with lots of questions. Every single day of my first week, I learned the answer to one of those questions.

1. How do you make friends?

The Thursday I moved into my dorm, there was a knock on our door. A couple friends of mine from orientation had come by to say hello. I had just met my roommate, a South Korean international student who had moved in early, and her side of the dorm was beautifully minimalistic. Mine looked like a Target truck had emptied its cargo onto the floor. I tried to hide the mess but was made fun of for it anyway.

Because of this, several freshmen polling passerby about intramural soccer found the hallway they were walking down blocked, so they decided to stay and chat. They, continually, blocked the way for more people just trying to make it on their way, who gave up and stood outside our door as well.

How do you make friends? Obstruct people who try to get around you until they give up and add you on Snapchat.

2. Is making such a big change scary?

On Friday, we realized that the school is huge. During convocation, freshmen filled the entire Rutgers Athletic Center, and we realized how many people existed outside our dorm. There were even greater crowds at the ensuing Carnival, though we didn't get to interact with them much because we stood in line for cotton candy for half an hour, out of interest at first, and then for the sake of our pride.

Later, with no one to stop us, we wandered around College Ave for things to do, well into the night. Those things ended up being shouted various things at by passing-by upperclassmen, the best of which was, "Hey, freshmen! This school is ass. Transfer!"

My roommate and I returned to our dorm, and, with friends, drank Caprisun and played cards well into the night, collapsing around 4:30 a.m.

Is making such a big change scary? The only scary part is that, now, you're meant to be responsible enough to stop yourself from being an idiot.

3. What about my old friends?

Making new friends can be fun, even if it is a little stressful. For example, explaining what was going on during the Rutgers vs. Texas State football game on Saturday to a South Korean international student was difficult, considering how little I actually know about football.

Luckily, when I had a lot on my mind, I was able to act like my life was an episode of "Who Wants To Be A Millionaire?" In an attempt to try to ignore the reality of how much I'm paying per semester, I phoned a friend.

The problem is that my friends from high school have their own lives too, so it took a while before I gave her a dorm tour and we talked about our last few days,

What about your old friends? They'll be there for you any time you need them, but you might need to schedule that time of need for five in the morning.

4. Will this experience be what I think it will?

On Sunday, I woke up in time for breakfast, when my roommate informed me that we were actually going to Target instead. A friend of ours had a car, and he needed a very important essential he had forgotten to buy: Post-It notes, to make a message on his window.

We restocked on snacks and Caprisun at Target, and we resolved to introduce my roommate to IHOP after. That resolve crumbled almost immediately when we saw the twenty minute wait time. We went to a diner instead and had a mediocre but incredibly filling brunch.

I intended to go to Throwdown with my roommate, but she had to go to church, so I met up with some other friends to watch the events from the sidelines. We didn't exactly intend to lose, but we definitely weren't expecting our dorm to win both Throwdown sessions.

Will this experience be what I think it will? Almost never, and that's okay (unless you're the poor kid who thought his phone would last more than four days at Rutgers without smashing it on the ground).

5. What do you do when times get tough?

On Monday, I faced my biggest RU Screw yet when my language placement test was scheduled for the same date and time as the beginning of the Involvement Fair. I took the test anyway, knowing fully well that I would bomb it, and received a text from my roommate reminding me to bring water out when I met her and some others at the Fair.

I don't remember the number of clubs I signed up for that day, nor do I know if I died of heatstroke. All I do know is that my friends saved a lot of the things handed out by club recruiters for me.

Classes started on Tuesday, and nearly everyone went to sleep before midnight for the first time since move-in. We'd all been exhausted from staying up late to fret over our schedules and from waking up early to switch into open sections as soon as possible.

Even though many of us didn't have quite so stressful days, there was an obvious sense of tiredness all around. Much of the time after class was spent sitting in various lounges and trying to keep up a conversation.

Am I the only one feeling this way? Actually, maybe, since I'm up at 1:40 a.m. typing this article.

7. Will I ever figure everything out?

On Wednesday, my roommate and I used teamwork to figure out which bus she should take to her morning class. We congratulated ourselves immensely.

I don't run into the people I saw the days before school that often, and I saw the lounge we usually frequent empty for the first time ever. However, with everything settling down, we were able to start comparing which campus who would be on at any given point. We've made plans in the evenings, and the weekend, when people are free.

Will I ever figure this out? Hopefully, but considering the line at advising every time I walk by, it might take a little bit.