Why Russell Westbrook Is Oklahoma's Most Valuable Player
Odyssey

Why Russell Westbrook Is Oklahoma's Most Valuable Player 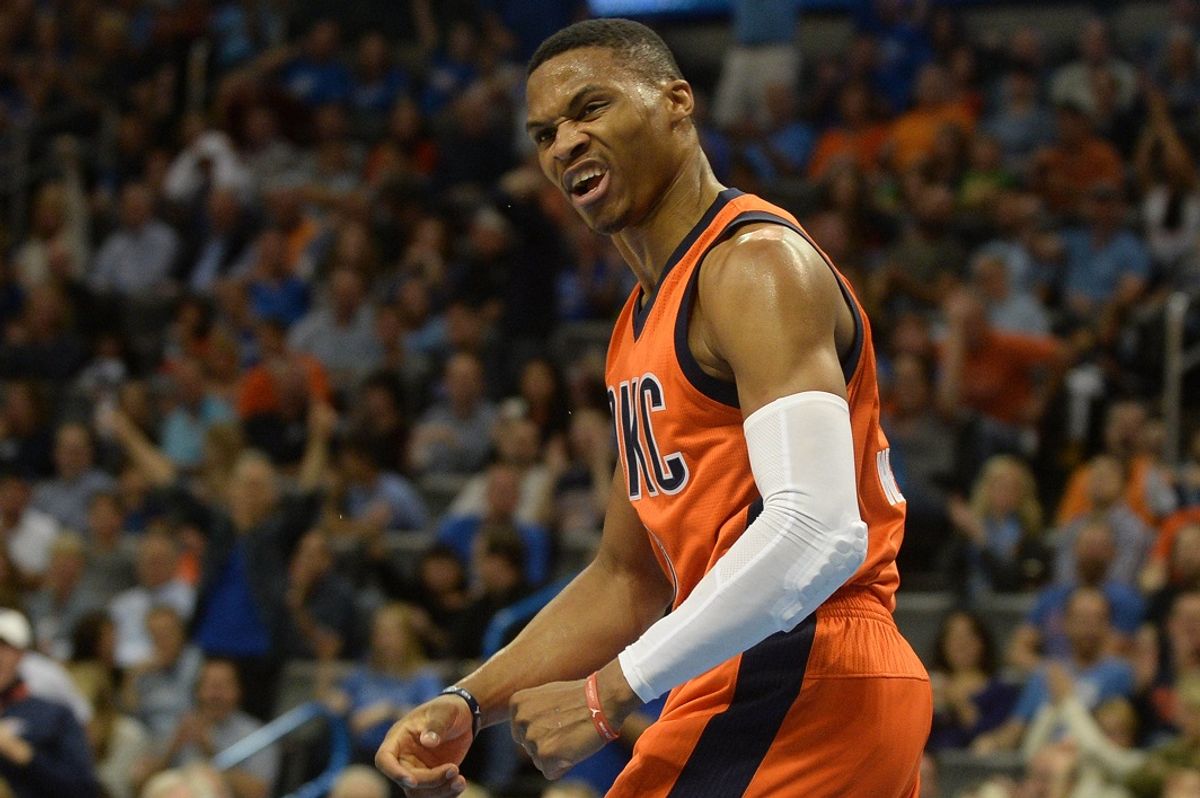 It is the night of June 26th, 2008. The NBA Draft had just begun. Rounding the corner with the 4th pick, the Seattle Supersonics take the 6'3" shooting guard from the UCLA Bruins, Russell Westbrook. Sam Presti, the general manager of Seattle/OKC, looked past other big potential players like Kevin Love, Eric Gordon, and even the Lopez brothers (Brook and Robin). Presti even thought talked about trading with other teams, for example, he conversed with the Miami Heat about the 2nd pick and even the LA Clippers about the 7th pick. However, Presti, a man on a mission, got what he wanted, the PAC-12 Defensive Player of the Year, Russell Westbrook.

Sam Presti took a chance with the Brodie (Westbrook), specifically since Russell was a shooting guard in college, and they tend to score, but at this time, the Sonics had the Rookie-of-the-Year, Kevin Durant. Many threw shade toward Presti during this time, since Seattle did not have good big men, the doubters complained that our beloved GM would have been better off selecting someone else on draft night. College analyst Dick Vitale was one of the attackers making a statement of: “It doesn’t make sense, Seattle will look back on this and realize they made a big, big mistake. (Kevin) Love would have been fantastic for them". Even to this day, it is guaranteed that absolutely no one thinks Oklahoma City would have been better off with Kevin Love then the triple double machine, Russell Westbrook.

Just six days after the 2008 draft, the Supersonics relocated to Oklahoma to become the Thunder. Westbrook said that he was excited for the position he was in, but he did not even know what he was coming to be: "I'm excited to be a Sonic" - Westbrook on draft night, but then when asked about OKC he said, "I don't know what". Within one week, the Los Angeles kid was drafted to Seattle, informed that he would now be in Oklahoma City, and started for OKC in the Orlando NBA summer league. But, this is just the beginning of our Most Valuable Player's story. (I know he hasn't won, yet, but to Oklahoma, he is the Real MVP, and always will be)

Russell's rookie season was off to a blast, even though the Thunder were terrible. As a rookie point guard, Westbrook was dominating averaging 15 pts, 5 assists, and even 5 rebounds, but when Derrick Rose (Bulls) is also a rookie, it's hard to compete. At the time Rose was wiping the court with the rest of the league, this continued until his later injury, but not before he took the RotY award from Westbrook. Nonetheless, to date, there will always be one thing no one can take from the Brodie, his triple doubles. On March 2nd, 2009, Durant was benched for a minor injury, and boy did Westbrook show what he could do. Russell finished the game against the Mavericks with 17 points, 10 rebounds, and 10 assists. The kid's first triple-double came late in his Rookie year, but he has not stopped since then. A bit of a side note, Rose didn't attain his first triple-double until one year later, not even his first season.

As years go by, games (both regular and playoffs) are flash before fans' eyes. Westbrook's numbers vary each year and the teammates of Oklahoma City come and go leading to the season of 2015-16. Injury has stricken both Russell and the Thunder from reaching the Finals or even winning a championship. Even though Westbrook comes into the season with just 19 triple-doubles, which is already an impressive feat considering Kevin Durant, now a traitor currently has only 8, yes a whopping 8, triple-doubles. Or even the NBA's two-time unanimous MVP Stephen Curry, who has yet to get one this current season and has 7 in his career. I apologize for getting off topic, but people need to realize that the Brodie doesn't quit. So, the season is still 15/16 and Westbrook is destroying the rest of the league reaching 18 triple-doubles. Little did people know that this would just be a taste of what is to come.

Any fan of the NBA would know, OKC faced the Warriors in the playoffs last season. Golden State came back from being down 3 to 1 against the Thunder to moving onto the Finals to face the Cavs. I have not had the chance to mention yet, but any elite player in the world of basketball performs a different way during the Playoffs. Russell Westbrook is an animal during the regular season, I mean the Brodie has 41 triple-doubles, not to mention the fact there is only 82 games in the season. Although, Westbrook is no longer an animal when the season ends, he becomes a monster. Number Zero has so much physicallity that he pushs from tipoff to the buzzer at the end of the 4th. The Brodie has so much talent that a reporter from Slate.com actually wrote an article stating that he can actually win the game for OKC singlehandly, or throw the game away because of how erratic he can be. Curry won unanimously twice, for scoring and shooting threes...

Unfortunately, Russell did not have the power to take on the Warriors by himself, and Kevin Durant choked as OKC lost the West Conference Finals. After the Playoffs, all eyes were on Durant, and he did what cowards do, run when things get tough. July 4th, a day of celebration, was immediately the worst day of Summer. Kevin Durant wrote 350 words saying that OKC was nice, but he would be taking his talent to California for the Warriors, the lifeless, stuck-up, shooters that are offensively unstoppable. Terrible defense though. As Summer was coming to a close, all hope seemed lost for OKC as rumors were flying around that Westbrook would no longer stay in Oklahoma. But light shined at the end of the tunnel, Russell signed an extension to stay with the Thunder for years to come. The next big event was the Michael Jordan inducting Westbrook into the Oklahoma Hall of Fame. Before the season started, many people, including both fans and members of the NBA, claimed that the Brodie would give the league an outstanding season averaging a triple double.

Now, as I write this, Westbrook is 6 assists away from averaging a triple double for the season. Leading to this point, Westbrook has broken numerous records. Two weeks ago, Russell recorded the first perfect triple-double, ever, shooting 6 of 6. He also is the first person since Michael Jordan to have 4 or more consecutive triple-doubles. The Brodie will get his 6 assists, and he is one trip-dub away from beating Oscar Robertson's record for 41 in a season. With 4 games left in the season, Russell Westbrook will get there. The sad thing about this is, Westbrook was one rebound away from getting to 42, which is fine, because he played a heck of a game and the team won, but people freaked out and complained. The world is currently in love with Westbrook that they are no longer watching for the Thunder but watching for Russell to get another triple-double. This shows that he is the Most Valuable Player for the current season. It does not go to James Harden or Kawhi Leonard, it goes to the Brodie. If Westbrook fails to get the award, he will always be Oklahoma's MVP. Through every triple-double, lost or won game, Russell Westbrook does not quit for the Thunder or for the fans.

Oklahoma City had a hero in Kevin Durant, but he spits in our faces and joined the villain. Now we have Russell Westbrook, not the hero we deserve, but the hero we need. There is a reason he is called the Brodie. Westbrook is loyal to the people he cares about, and he is showing that to OKC now. The Thunder may not win a ring this year, or even the next, but Westbrook is delivering an impeccable season for the state he adores. Russell Westbrook is the REAL MVP.