Changing your thinking, one step at a time. 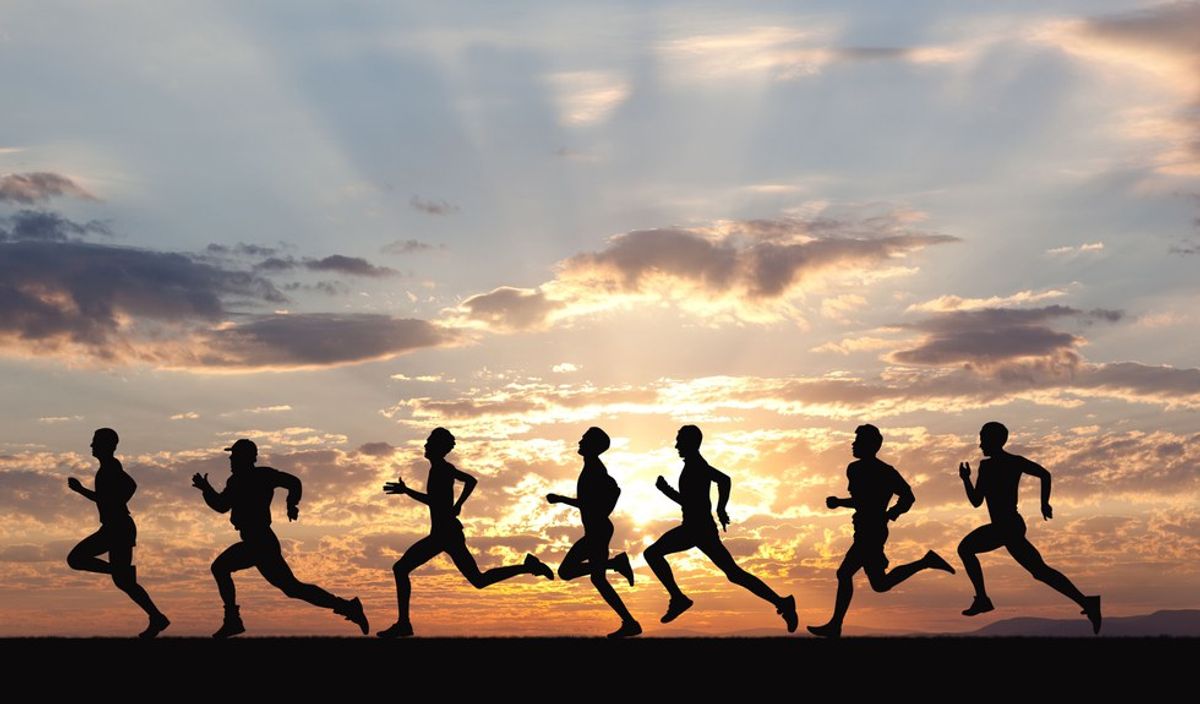 A nuisance, a punishment, or an angel in disguise, running has a different meaning to all people. Running does not require hand eye coordination, the memorization of rules, or the strength to move mountains. Running’s fundamentals on the track are to always turn left, on the cross country field surge up the hills and then sprint down, and on the street make sure that the vehicle's bumper is in the opposite direction. The world of running is one which is filled with let downs, successes, and plateaus. In the running realm the run does not begin until one forgets they are running, the runner’s high is a long-sighted goal, and it is tradition to buy new trainers every few months. Love for running occurs by chance; it can be a long or a short term infatuation.

A runner does not realize their reliance on their sport until their wheel is broken. The runner will try and try again to keep pushing on their broken wheel; they will keep jogging through the woods and racing on the track without a thought of the extreme consequences they may be victim to. No one believes that they will be the injured team mate on the side lines or the famished marathoner unable to finish the race. Once the art of running seeps its way into one’s life it is hard to fight the addiction. Running, “triggers a cascade of positive changes in your head, from feelings of euphoria to improved memory”(Loeb). The feel good impacts of running cause an athlete to refrain from admitting physical defeat. It slowly evolves from a hobby to a fundamental of life, “‘Running has defined who I am’”, comments an athlete interviewed in Runner’s World magazine. The addiction to running is caused by the body’s association with endorphins.

Endorphins are the chemicals which are released by the pituitary gland to send a feeling of pleasure through the body (Painter). They are neurotransmitters which transmit electrical signals to the brain which serve the purpose of relieving pain (Stoppler). The theory around endorphins is that because their production is increased during the time of exercise an elevation of happiness in the athlete is caused. Some scientists argue the legitimacy of this argument, questioning how it is verifiable. The skeptical scientists say that although the chemical may be being produced more rapidly, there is no way for the endorphins to pass through the blood and into the brain. However, evidence from qualified doctors and other researchers suggests otherwise.

In a blanket statement, it has become an accepted fact in society today that when one exercises endorphins are released throughout the body. When the endorphins are released and they come in contact with receptors in the brain they reduce the perception of pain. By losing the true perception of pain its impact is lessened and enlightenment increases in the person exercising. The feeling of lessened pain and sharpened happiness causes for an addiction to be formed with running. A study at Tuft’s University conducted by Robin Kanarek, professor of psychology, worked to prove that avid runners can experience withdrawals if they are unable to exercise. Kanarek argued that the withdrawals were similar to those of someone who had stopped taking an opiate. In Tufts’ study, the research team found that highly active mice showed symptoms of withdrawal when they no longer were given the appropriate space and equipment to pursue their exercise activities. Tufts University is investigating further to see if this relation between humans and running correlates further.

To the untrained eye running may appear to be a leisurely pastime which has no long term effects, but in reality running has proved to be an activity which acts as the backbone of sustaining a healthy and successful life. While driving down the road, one can haphazardly distinguish between the seasoned runner and the novice. The seasoned runner appears to run with ease: head raised, stride open, and breathing even. The novice stumbles down the road: fists clenched, forehead glistening, and cheeks reddened with exasperation. The roles could be altered: the novice could have perfect stride, but lack of speed and the seasoned runner could have puffed red cheeks and lack of form after an interval workout. Running is not a sport of beauty, but a sport which requires drive.

It may appear easy to succeed at running; all one has to do is run faster. If only it were so simple. Running tests the mental toughness and physical capability of those who dare to lace up. The art of running is not for the soft hearted or nimble toed - but the dedicated. Success is not determined on how fast one runs or the distance they travel, likewise literature is not graded on quantity, but quality. It is a true misfortune for those who are blind to the marvels of running, it brings to its audience opportunities mentally and physically that they would not be exposed to otherwise. Running's characteristic of catalyzing personal growth is truly remarkable.