The Role Of Heroism And Bravery In Beowulf
Odyssey

The Role Of Heroism And Bravery In Beowulf

How Beowulf is the ideal Anglo-Saxon hero of his time 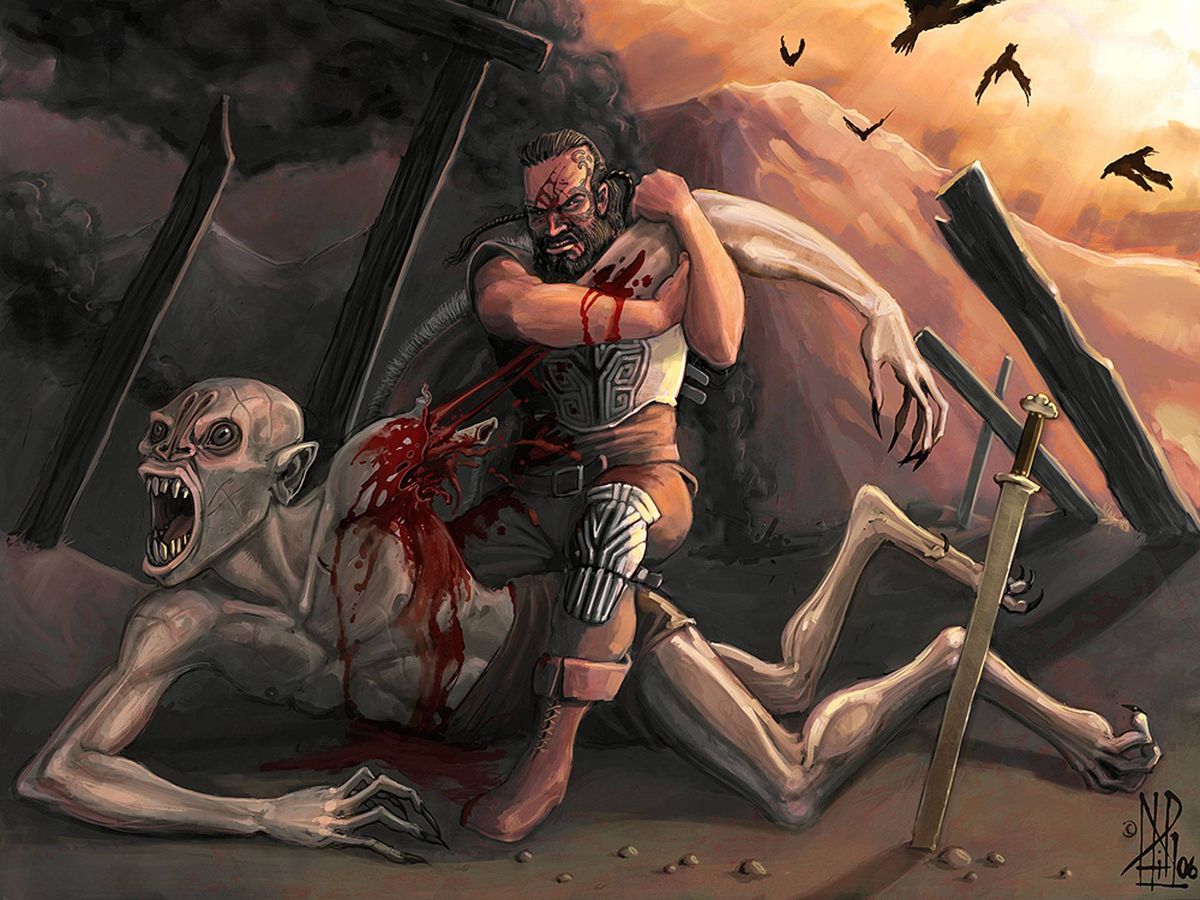 Heroism and bravery play a crucial role in Beowulf, and are clearly demonstrated through the story’s protagonist, Beowulf. By far the most courageous character, Beowulf has three key moments in which he demonstrates his bravery – when he kills Grendel, when he kills Grendel’s mother, and when he fights the dragon. Beowulf realizes the shameful effects on those who are not brave, and seeks to prove his bravery to ensure that he is remembered as a courageous hero.

Beowulf is the ideal Anglo-Saxon hero. He is mighty, brave, and will do everything he can to protect the people of Heorot. His motivation comes from his desire for glory and fame. Back in this time era, the common belief was as long as a person’s name was still spoken, his or her legacy stayed alive. This belief is demonstrated in the opening lines when the author writes “So. The Spear-Danes in days gone by and the kings who ruled them had courage and greatness. We have heard of those princes' heroic campaigns” (1-3). This is a clear example of the importance of one’s legacy. Therefore, in order to receive glory and fame for his legacy, Beowulf realizes he always must be courageous and mighty like the kings before him. By being heroic, he can ensure that he will always be remembered. He is successful in being a brave warrior and is given this heroic introduction: “There was no one else like him alive. In his day, he was the mightiest man on earth, highborn and powerful” (196-198). It is clear that nobody would dare challenge Beowulf, as he is mightier than anybody on earth. He is a brave warrior, who will not be forgotten.

Beowulf’s first feat of courage is when he defeats Grendel. Grendel is a monster that has been wreaking havoc on Heorot for years. Beowulf hears Hrothgar, the king of Heorot, is in need of help from Grendel’s attacks and says, “I come to proffer my wholehearted help and counsel. I can show the wise Hrothgar a way to defeat his enemy and fine respite“ (277-280). Beowulf is willing to devote himself fully to defeating Grendel in order to bring peace to Heorot, and for the glory that comes with it. To display his courage to the people of Heorot, he decides to face Grendel unarmed. Beowulf is able to rip Grendel’s arm out of his socket with his bare hands. Ironically, if he had chosen to fight Grendel with weapons, his fighting would have been in vain. It turns out that a spell was cast on Grendel and weapons were not able to hurt him. It seems that fate had chosen Beowulf to defeat Grendel. Fate and courage are closely related in Beowulf as seen when Beowulf claims, "Often, for undaunted courage, fate spares the man it has not already marked" (572-573). This is a bold claim, essentially saying that fate works in the favor of those who have courage. This is also seen when Unferth makes a personal attack on Beowulf’s courage and Beowulf replies saying,

The fact is, Unferth, if you were truly
as keen and courageous as you claim to be
Grendel would never have got away with
such unchecked atrocity, attacks on your king,
havoc in Heorot and horrors everywhere" (590-594).

Therefore, Beowulf likely believed that while nobody else was able to succeed in defeating Grendel, he was able to defeat Grendel because fate gave him the victory due to his courage.

After Beowulf defeats Grendel, Grendel’s mother decides to attack in retaliation. Hrothgar comes to Beowulf for help, and Beowulf seeks out Grendel’s mother in order to defeat her as well. He goes to her swamp, a place that nobody else would dare enter. Even animals were afraid of her swamp. Beowulf wears armor this time, and begins swimming down towards Grendel’s mother. He is able to swim for hours underwater, which further demonstrates Beowulf’s might. He reaches her and begins to attack. Her armor is so powerful that his sword breaks. It seems like Beowulf has no hope, but fate once again looks upon his courage, and he is able to find a more powerful sword. He defeats Grendel’s mother by chopping off her head and is praised for his courage. Only Beowulf would have enough courage to fight Grendel’s mother. After this victory, Hrothgar is able to maintain peace for many years with Beowulf’s protection.

Following these many peaceful years, a thief steals a dragon’s goblet. In retaliation, the dragon wreaks havoc on Geatland. Beowulf, now an old man, sets out to defeat this dragon. When Beowulf meets the dragon, everybody with him is afraid, and they run away. The only one with enough courage to stay and support Beowulf was Wiglaf. He explains his courage when he says,

"As God is my witness,

I would rather my body were robed in the same

burning blaze as my gold-giver's body

than go back home bearing arms.

That is unthinkable, unless we have first

slain the foe and defended the life

of the prince of the Weather-Geats. I well know

the things he has done for us deserve better.

Should he alone be left exposed

to fall in battle? We must bond together,

Wiglaf realizes that it would be better to die with courage than to survive from being afraid and fleeing. The courage would always be remembered, but there would be shame in lacking courage and fleeing. He is loyal to Beowulf even until death. Beowulf’s sword breaks when he tries to kill the dragon, and the dragon wounds Beowulf with a bite to the neck. Wiglaf is able to help Beowulf kill the dragon, but Beowulf died from the wound. Beowulf would always be remembered for his courage, and he received the glory that he always wanted.

Throughout these three feats, Beowulf was able to prove his courage and he truly becomes a hero to the Geats. Those who lacked bravery against the dragon are only remembered for their shame of lacking courage, but Beowulf’s name will never be forgotten, and his glory will live on as a result.