You Should Read Rick Riordan's Newest Books
Odyssey
CurrentlySwoonLifestyleHealth & WellnessStudent LifeContent InspirationEntertainmentPolitics and ActivismSportsAdulting
About usAdvertiseTermsPrivacyDMCAContact us
® 2023 ODYSSEY
Welcome back
Sign in to comment to your favorite stories, participate in your community and interact with your friends
or
LOG IN WITH FACEBOOK
No account? Create one
Start writing a post
Entertainment

Books written for children are books that can be enjoyed by people of older ages! 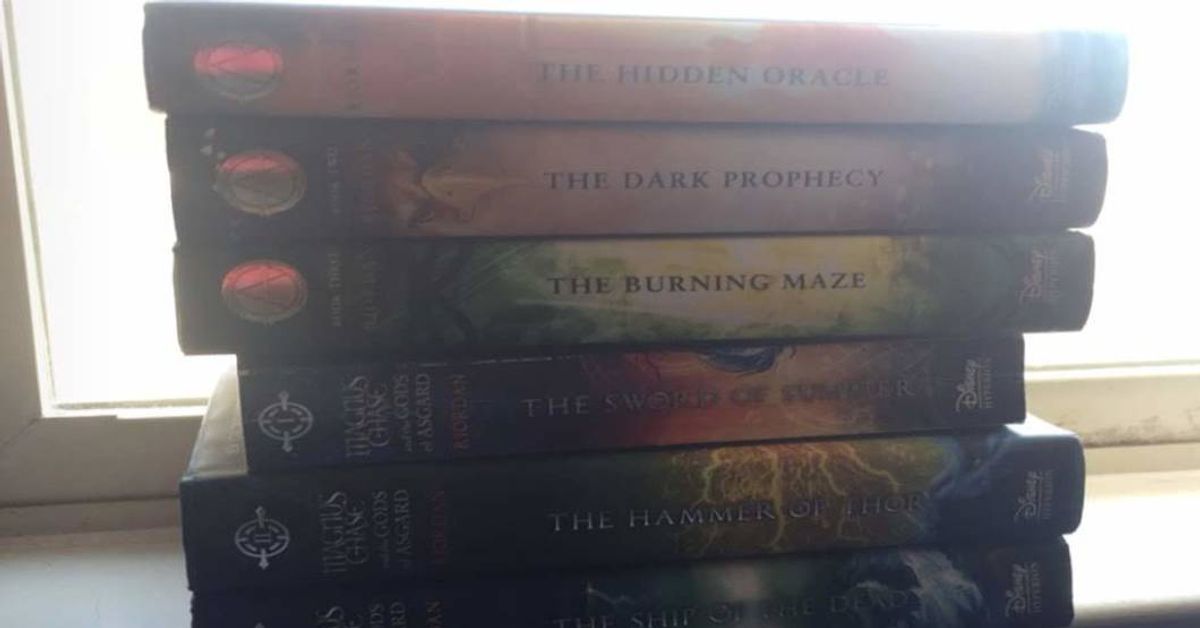 I think almost everyone who loves to read had a childhood that was shaped in some way by the "Percy Jackson and the Olympians" series. It wasn't just kids who read it, too. My mom read the books, so I'm sure there were other parents out there who read them as well. That series touched a lot of people's lives. If you were a huge fan like me, you also read the "Heroes of Olympus" series, the "Kane Chronicles," all of the short stories, and cared about Percabeth more than the fate of the rest of the characters.

I can't speak for everyone, but as I got older and Rick kept releasing books, I just didn't have the time or the energy to keep up with them or get emotionally invested. There were other things out there for me to read and I felt like I needed to move on to reading better things. My reason for not wanting to get into the "Trials of Apollo" series was as stupid as not liking the name Lester. I couldn't justify purchasing them for myself.

Luckily for me, I have a brother who's 12 going on 13. These books are written for kids his age so he has them for me to borrow. I'm almost jealous of him sometimes because he has so many awesome books to read. He didn't even have to wait a year for 'The House of Hades' after that cliffhanger in 'The Mark of Athena.' However, these books are worth buying for yourself (support authors and buy their books legally!) or borrowing from your local library!

I want literally everyone to read the "Magnus Chase and the Gods of Asgard" series, and its not even for the awesome amount of representation within the books. The main character, Magnus, just makes me ridiculously happy. Of course I love Percy Jackson, but he wasn't a character I could relate to. I couldn't relate to Annabeth either because she wasn't edgy enough. Honestly, I couldn't relate to any of Rick's previous characters. Magnus, however, I could relate to. He's edgy and snarky but also sweet with good intentions. Magnus isn't even the only character that makes me happy! They all do! It's great. I want more books in the series and I want everyone to read them.

The representation within the Magnus Chase trilogy is a big reason to read them as well. I am so impressed with Rick Riordan for taking the critique he got for Nico and applying it to give the LGBT+ community better representation with character's like Magnus, Alex, and Apollo. He took a big challenge of writing a genderfluid character and I admire the effort that he put into that. In addition to that, one of the main characters Sam (short for Samirah) is Islamic. She wears a hijab, prays, and fasts for Ramadan. She explained everything to Magnus, and Magnus, an atheist, respected that. Their friendship was admirable in that aspect and I really appreciated Sam being religious despite living in a world where Norse mythology was true. That was a question I always had, and I'm sure that for people more religious than me, that was a big problem they had with Rick's books.

It doesn't stop there, though! The Magnus Chase trilogy also features a deaf elf. He speaks in ASL (Alfheim Sign Language) and several of the other characters do as well. His deafness is never forgotten and Hearthstone, the character, is quick to let other characters know if they're talking too fast for him to understand.

My only critique for Magnus Chase and the Gods of Asgard? Thor is nasty and Loki is actually bad.

It was really nice to learn some Norse mythology, though. 'Thor: Ragnarok' was a little frustrating for me because I was like "Wait! That's not what's supposed to happen!" But then I remembered that it was a movie based off of a comic book and not mythology.

The humor in the Magnus Chase series is not exclusively for children, and I think that's what got me hooked on the series. The books are funny, the plot is entertaining, and the character development is fantastic. They're fast paced and have big, familiar themes, and I think that's why everyone can read them and enjoy them.

I can't speak as extensively for The Trials of Apollo because I am only just now reading the first book, 'The Hidden Oracle,' but I'm really enjoying it so far. They're so much fun because Apollo is a hoot. Character development is one of my favorite parts of reading, and I can already tell that there is going to be a lot. In addition, I'm learning more new and interesting things about Roman history this time, not just mythology!

The thing about Rick Riordan is that he doesn't include diverse characters because that's the thing to do now to avoid getting shamed by fans and the media. From the very beginning, Rick Riordan wrote about characters who were different because he cared about the real life kids who were different. He wanted to give them books that they could read that had people like them in it. Obviously he isn't perfect and I can't say that he does a perfect job representing everyone, but the fact that he tries and the fact that my brother can read about characters who are different from him and see them cast in a positive light is huge to me.