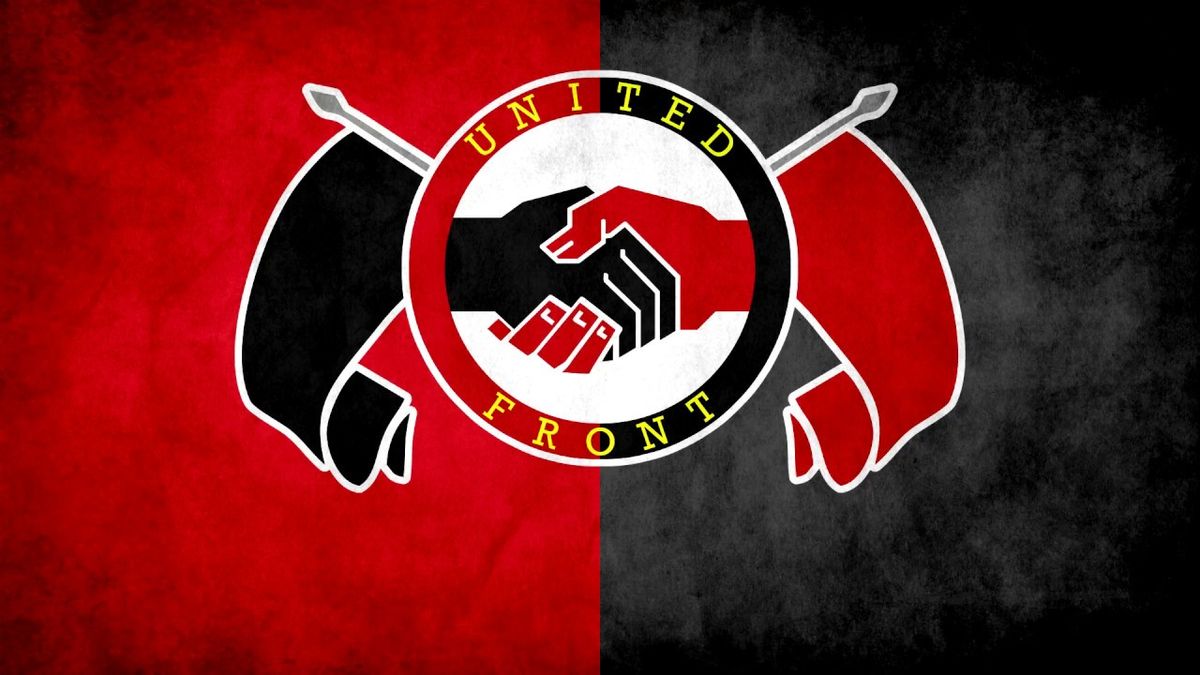 Song of the United Front

If one explores the Internet in the political field, a common terminology floats around in groups considered leftist known as the idea of “left unity”. While the ideal of this has positive sentiment that should be recognized and aimed for; the practicality of this idea proves insufficient when actually confronting the ideas of radical and revolutionary change. The problem tends to arise, particularly online, as a result of the ideological differences of the various groups on the left and what becomes considered sectarian conflicts in which arguments of history or long-term mentalities (such as state versus stateless tendencies) result in a paradoxical dead end. This dead end creates repercussions in which failure to organize in real life with those who could easily deal with common goals and common aims ultimately dis-empowers and neuters radical change and revolutionary momentum.

It brings to light the need for diplomacy as a cornerstone of revolutionary movement and collective organizational building. We must recognize that around the world, but in particularly the United States, large-scale movements will have to occur through building coalitions, confederations, and federations between organizations and individuals towards a unified end. The material conditions of the United States has always been built off of federations and coalitions coming together to overcome the challenges of the era. The Great Railroad Strike of 1877 was the closest the United States ever came to full on revolution; and it embodied the unified strength of state and stateless socialists working side-by-side. This event not only demonstrated their unifying capabilities by achieving the first ever Full General Strike; it also demonstrated how quickly a revolutionary wave could sweep over the United States, spreading across seven states and numerous cities, towns, and villages. It also saw the creation of the St. Louis commune, the closest any US city has come to creating a legitimate worker Soviet. It is through this example that we must recognize collective unity as a means of building a unified front.

This is not the idea of some Utopian Unity where everyone gets along with each other and everything magically gets better. This is recognizing the similarities and commonality outweigh the differences. We must not mistaken the flaws of individuals who corrupt organizations for the organizations or the ideologies themselves. Shitty people must be addressed and removed as barriers to the causes of liberation and revolution. But that does not automatically imply that organizations or ideologies that these shitty people originated from are to be blamed for their shitty nature. A principled radical and revolutionary must be recognized in the face of unprincipled barriers. An ideology does not equal an individual. One can critique and have differences in ideological tendencies while still working side-by-side with them. In fact, this is the greatest chances of removing unprincipled individuals from organizational action.

There are 19,505 cities, towns, and villages in the United States as of 2015. The idea that revolutionary change away from the overwhelming strength of capitalism, militarism, imperialism, etc. will happen at the hands of a single party or organization fundamentally contradicts the dialectics of history in the United States, and the overall manner in which revolutionary change must happen. Coalitions and a united front must be recognized as the greatest tool in the arsenal of any revolutionary organization; in order to form collectives that are bound together by principle, not by blind ideology or other insincerities. Trust and solidarity must be between the individuals of these coalitions that bind the organizations into a collective unity. Inevitable fracturing and implosion will result otherwise, not just in dissolving such a coalition; but will also implode inevitably the organizations themselves as they tear one another apart, and internally themselves.

The long road to change ahead is a challenge onto itself. Communities everywhere across the United States and across the world must overcome unprincipled confrontation in exchange for increasing principled action and learning. If the principles of liberation and revolution guide the individuals and organizations standing in solidarity with one another via collective coalitions; the mutual aid alone in dealing with anti-fascist actions, anti-capitalist actions, and other challenges will result in the exponential increase of the strength of those collective. Tendencies must recognize that they can work in coalitions while still acting autonomously: Maoists deal with subject A&B, Anarchists deal with C&D, Marxist-Leninists deal with E&F, Democratic Socialists deal with G&H, etc, etc. A coalition of multiple tendencies like those listed would be able to deal with A-H number of topics and issues; far more extensive than if these tendencies tried acting alone.

We exist in the year 2018 on the precipice of civilization collapse due to the barbarism and contradictions inherent in capitalism. The repercussions of ecological collapse, fascist movements, neoliberal apathy and ignorance will culminate with the extinction of the species. This reality must not be taken lightly and must be recognized as the true issue of our time. Old arguments over history and the superficial sectarian conflicts that consume so much time and energy of the collective “left” is adding fuel to the fire of our own collective suicide. We must not abandon principle, far from it.

We must actualize the principles inherent in the ideas of liberation and revolution in its fight for life and the dignity of the human species. With such a sharpening of principle, the coalitions that form between these various ideals and organizations will allow for the debate over the direction of post revolution topics to occur in an organized manner that retains a unified front. Failure to retain principled unified activity will be the death of us all. It is each and every one of our responsibilities to recognize this reality and act responsibly. To paraphrase an old saying from Shelly, “We are many, they are few.”