A new sound for a new era. 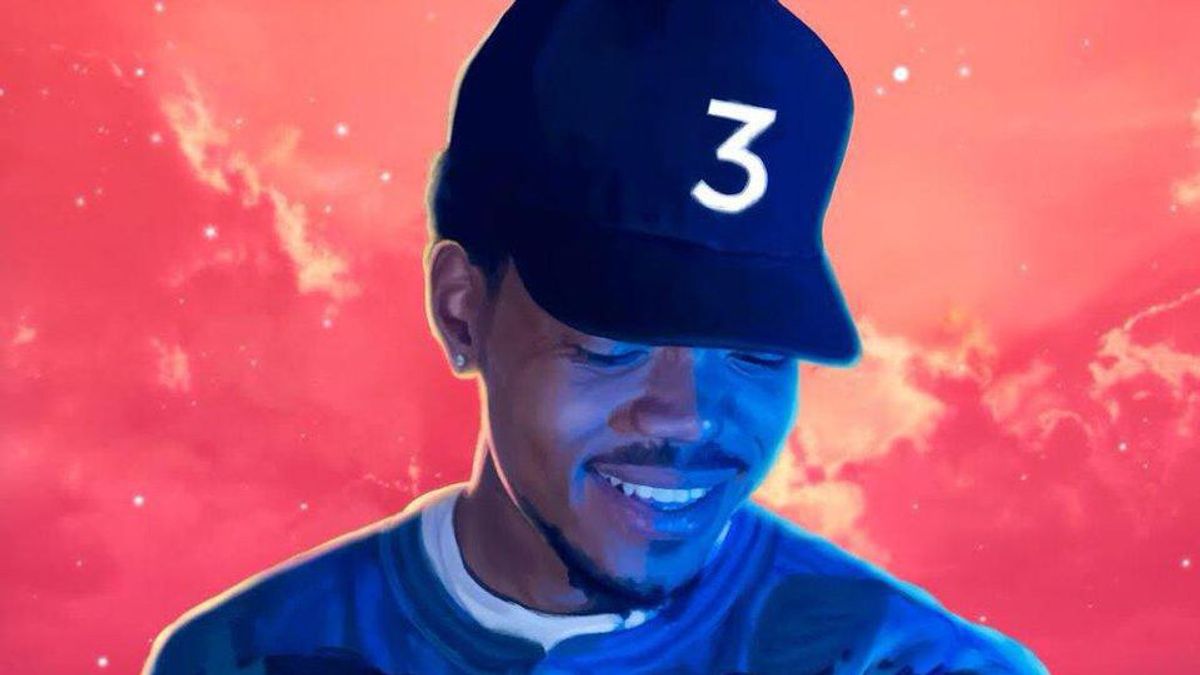 "I have been a huge fan of Chance the Rapper since his first rather-underground mixtape 10 Day, and my love for his work was only solidified by his second mixtape Acid Rap, which made him a bonafide star in the more mainstream hip-hop world. (And got him a small guest spot with Questlove on Comedy Central's The Eric Andre Show, in which he sat in a giant cup of coffee, which I highly suggest you watch if you like smiling out of confusion.)

While his follow-up foray into gospel and jazz with Donnie Trumpet & the Social Experiment on the album, Surf was not my favorite of his musical endeavors. It showcased his attempts to grow as an artist and tap into deeper musical histories and themes. Even his televised performances for these tracks on shows, such as The Late Show with Stephen Colbert and Saturday Night Live, displayed the newfound depth of the topics he was concerning himself with. This all increased much of the hype surrounding this album, especially regarding what sort of musical sound he would assume for this new collection of songs.

Also, if you haven't had the chance, I highly recommend watching Mr. Happy, the short film he starred in, in 2015. This short grapples with dark and complex themes surrounding the realities of life, again, revealing his new, more nuanced approach to the content he is creating.

What made me most excited for this record, though, was his feature on the first song, "Ultralight Beam," off of Kanye West's most recent album, "The Life of Pablo." This track is by far my favorite off of "TLOP," in no small part due to Chance's unbelievable verses that show off his incredible flow, lyrical deftness and charisma, which he utilizes to tease his upcoming album and its impending success. My boyfriend actually mocks how often I play this song simply to rap Chance's part, but I can't say no to a good Kanye collab with a relatively up-and-coming star.

All of this prolog is to say that I was very excited for this album, and in many, many ways it did not disappoint, bringing in new, more mature stylistic sounds, but there are also a number of significant missteps in his forming of this new persona. As such, I have broken the tracks into two categories below: Favorite and Least Favorite Tracks, with a short description of why each song fell into each grouping. So, continue reading for my opinions on each track!

1. "All We Got" (feat. Kanye West and Chicago Children's Choir)

The mixing on this song isn't great, bringing autotuned Kanye and a lot of trumpet too far to the forefront, drowning out the great high-energy and synthy beats. But the song is good overall, as both Kanye and the trumpet-playing would work if better-mixed; we get glimmers of the more balanced sound the track could have had when the choir comes in to temper what sounds like many Kanye's. I also appreciate the nod to Chance's previous album's first track with "and we back and we back."

Here, again the choir shines on this song and works surprisingly well alongside the very mainstream rappers Lil Wayne and 2 Chainz. They both have some great verses and work within the larger upbeat soundscape melded with gospel to create a party-worthy track.

This is a beautiful and simple interlude with a sweet message that serves well to unify personal narrative tracks with more religious ones.

This song is highly relatable and gives me a great deal of nostalgia for Chance, as he recounts past relationships and the way people grow apart from one another as they move forward in life. He expresses this in an interesting and subtle way, through changes in peoples' drug use and the way this can be indicative of larger changes in one's goals, aspirations, and future directionality. In fact, TheNeedleDrop's Anthony Fantano, an online music reviewer, noted parallels between this track and "Acid Rap's" "Cocoa Butter Kisses," which discusses some of the personal alienation resulting from cigarette smoking. Overall, this track is beautiful, with the gospel component more deftly employed here than the rest of the album, as the song builds to its full and powerful sound, as opposed to starting off full-throttle.

This track feels like the perfect blend of all of Chance's sounds from the past couple years. There is musical similarity with "Acid Rap's" dynamic "Good Ass Intro," with some trap vocal samplings similar to some of the lesser tracks on the album, and gospel vocal backings supplemented by impactful narrative verses by Chance.

I'll be honest, the lyrics on this track aren't fabulous, but I could literally dance to this "all night." It's a super fun song that focuses less on content than form, but I am OK with that; every album needs a song or two of this sort, especially an artist who's claim to fame originated from the playability of his music. Chance's more laid-back vocal delivery is an interesting choice on such an upbeat song that works surprisingly well.

This song reminds of "Angels" in its all-encompassing sound with gospel backings that are more hopeful than overtly religious, happy-sounding beats and highly intimate verses from Chance. Also, T-Pain unexpectedly fills the preacher role quite well. And the big choir this two-for track builds into for "Drown" is beautiful and an unexpected continuation that adds in some awesomely jazzy instrumentation.

This track has some great semi-down-tempo verses by Chance, with interesting synthy accents in the background, and brings the "Blessings" refrain back in a far more nuanced way. I prefer Chance, Ty Dolla $ign, BJ the Chicago Kid and Anderson Paak singing the gospel parts more, as it is less whiny sounding, reinterpreting the refrain in a more bluesy way. Thus, the repetition feels less annoying and more naturalistic, and the continued religious theme wraps the whole album up quite well.

1. "Summer Friends" (feat. Jeremih and Francis and the Lights)

This song could have been so good, and I am so disappointed that poor mixing and song construction made a great track not very listenable. After Bon Iver and James Blake's standout track "I Need A Forest Fire" on James Blake's newest album, "The Colour in Anything," this sounds like a synthy version of their vocals. But the mixing starts to make them sound chipmunky, and far too high-pitched, and then they run up against Chance's verses, which are actually quite good but become hard to focus on. I like the general chill vibe and personal lyrics, but not the overall sound.

I first saw this song performed on "The Tonight Show with Jimmy Fallon" and really disliked it; I was confused and felt like I was missing something, though, because every Chance fan I knew seemed to love it. While I do like the track more on the cut on the album, I find Jamila Wood's voice to be very whiny-sounding and the religious language and imagery to be a little too opaque on the choir verses. Chance has some great lines on here, so I probably would've preferred it with less emphasis on Woods.

Don't get me wrong, this is a good trap-style song I could easily hear at a party, and don't dislike on its own, but just doesn't fit as well as it could within the larger album themes and styles.

This song has some interesting personal lyrics, but the feature by J-Biebs is rather uninspired, playing less on the new sound that has reignited his fame and more on his older, musically-underwhelming and sugary pop crap.

5. "How Great" (feat. Jay Electronica and My cousin Nicole)

This song hits you over the head with religious symbolism and references, so even though the gospel vocals are very pretty, I find the lyrics to be a little lacking in nuance or unique interpretation. In fact, this track sounds like a song they used to play during mass at my Catholic middle and high school to make church and church music seem "cool," and I just couldn't shake how much that made me wish this song didn't exist.

This falters in a similar way to "Mixtape" in terms of what it tries to be. Overall, the music is better on this track, but the lyrics are lacking, feeling like a logical regression from "Same Drugs." Future's sound is too distinctly trap-like to mix well with the sound of the track.