A Review: The 20th Anniversary Tour of 'Rent'
Odyssey

A Review: The 20th Anniversary Tour of 'Rent'

A new non-Equity tour of "Rent" continues to find its feet on the road. 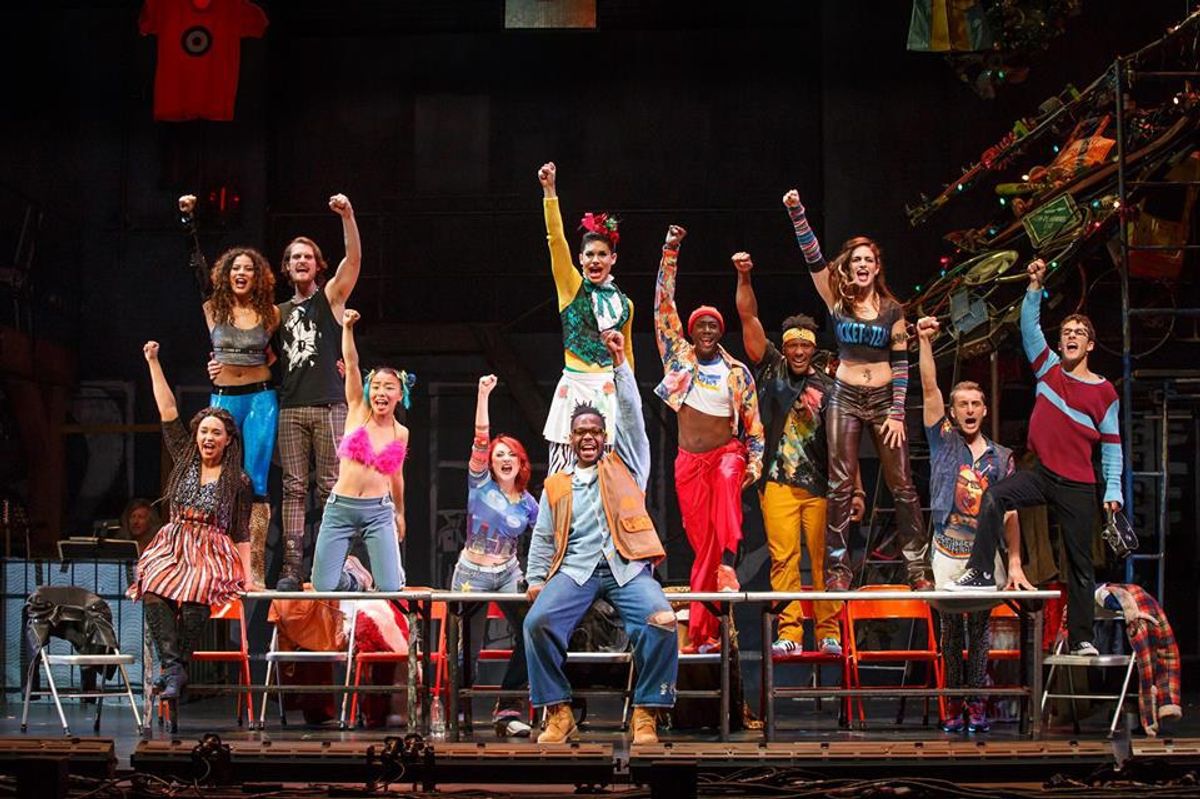 In 1996, a mainly unknown composer named Jonathan Larson wrote a rock musical based on Puccini’s opera “La Boheme” (previously presented by UF Opera Theatre this spring). Set against the backdrop of a decrepit East Village in 1990, it covered such dark and possibly unappealing themes such as poverty, class divide, death, and disease.

When the show first opened at the New York Theatre Workshop Off Broadway, Larson left his job as a waiter at New York’s Moondance Diner. However, the jump from retail to the big time was nearly short-lived following an untimely death from an aortic aneurysm on the show’s first preview performance.

This death was the end of Jonathan Larson, but his musical, “Rent,” lives on. After posthumously garnering four Tony Awards (including Best Musical) and a Pulitzer Prize for Drama, “Rent” would run for 5123 performances at the Nederlander Theatre on Broadway. It is currently running in another Off-Broadway production at New World Stages.

The show would launch the careers of actors like Anthony Rapp, Adam Pascal, Idina Menzel, Rosario Dawson and Taye Diggs. Its messages of community, love and creation would inspire audiences of all generations for years to come.

In honor of the musical’s 20 years of measuring life in love, a non-Equity national tour is being presented by Work Light Productions. This production made it’s fourth leg on a tour of approximately 75 cities in Gainesville, Florida, at the Curtis M. Phillips Center for the Performing Arts on the University of Florida campus. This venue—like the multitude of large-scale performing arts centers hosting this production—seemed rather large for a production, and the best seats for this production would have been the lower mezzanine or back orchestra sections of the theatre.

To summarize the show, “Rent” is a musical about starving artists, struggling to create fulfilling work, make a buck and (in the case of several characters) live with HIV/AIDS. Mark Cohen, a filmmaker (played by Syracuse graduate Danny Harris Kornfeld), acts as the narrator, documenting the ins and outs of his friends’ lives from Christmas Eve of 1989 to Christmas Eve of 1990. His ex-girlfriend, performance artist Maureen Johnson (played by Katie Lamark, another Syracuse alum), is in a new relationship with female lawyer Joanne Jefferson (played by Wright State alum Jasmine Easler). Roger Davis, an HIV-positive rocker (played by Pace Alum Kaleb Wells) trying to write one last song before his time is up, falls in love with a drug-addicted dancer named Mimi (Skyler Volpe).

Mark and Roger are about to be evicted by their nouveaux-riche landlord and ex-friend Benjamin Coffin, III, or “Benny" (played by Penn State graduate Christian Thompson), unless they stop a protest performance Maureen is putting on in a vacant lot populated by the homeless. Meanwhile, anarchist and professor Tom Collins (Aaron Harrington) meets an eccentric drag performer and percussionist named Angel Dumont Schunard (played by NYU Tisch graduate David Merino). The two help each other cope with the disease they share (both are HIV positive), and they fall in love.

Director Evan Ensign reproduces Michael Greif’s original Broadway staging, often to the point where it does not seem fully re-energized. The show’s ensemble of 24 seems to be plodding through the beginning of Act One, with the songs “Tune Up 1/Voice Mail 1” and the show’s title number, among other places in the show. Despite this, the overall performance was not lacking in vocal quality, energy or drive. This was especially seen in numbers like “La Vie Boheme,” the reprise of “I’ll Cover You,” and the ever-so-timeless “Seasons of Love.”Members of the show’s ensemble, playing roles varying from homeless people to the main characters’ quirky parents, almost serve as a Greek Chorus during the various renditions of “Christmas Bells are Ringing.”

Marlies Yearby’s choreography (featured in the Broadway production) did not detract from the show’s overall stage picture. The most dance-like choreography Yearby uses is during the number “Tango Maureen” (where Mark and Joanne dance a tango lamenting Maureen’s coquettish behavior).

Kornfeld's Mark was not the most memorable performance compared to the rest of the cast, rushing occasional lines. However, his comic timing and stage presence allowed Kornfeld to effectively lead the show.

Wells’ Roger, at the beginning of Act I, seemed rather unbelievable, but by the Act II, we are able to see Wells delve into the feelings of breakup and despair after breaking up with Mimi.

Volpe’s Mimi was one of the most believable of the performances of the evening, genuinely reacting with her fellow ensemble members, and regularly plays around with her environment, especially when dancing on the upper loft of the stage during the song “Out Tonight.” Despite this, her acting choices can be somewhat compensatory for mild musicality issues. Volpe does make slight mistakes with pitch and rhythm—often to the point where she sings one of her numbers, “Without You,” out of time with the show’s band.

As Angel, one of the challenges of portraying the role would be avoiding the typical “drag queen” stereotypes (associated with "RuPaul’s Drag Race"). Merino balances his Angel with equal parts compassion and sass, and hhe is able to find a sense of strength and perseverance, even in the scenes where he is hospitalized and succumbing to AIDS.

Thompson, as Benny, has a resonant and buttery voice and does not overdo his character, not playing the role as excessively greedy or excessively sympathizing as in previous productions. The only weakness in Thompson’s performance would be his rushing of lines, rather than adding color to Larson's words.

Easler, as Joanne, should be praised for her vocal quality, with consistent vibrato (as heard in numbers like “Tango Maureen” and “Take Me or Leave Me”) and a powerful belt.

As Maureen, Lamark is willing to release any inhibitions, having a ball onstage—especially during her character’s main musical number “Over The Moon.” Lamark makes bold and popping choices during this number, owning the song rather than simply performing it based on Idina Menzel’s interpretation. One of the unique choices Lamark makes in “Over the Moon” would be impersonating the “Suicidal Mickey Mouse” referred to in the song—which can be seen as dark yet somehow adorable.

Some of the technical elements in this production were originally featured in the original Broadway production. The two production values that were taken from Broadway were the show's scenery (designed by Paul Clay, and adapted by Matthew E. Maraffi) and costumes (designed by Angela Wendt). Both designs are relatively simplistic compared to most Broadway shows. The set features a series of various scaffoldings, tables, and a metal sculpture representing a totem pole and Christmas tree. This set gives the show's cast plenty of playing space. Wendt's costumes consist of standard attire from the 1980's and 1990's, with equal parts neon and flannels.

The new production values in this show include Jonathan Spencer's lighting design and Keith Caggiano's sound design. Both Spencer and Caggiano's designs ring true to the show's original Broadway staging while remaining up to date with the various technologies available in the theatre today. The most demanding and elaborate element of Spencer's lighting would be illuminating the metal tree in various colors to represent Angel's multicolored Christmas tree and the roaring flames seen in the show's riot scenes.

From a sound perspective, many Broadway national tours struggle to balance the sound of the actors with the orchestras accompanying them in the pit, usually with the orchestra overpowering the actors (or vice versa). Caggiano, however, successfully balances the actors' microphones with the sound of the show's 5-piece rock band (under the direction of Samuel Bagala). As a result, every voice is heard at its best, even from the upper balcony.

Whether you are a long-time "Rent-head" or a first timer wishing to lose your "Rent" virginity, this production will allow you to relive the thrill that comes with the show while enjoying fresh new moments that come from a relatively young cast (the majority of this show's actors are one to two years out of college musical theatre programs). If you would love to see a musical about perseverance and leaving a legacy with a cast representing Americans of every color and creed, but can't afford to see "Hamilton" on Broadway, this production of "Rent" will give you a similar feeling of optimism and excitement that we could all use in the wake of a cynical future.

For Cities, Dates, and Ticket Information, log on to RentOnTour.net or Facebook.com/RentOnTour.