A Response To Donald Trump’s Promise To Protect The LGBTQ Community
Odyssey
CurrentlySwoonLifestyleHealth & WellnessStudent LifeContent InspirationEntertainmentPolitics and ActivismSportsAdulting
About usAdvertiseTermsPrivacyDMCAContact us
® 2023 ODYSSEY
Welcome back
Sign in to comment to your favorite stories, participate in your community and interact with your friends
or
LOG IN WITH FACEBOOK
No account? Create one
Start writing a post
Politics

Watch his actions, not his words. 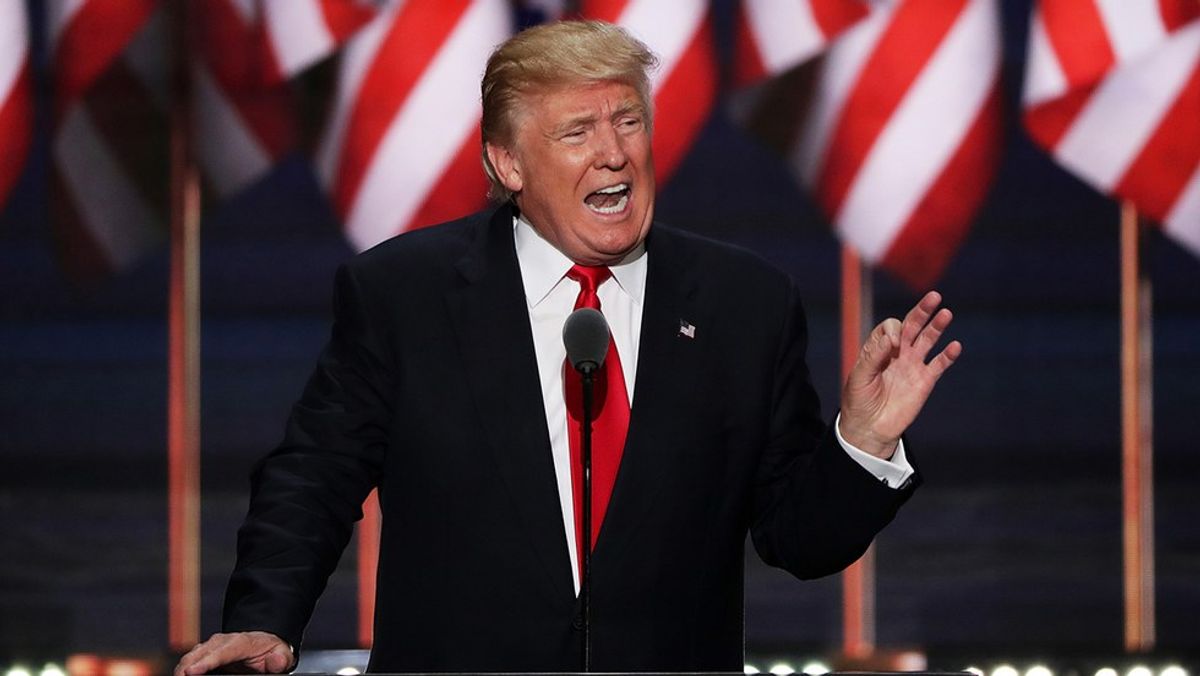 In a speech at the Republican National Convention in Cleveland, Donald Trump promised to protect the LGBTQ community. As a private citizen, Trump was originally unopposed to marriage equality, and in the early moments of his campaign—remember when we thought he wouldn’t make it this far?—he was actually in support of transgender individuals using the bathroom that identifies with their gender, rather than the sex on their birth certificates. However, as the race narrowed, Trump pivoted to cater to the radical right-wing population and became increasingly hostile to the queer community. Now, as he stood with the decreed nomination in his meaty, Cheeto hands, he tried to win back the general population with a paltry attempt at reaching LGBTQ people.

Let me not mince words: Donald Trump will not, in a million years, ever protect our community. To even think that he might, for a second, be benevolent towards us is a dangerous delusion. He will use, abuse and discard us for his own benefit. He has made his campaign on isolating and marginalizing minorities—he called Mexican immigrants rapists and drug-smugglers. He demeans women. He clumsily uses the deaths of young black men at the hands of police officers for his own benefit. He is not good for us—he will not protect.

The very idea that Trump could have the empathy and brainpower available to help the queer community is laughable. He doesn’t understand our struggle—and if he does, he doesn’t care. He cares about winning—he cares about power. He’ll say anything, do anything and be anything he has to be to get where he wants: the top.

And if Trump’s words might have you believing that he could be good for our community, then his actions will show you that he’s a crock of shit. He has made Mike Pence, the governor of Indiana, his pick for Vice President. Mike Pence passed the bill that legalized discrimination of LGBTQ people based on religious ideologies. He supported conversion therapy. He has no respect for us because he does not view us as people, let alone as equals. Trump’s choice of VP is dangerous because if Trump decides that he doesn’t feel like being President anymore—maybe when Putin doesn’t listen to him, or he feels demeaned by Angela Merkel—Pence will be the next in line. A homophobic, dangerous man will be leading America. And in a time when LGBTQ rights are still up for debate, and many of the Republican presidential hopefuls ran on campaigns for “traditional marriage”, the fact that Trump has chosen Mike Pence as his nominee means that he will not fight for us, because that is the hard thing to do.

The easy thing, always, is the wrong thing. The hard thing would be to stand up against Republican bigots, to unveil their racist, misogynistic views and disrupt the coded language they use for “tradition” and the “good ole days” when black people and white people were segregated and being gay was a crime. If Trump was for us, then his actions would reflect that. As it stands now, Trump and Pence would represent danger for the queer community.

Trump thrives on attacking marginalized groups. He only used the LGBTQ community as a ploy for attacking an even more marginalized group: Muslims. He doesn’t care about bathroom bills and religious freedom laws. He would let those happen over and over if it means that he gets to sweep in and remind everyone that as much as you hate gays, there’s someone else for you to hate even more.

Trump can’t protect the queer community because he won’t ever stop belittling, abusing and attacking minority groups. He won’t ever stop pandering to the bloodthirsty white cisgender, heterosexual population. Watch his actions—don’t listen to his words. See what he does. And so far—allowing workplaces to ban men and women from restrooms, stripping them of dignity, choosing a conversion-therapy proponent who legalized queer discrimination as his second in command—Trump has proven nothing of what he claims.

Nicole Marie Nigro
Individual Creator
5104
c1.staticflickr.com
Where to start...... Let me start with the cliche that life throws us curveballs and what we do with it is what counts.