This election has made us feel gross, and SNL finally said it 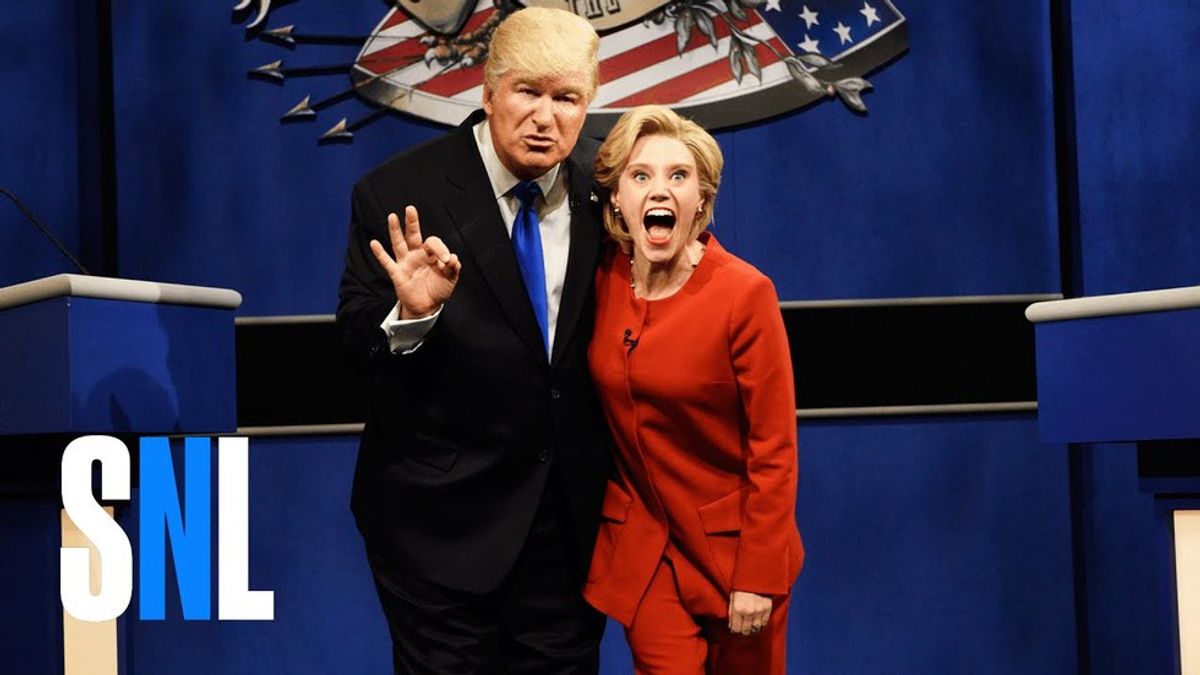 In what was the last "Saturday Night Live" episode before our country will be forever changed—not hyperbolic, just the truth—the typical Clinton-Trump cold open took a weird, unexpected and surprisingly moving turn.

Hillary and Trump appear on the "Erin Burnett: Out Front" show. Hillary is grilled on her emails—Comey, I’ve got, like, SIXTY DIFFERENT THINGS TO SAY TO YOU, BUT I’LL WAIT—and Trump makes out with an FBI agent, Putin and a KKK member, and no one is deterred from talking about the emails.

It goes on in the typical way: Donald jokes about how voters must deeply hate Hillary to ignore everything that he’s done—Hillary agrees—when suddenly the facades on both actors break and Alec Baldwin and Kate McKinnon look at the camera and just stop.

“This whole election has been so mean,” says McKinnon.

Baldwin and McKinnon escape the studio and rush to Times Square and give out free hugs. They hug babies and Trump supporters and Hillary supporters and each other and it’s so cute and fun. And in the end, they come back to the stage, arm in arm and talk to SNL’s audience, and the world.

“Now it’s time to get out there and vote,” said Baldwin. “None of this will have mattered if you don’t vote.”

“And we can’t tell you who to vote for, but on Tuesday, we all get a chance to choose what kind of country we want to live in,” said McKinnon, her voice audibly breaking.

I don’t know what I was expecting of the last pre-election Trump/Clinton cold open, but I wasn’t expecting that. And I didn’t realize how much I needed that—an acknowledgement of what this election has done to us—until I heard it.

For the last few weeks, I’ve been increasingly tired with the election. I’m a strong political person, and as a journalist I try to read and learn and write as much about the election as I can, but the nastiness and low blows and meanness—middle-school level of meanness—has made me nauseous. It makes me feel gross.

A political election for the presidency should not have turned into this. It should not have been about mean blows and backstabbing and corruption claims and racism and misogyny and homophobia. It should’ve been two smart, respectable, respectful people who have two different plans for running the country. That is what an election should be. A choice between two plans. Between two different ideas. Not this. Not this perverse beauty pageant.

I encourage everyone to go out and vote, and vote on the ideas. Vote on whose vision of America you agree with.

I am afraid for Trump in the White House. Not in a “meta” way. In a real way. In the cosseted state of Massachusetts, in a liberal university, having grown up in an accepting family, I as a member of the LGBT community have lived in a relative bubble. But it struck me the other day, that if Trump and Pence get into the White House, that bubble might pop. I will be at risk for intense discrimination, for losing jobs, for not being able to live where I choose. I will be losing my rights—Trump and Pence support bolstering the First Amendment to legalize discrimination on the basis of “religion.” I will be unsafe in this country—in 2016, I will be unsafe for just being who I am. And that’s a deeply unsettling, scary feeling.

You might not know me. You might not care. That’s fine. But know this: when any person who lives in this country, born here and raised here and expected to pay taxes and abide by your laws, wakes up wondering if this country will hurt him or break him or deny him his humanness, it affects all of us. Stripping away human rights and basic respect breaks down all of us.

So no, I won’t tell you who to vote for. I’ve told you who I voted for, who I stand for, and why I do it. But please vote. Even if you think your vote doesn’t matter, it always does. It matters because you live here, and you belong here, and a vote is your voice.

Please vote for the candidate you believe in, the candidate who will bring America up and brighter and more beautiful. Vote. Use your voice.