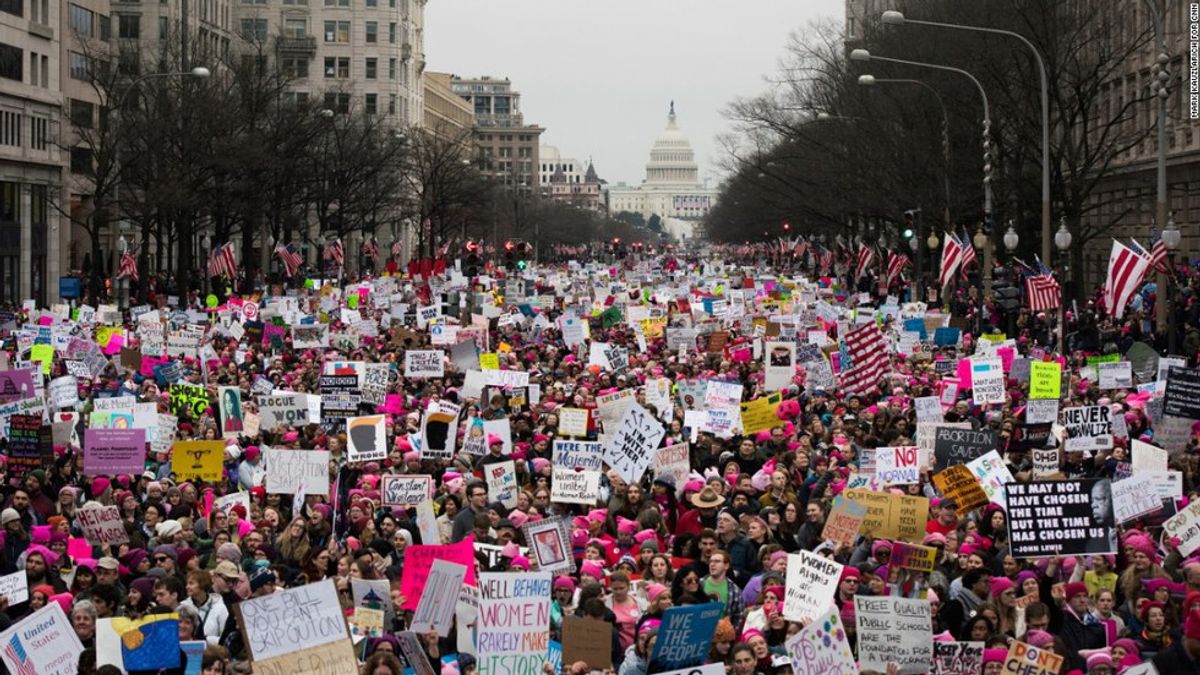 Imagine you're at the championship youth soccer game to watch your brother, sister, son, daughter, friend, or whoever you might be at such an event to support. The game ends with a shocking upset where the team many people predicted to win ends up losing. Now the person you came to cheer for is on the losing team, devastated and shocked. You go to congratulate them on a good season, even though they got second place.


You say, "Hey buddy! You played great out there! Don't be sad, there's always next season."

"Now there," you say, "Don't be a sore loser. You lost fair and square. If you were the better team, you would've won. Besides, it's just a game. Life goes on."

Well that's what's happening to many of the liberals shocked and appalled at the election of President Trump. I've heard frequent rhetoric from my politically conservative Christian friends that the protesters are sore losers. "Get over it," I hear, "Stop being such a sore loser and move on"

That may work when you're talking about a game, but it's not a game here. People's lives and wellbeing are at stake.

Don't believe me? There are many who don't like the Affordable Care Act (ACA) because of the higher premiums, and they feel that they're getting worse coverage and medical care. It's a valid reaction.

What's also a valid reaction is the joy that some people felt when they could now afford healthcare because of the AHA. For those with pre-existing conditions, it can be incredibly difficult to acquire affordable insurance, or even get insured at all. Trump and many in the GOP have stated that they want to repeal the ACA. Now there are people who are afraid that without a replacement, they will lose their insurance. If they lose coverage, their quality of life could be in jeopardy, and could face a tough choice between death or staggering debt. It's not a game. It's also no wonder they are so vocal about their concern.

So if your "side" or "team" lost, there are legitimate concerns about a variety of new legislation and policies. A team losing in the Super Bowl doesn't affect a fan's livelihood. A candidate losing, or a certain candidate winning absolutely can. So what is the American thing to do here? Protest of course! Our country was founded by protestors and rebels.

Now this isn't a support of the message many of the protestors have, but of the act of protesting itself.* Women took to the streets and it drew attention to their issues a hundred years ago. As I highlighted in my article on MLK, the Civil Rights movement was a complex series of protests. Yet both movements were criticized. It's odd that Christians have been especially known to criticize these protests. Were the people marching in the women's suffrage movements and Civil Rights movements a bunch of whiners and sore losers too?

Ironically, thousands of Christians (and non-Christians as well) will attend the March For Life this Friday in Washington. Are they sore losers? Roe v. Wade was decided over 40 years ago and Pro-Lifers still aren't "over it". So why is it ok for Christians to be sore losers over this, but it's not ok when people are genuinely concerned about their health, immigration status, and the questionable example set by the President?

The sad truth is that it's hypocrisy. Now many of my Christian friends cite a common argument that although the highest court in the country may have ruled in favor of abortion, the high Judge (God) has ruled that unborn life should be protected. Even though Romans 13 and similar passages tell us to obey governing authorities, there is a higher law, which is the justice of God. MLK argued in his Letter from a Birmingham Jail that many in the Bible peacefully opposed the unjust laws in the Empires they lived in.**

As far as I know, no one seems to call those in the Pro-Life camp sore losers. Why don't people do that? Because abortion isn't a game! It's not like the Super Bowl where a bunch of grown men throw a ball around; lives are at stake here.Yet somehow Christians are unable to see the same urgency apparent in the hearts of others. The issues that surfaced in this election are so important to some people that millions around the country marched to express their frustration. That's a reason to listen. We have become so obsessed with certain issues that we've forgot how to listen to issues of justice and mercy and the love of God.

Even many liberals looked inward after the election and admitted that they have become self-righteous and resorted to calling people bigots who didn't agree with them. This article highlights the introspection post-election. In the same way, we are setting ourselves up for failure as Christians** if all we do is resort to name calling in our own way.

I write all this, not to speak on politics, but to encourage my fellow Christians to listen, and to let those outside the faith know that there are those of us willing to listen and understand.

*I am hesitant to take any particular side as there are always those who use opportunities such as the Women's March, which at it's core is rooted in non-violence, civil dialogue, activism, and repelling hate. However, many participants have gone viral and are facing criticism for hateful signs and rhetoric. Because of the many mixed messages being sent by those at these protests, I do not wish to identify with it. However, I am fully supportive of the fact that it was about as peaceful as a mass protest can be.

** This is just a synopsis on the theology on protest. For more information, please refer to the MLK article.

*** I am aware that not all Christians are far-right, conservative Republicans. At the same time, Christians have become increasingly associated with that particular brand of politics. This isn't to say one say is right or not, but simply that we must listen to protest, resist name calling, and look introspectively at our own hypocrisy in these troubling times.