Why Professor Pyg Is The Creepiest Batman Villain
Odyssey
CurrentlySwoonLifestyleHealth & WellnessStudent LifeContent InspirationEntertainmentPolitics and ActivismSportsAdulting
About usAdvertiseTermsPrivacyDMCAContact us
® 2023 ODYSSEY
Welcome back
Sign in to comment to your favorite stories, participate in your community and interact with your friends
or
LOG IN WITH FACEBOOK
No account? Create one
Start writing a post
Student Life

Why Professor Pyg Is The Creepiest Batman Villain 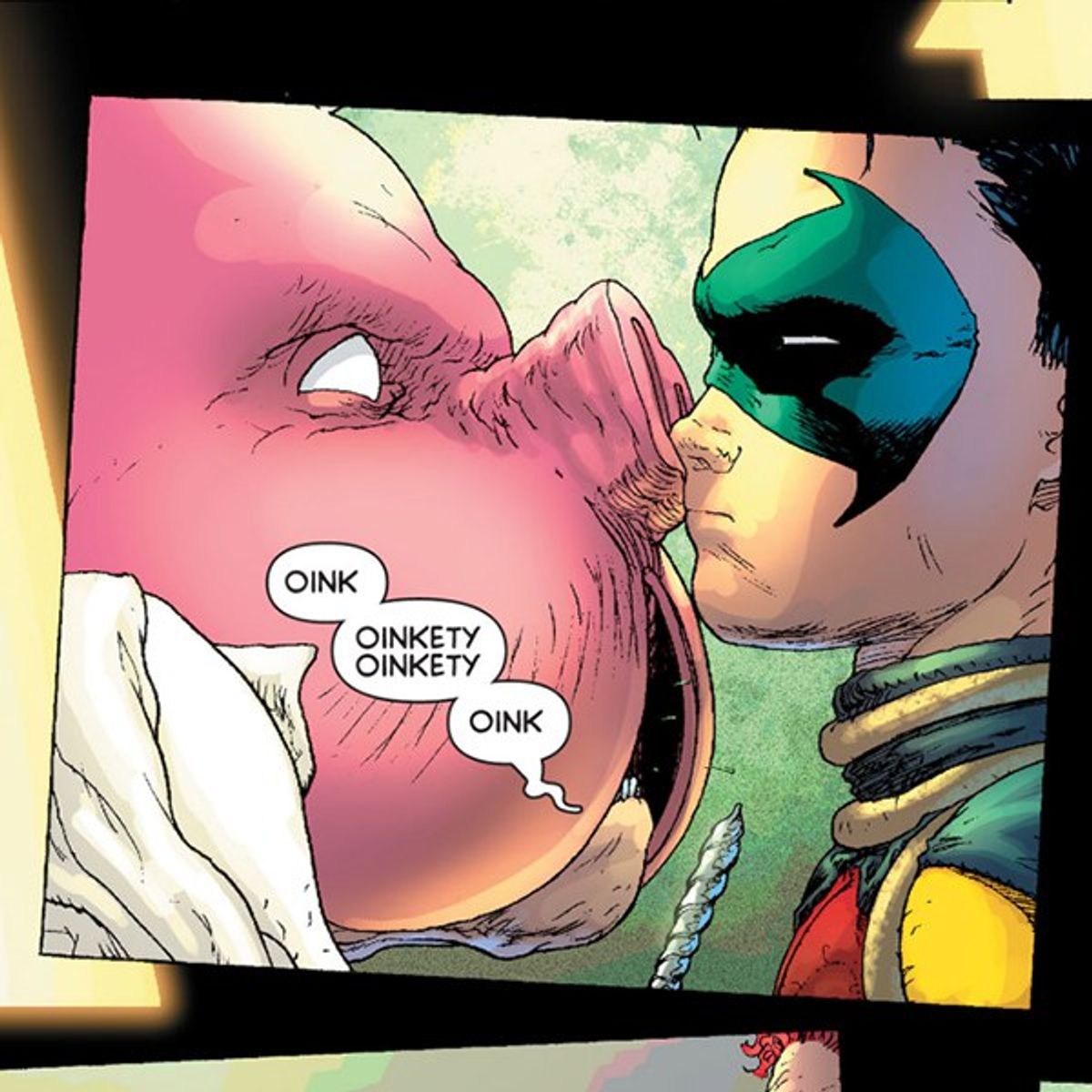 When we think of Batman villains, we have our go-to A-List villains: Joker, Penguin, Riddler, Scarecrow, Bane and so on. Sure they are messed up and do some horrible acts, but who is the creepiest villain of all time? Who really does the most bizarre acts? For me, it’s got to be Professor Pyg.

Professor Pyg is one of the newer Batman villains, debuting in 2007 with issue #666 Batman in Bethlehem, a future world where Damian Wayne is now Batman and has sold his soul to the devil. This is when we first get a glimpse of Professor Pyg who is hanging crucified and dead, without his mask, in a church. If that’s not creepy, I don’t know what is.

As I continued reading more story arcs and became a little more disturbed, more detailed points on why he is the creepiest emerged.

Let’s face it, he is a nut job. You can really see this during Grant Morrison’s Batman and Robin run, which tells the story of the declared “Year of the Pig” which Pyg and the Circus of the Strange make an appearance. He starts his campaign to make people perfect and once the Dollotrons captured Robin, we get to see how his mind really works. There are loony and psychotic characters but this takes the cake. He starts parading around talking about making things pretty. He says he’s an artist and can’t work on anti-psychotics but the voices in his head keep telling him he’s not doing good enough. He then puts on music, hates it, and just continues obsessively oinking. Bizarre yet? Some villains are eccentric but rarely are they actually mentally ill, Pyg – definitely is.

But the reason he is doing what he’s doing? He wants to make everything PERFECT. He is obsessed with perfection and wants to make things pretty, the Pyg way. To him the transformations are GLORIOUS, and he thinks he’s burning the ugliness away. In his case file, it is said he has survived an overdose of an unidentified neurotoxin which left him a brain-damaged schizophrenic with delusions that his procedures are actually making the people perfect. “Pain is the beginning of perfection,” he says, “Pyg will make you perfect.” “Pyg is here to make everything perfect.” Other villains want to cause harm, chaos, destruction, and they consciously know it. He thinks he’s actually making things pretty, and those faces are surely not.

On a visual level, he’s wearing a pig mask – which makes him so much more mysterious and so much creepier. It’s like imagining a butcher/surgeon/livestock combo, which wants to make dolls, perfect little dolls.

So Pyg not only is mentally ill, obsessed with perfection and wears a weird pig mask. He also wants to cause city-wide harm. When they are trying to release this addictive identity-altering virus to the people of Gotham, I am thinking to myself -- oh okay, another deadly toxin to spread around the city and endanger the citizens on Gotham City -- no, this creepy Pyg has his Dollotrons coughing and vomiting up this virus to spread it.

Last, but certainly not least, are the actual Dollotrons. These dolls are failed experiments and become his group of minions which he can mind control. In order to make a Dollotron he has to perform his special surgery on people to make them perfect “dolls.” Pyg kidnaps people but waits for them to wake up so they can feel the full pain of the surgery because “pain is the beginning of perfection.”

The transformation begins when he bonds the doll faces onto the people’s faces. He then performs brain surgery which lobotomizes them and supposedly does some “gender realignment.” Whatever that green gunk is, makes sure that doll face cannot come off.

So let me ask you, what other villain is creepier than that? To really get a grasp of Professor Pyg’s mentality check out: Batman #666, Grant Morrison’s Batman and Robin run, Damian: Son of Batman, Forever Evil, Forever Evil: Arkham War, and Batman: Eternal.