Perspective Swap: From Knob To Sophomore At The Citadel
Odyssey

Perspective Swap: From Knob To Sophomore At The Citadel

Here's what this school is REALLY all about. 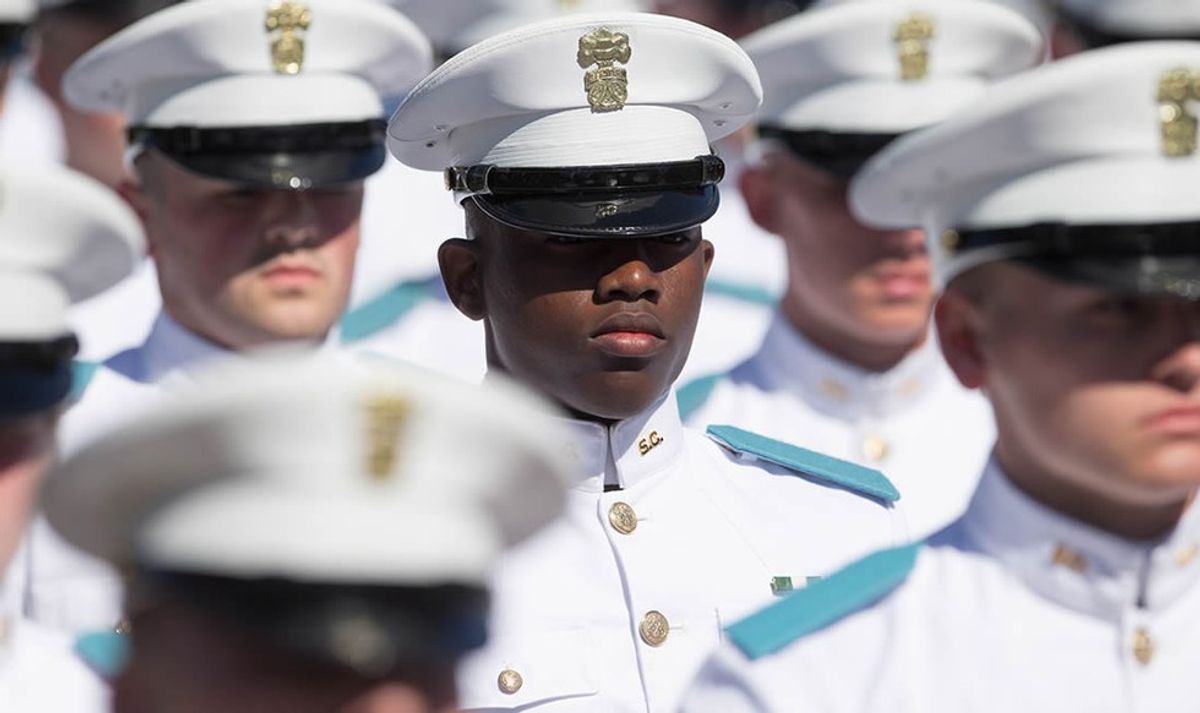 I don't really remember my Hell Week. Which is ironic, because I still remember everything my Squad Sergeant and Corporal taught me. Not quite sure how, but I assume it's just something The Citadel does. My Hell Week, shoot, my first semester was a blur. I remember bits and pieces, I remember Parent's Weekend, I remember the phrase "twenty pounds of crap in a five pound sack", which aptly describes that time period. I remember SMI's, and hating every single one (still do. 99% sure that carries through for four years). I remember being terrified of my PL, and all he said to me was, "Do you even care?"

But now, this year, I get to look at it from the upperclassmen's perspective. And knowing all that I do, all that I've been taught, and looking at this year's knobs, I can understand why they were hard on us. Not cruel. Nobody hazed us, but they set high expectations for us, expectations that I now feel, now wish, were higher, so I could have strove to be better and better. And it's so that I could set a better example for what this class should be, and what they should exceed. That's just how it is to me. There is never a point where something cannot be improved on. Simply because we are human.

I was called back early to serve as staff for cadre period, armorer to be exact. I got to watch Challenge Week, from the outside this year. And it was interesting to say the least. I didn't really see all of it, but what I did, I recall from my knob year. I was eager, well. I'll be honest. I was desperate to learn everything I could, to match the standards my brother had before me. I tried my best, and I put forth effort. This year.... I suppose I see those that do put in effort, and those that don't, far more distinctly than I did my knob year.

It's odd this year. From the outside looking in. Times change, so do the regulations. Some thing's stay the same, and I might have more to say on this later. I don't know how things were for my upperclassmen. I don't. I wish I did. I wish I made a better connection with my seniors before they left, in those final few weeks after Rec Day. I do. It's certainly odd not having them here.

I worry that the Class of 2020 won't appreciate that when they get it. I worry they won't understand the significance of that day, or Rec Day, because they're treating the 4C system like a joke, like it doesn't matter. Maybe this is how my upperclassmen felt about my class. I don't know. I don't know their opinion, and all I can write is my own. But I worry that the Class of 2020, is losing something, that made them whole. Perhaps I don't see it that well, I get to watch from the sidelines, and perhaps they are bonding together. Maybe they are meshing into that one unit classes are supposed to be.

If they are, then I have nothing to worry about. But if they aren't. If they don't become what my class was, or better than us. Then I will worry far more about the class of 2021. Because it will be the class of 2020 that teaches them. And then The Citadel will be nothing more than a college, that just happens to have uniforms and parades on Friday.

It will lose its brotherhood. It will lose its power to bond together cadets, regardless of religion, gender, race, whatever you pick. It will stop being the road less traveled, the moment it becomes a road that becomes one you can walk on your own. There is not a single day that I don't thank God I had my classmates with me. They are why I became what I am now. There is no doubt in my mind that I don't deserve this rank. There are better men, better classmates, that I know should have a higher rank than I do. And I know that it is because of them that I have what rank I do have.

This school is not built on individual achievement. Yes it celebrates it. Yes it encourages it. But when it comes down to it. When everything boils away, and you yourself can do no more, you will find that your bond with your classmates, your loyalties will get you through the day. You will recall moments in time, that you should have fallen, yet it was your buddy by your side that kept you standing. When your demons, regardless of what they were, chased you down and beat you to a pulp, and it was them that brushed them off, and helped you to your feet. That is what this school is about. It's about forging riftraft into men, woman and strong graduates of The Citadel, into those that stand by their friends sides, and regardless of what is to come, both protect and are protected.

That's what this school means to me. It's having 28 classmates that I can always rely on. That I can always go to with a problem, and they'll help me out as best they can. And if the Class of 2020 doesn't have that kind of bond, then to me, they aren't The Citadel Class of 2020. And they never will be. They will wear the ring, but they will not understand the brotherhood and the blood, sweat and tears that forge it. And maybe to my upperclassmen. I don't either. But that's my opinion, regardless of all else.