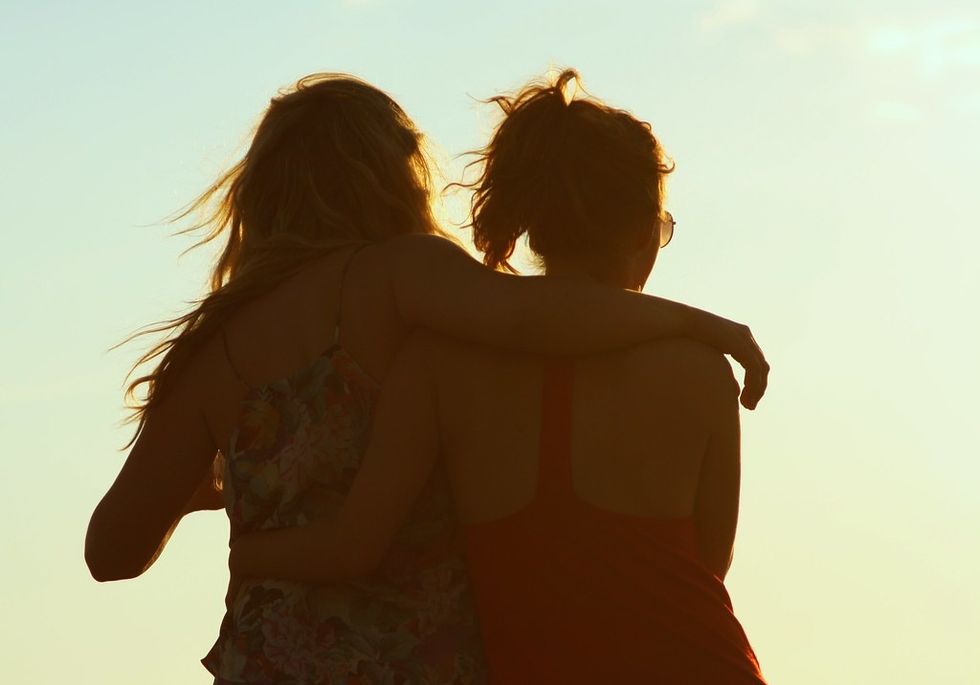 Our friendship started off innocently enough.

We were introduced at 6th grade orientation by another girl we had just both met. You were wearing a Harry Potter t-shirt so naturally, as a girl with relatively limited interests at the time, I struck up a conversation. After bonding over the popular wizardry franchise, I decided to follow you around because I was shy and afraid.

We got along well for the next 3 or so years.

We drove each other slightly mad at times, but no more so than any other honorary sisters - a name we had taken to calling ourselves. It wasn't until freshman year that I started feeling the itch to branch out and get other friends. Throughout those 3 years I was so focused on staying friends with you that I almost completely dismissed any opportunities for other deep friendships I may have had. After I expressed my desire to try and have more than one friend in my life, I was met with a very cold reception. I thus vowed to never again speak anything that could even be mistaken as ill of you, an undoubtedly healthy idea for a healthy friendship.

A few more years passed like this: I, holding my tongue at everything that might remotely rock the boat, and you, seemingly oblivious to my mounting dissatisfaction and resentment that can understandably come from being guilted by my best friend for winning a trivia game. It all came to a tipping point, however, when my now ex-boyfriend (don't worry, we're still great friends!) showed me that I was worthy of not only others' love, but self-love and self-respect. I was more than a doormat and a sheepish trivia winner, I was a human being, entitled to every part of the human condition, especially the good parts.

And so, I broke my promise. I talked to you about this.

About the immaturity, violations of privacy, and guilt-tripping that I had endured. We spent two and a half hours in the counseling office discussing it, and at the end I even consoled you. My intentions were pure; I wanted to fix our friendship. I loved you. I never wanted to hurt you, but you already had your mind made up about me. I was mistaken in thinking that you were oblivious. I was your shadow, but you were my reflection.

A few weeks of bitter silence later, I tried approaching you one last time, but I left with a couple of snotty tissues and a bruised knee (although that was unrelated - I hit my knee on the edge of the door in my haste to get out). I can't say I'm over it. Our society normalizes romantic breakups, but platonic breakups are almost never mentioned, despite often being more necessary.

I am not a martyr, a saint, or an angel, but I am also not the only one to blame for the end of this friendship.

As I said, I loved and continue to love you. I doubt that will ever change. I harbor you no hatred and I wish you no ill will. In fact, I wish you all the happiness in the world and I thank you for all the help you've provided me through the years. But ultimately I had to put myself first in this situation. I owed it to myself to be with positive people because, as they say, you are who you choose to be around.

Despite how low you made me feel, I refuse to be the victim of this situation.

I owe my new outlook on life entirely to you - nothing is ever as bad as it seems, so why not just keep my chin up? I'm way more positive and a lot happier now, and for that I am grateful. I believe a valiant Romulan commander put it best: "In a different reality, I could have called you friend."

A Letter To My Friend Who Replaced Me With Her Boyfriend

The Crucial Difference Between Pansexuality And Bisexuality

5 Things You Forgot To Thank Your Best Friend's Mom For