How GMOs will change the world 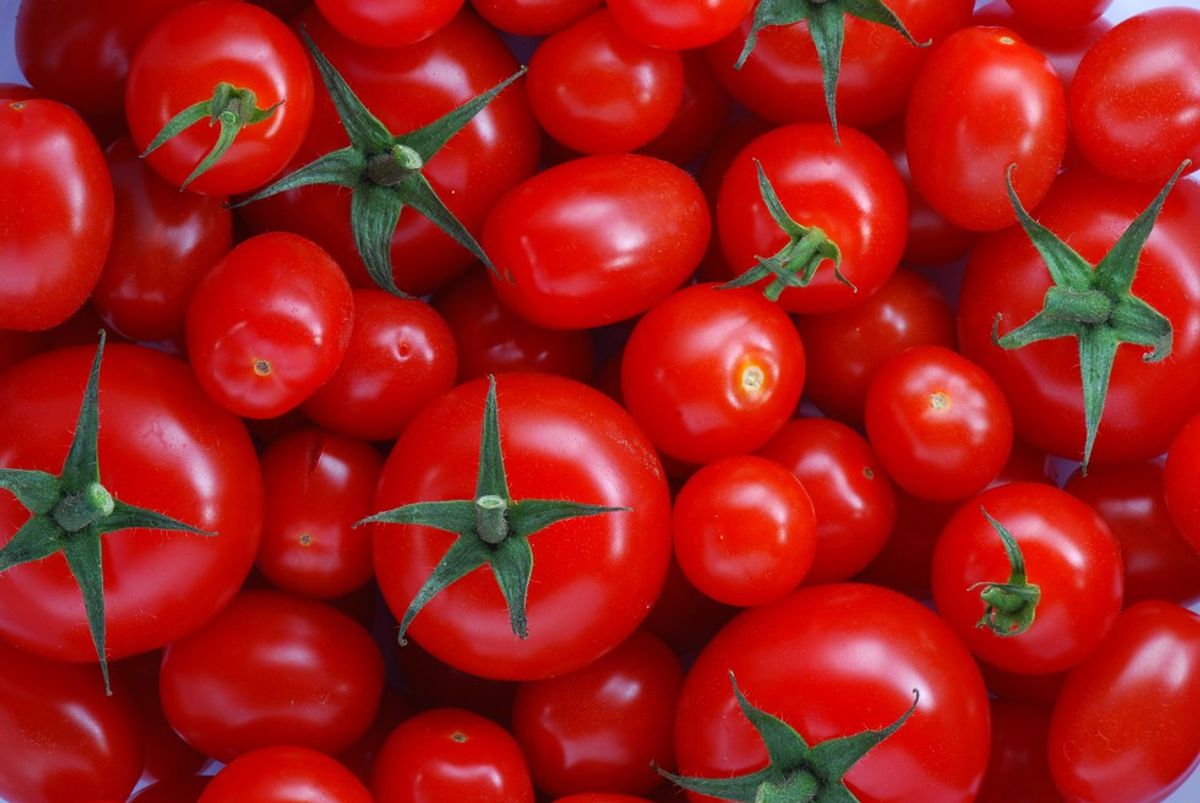 I hang bright red and plump among my brothers, waiting to be plucked from the vine. I’ll

eventually find my way into a salad, a greasy cheeseburger, or maybe even your

Monday night stir fry. I have travelled hundreds of miles and have not wilted. I have

endured freezing temperatures but have not hardened. My relatives have helped

themselves. I am feared by some and fought for by others. I am not your ordinary

produce as my genes have been enhanced and finely tuned. I am a genetically modified

tomato. I may be known as a GMO or a genetically modified organism; or perhaps you

know me as a GE food which stands for ‘genetically engineered’. Though many have

heard of me, many still have yet to get to know me. To define my existence some would

(Khan 6). Or in other words, a tiny piece of DNA taken from another organism has been

added to my genetic composition to give me advantages never before seen by man. In

unexpected spring freeze and nourish your families throughout the year. Genetically

cannot produce major crops due to pests or environmental changes; GMOs can even

GMOs often instill fear and outrage in populations throughout the world. Many

pollute the fields and supermarkets. Jimmy Botella, a professor of plant biotechnology at

the University of Queensland Australia, sheds light on the matter. Botella reminds his

audience that genetically modified foods have existed without controversy for quite

some time (Waiter...). For example, kiwifruit entered the supermarkets in 1959 after a

genetic alterations. On the other hand, what could be more natural than a banana

purchased from the fresh produce section at the grocery store? In reality, natural

and therefore, seedless bananas grow. The Pew Research Center suggests that a

AAAS scientists’ views on the subject. The Pew resource writes “a minority of adults

(37%) say that eating genetically modified foods is generally safe, while 57% say they

believe it is unsafe. By contrast, nearly all AAAS scientists (88%) say they consider

eating GMOs to be generally safe.” Many scientists who have studied and worked with

safe activity. Botella attempts to bring into perspective this so called ‘risk’ that may be

involved with consuming GMOs. He suggests that the riskiness associated ingesting

GMOs remains proportional to that of driving, crossing a street, or walking in the sun;

As the world population increases, a threat directed at food security begins to

loom over world leaders and the general population. Khan, author of "Genetically

Modified Organisms (GMOS): Food Security or Threat to Food Safety” in the Pakistan

hunger and malnutrition. But with the help of genetically modified organisms, world

hunger may begin to come to an end. Corn, for instance, is a historical staple

throughout civilizations, has been challenged with drought, pests, and noxious weeds,

but with genetic enhancements, corn may grow with very little water which would allow

the crop to survive droughts. Some organisms already contain attributes that repel pests

who have a reputation of destroying crops (The Benefits of Genetically Modified Foods).The more

means more food! With controlled crops, the likelihood of failed production and lack of

GE crops have also been enhanced to contain nutritional benefits. In a Ted Talks

head of the Department of Genetics and Biotechnology at the University of Ljubljana,

refuse to accept the production of golden rice. The Golden Rice Project states that “the

(VAD) every year lies at 1.15 million. Many more show VAD­ related syndromes, among

them loss of sight and increased susceptibility to a number of diseases.” These

problems can be solved with golden rice, a grain that has been genetically modified to

produce provitamin A (The Golden Rice Project). These crops do not contain the

Instead, genetically engineered foods may save the lives of those who cannot obtain

essential nutrients; however, the fear that surrounds the term “GMO” proves enough to

prevent the production and use of life saving crops.

herbicides and destroy soil composition. However, in an article in the Journal of

in the production of all crops. Insecticides barely brush the surface of GE

tomatoes, maize, potatoes and other genetically enhanced crops. Even the soil benefits

from ‘no­till’ farming which enhances carbon retention. The University of California,

and destroys viable land; however, crops may be genetically modified to have salt

tolerant traits. The University of California gives an example of a salt tolerant plant: “a

gene from the grey mangrove, Avicennia marina, has been genetically implanted into a

tobacco plant, making it able to tolerate salt stress as well as showing tolerance to other

ionic stresses.” By simply taking a gene from another organism, in this case a tree,

crops have potential to thrive even if farmers destroy agricultural land from over farming,

pollution and land clearing. GMOs not only reduce the amount of pollution that usually

supermarkets of the United States, I know others like me travel to feed the hungry. I

civilization. With genetically modified and enhanced organisms, a surplus of food begins

to feed the growing world population. In an interview with Mark Lynas, a once anti GMO

activist admits his change of heart occurred due to his occupation as a science writer.

As Lynas learned more about the GE market, he found that the benefits of genetically

enhanced foods stands equivalent to the evidence for climate change. He felt he could

not believe in one (climate change) and disregard the other (GMOs), or else there would

an inconsistency in his position. From feeding the hungry and curing the

nutritionally deficient, the benefits of GMOs greatly outweigh the skepticism and fear

that surrounds the term. Further research and development of genetically modified

foods will only propel the world into a healthier and more productive era.