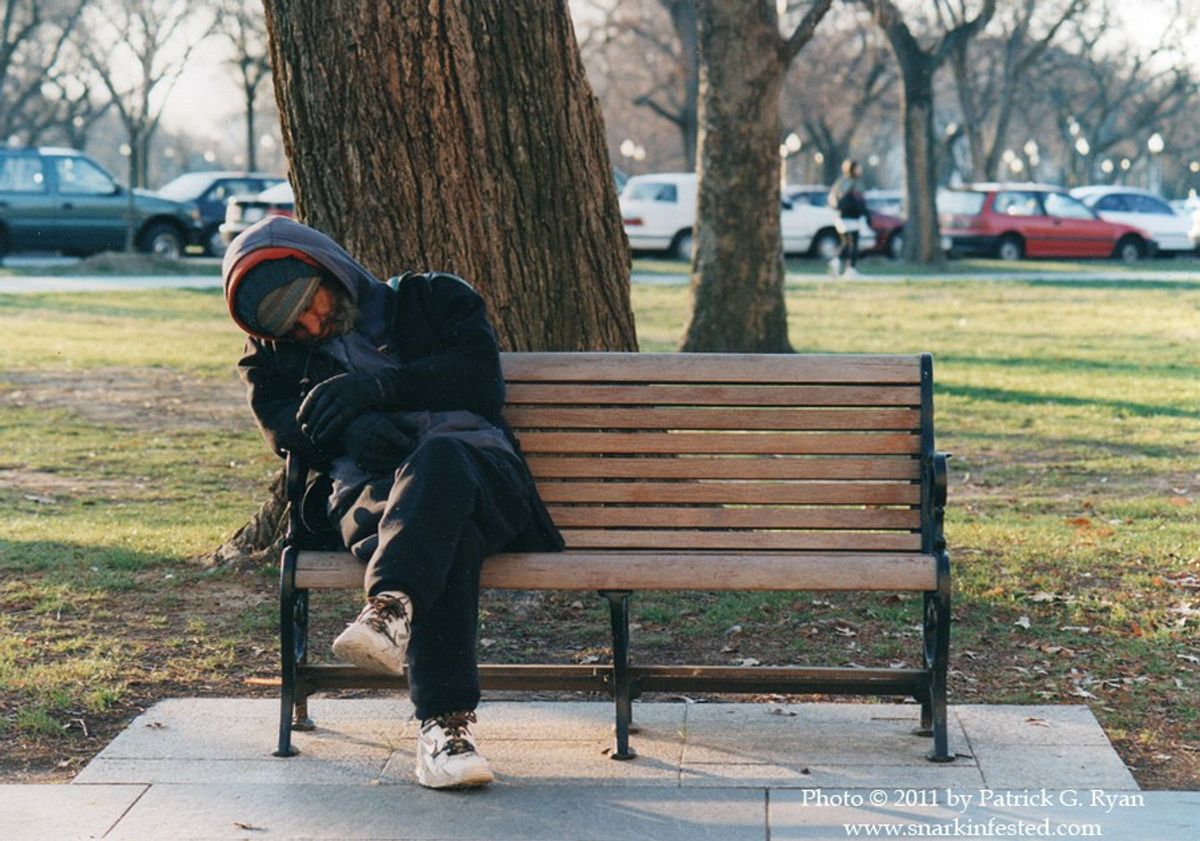 MYTH: Homeless people all live on the streets or in alleyways.

Homelessness is often thought of as a dirty man sitting in an alley, wearing ripped clothes and rattling a McDonalds cup for change. However, the best definition of someone who's homeless is actually this: Anyone who does not have a stable address. Homelessness encompasses a wide range of situations, including families living out of their cars, people living in homeless shelters, or people who rely on couch surfing.

According to the 2013 Annual Homeless Assessment Report, 65 percent of homeless people were residing in emergency shelters or transitional housing; unsheltered homelessness (living on the street) actually was in decline!

MYTH: Homeless people don't have jobs and are lazy.

It may be comforting to think that if you work hard you are guaranteed a stable place to live, and that with dedication anyone can make enough money to find secure housing -- that you deserve what you get. This, sadly, isn't the case. Partially due to the increased cost of living and meager minimum wage, it is entirely possible to have a steady job and still not have a steady home.

Many studies found that anywhere from one third to one half of homeless people already have jobs. The fact of the matter is, living paycheck to paycheck makes it almost impossible to save money -- especially when that paycheck is minimum wage, which can be as little as $7.25 an hour. Now add on the cost of essentials, such as food, clothes, washing those clothes, and gas or bus fare. And then consider the fact that many minimum wage workers do not receive enough hours to work the ideal 40-hour work week. Combined, making that $250/month rent check doesn't seem so realistic.

MYTH: Homeless people smell like urine, are dirty, and do not take care of themselves.

It’s a common assumption that homeless people are dirty; people without access to houses probably don’t have access to the showers inside them, right? As it turns out, there are more ways to get clean than to use the shower in your own home.

Remember those homeless shelters that 65 percent of homeless people live in? Most of them have shower facilities available to their residents. Some homeless people get a gym membership, which often gives them 24/7 access to showers, and some gyms such as Planet Fitness offer free food on certain days (all for $10 a month!).

People without these resources may choose to stay clean with a public bathroom sink, or moist towelettes from a gas station.

FACT: Half of homeless women and children are victims of domestic violence.

Family homelessness is the fastest growing homeless demographic, and on average the typical homeless family consists of a young single mother with two young children. These women overwhelmingly come from histories of domestic abuse, leaving their abusive partner and having nowhere else to go. Ninety-two percent of homeless mothers reported having experienced some type of physical or sexual violence, and children exposed to violence and homelessness are at increased risk for mental health disorders such as anxiety, depression, and Post-Traumatic Stress Disorder (PTSD).

FACT: Homelessness is becoming increasingly illegal in the U.S.

Under the guise of making towns more sanitary/aesthetically pleasing, many laws have been passed that target the homeless population. These laws criminalize life-sustaining activities being performed in public, and while they apply to everyone, they are disproportionately enforced on homeless people.

FACT: Homeless people who do fall into the things outlined in the first three myths are still worthy of respect and help.

When we talk about homelessness, we often try to say "Well not all homeless people are dirty and scary!" But what this tends to do is create a dichotomy: Good Homeless People and Bad Homeless People. When we create these groups of good versus evil, we decide that some homeless people are worthy of aid and attention, and others deserve to live in poverty and hopelessness.

The fact of the matter is, some homeless people do live on the streets. Some people don't have jobs. Some people are dirty, or have unkempt hair, or wear clothes with holes in them. Sometimes these are because the person doesn't have access to them, even though they want them. Sometimes people can't access them because of physical or mental disabilities. And sometimes the person chooses not to access them. The reasoning behind their situation should not affect our drive to help them, or help eradicate the systems that forced them into homelessness.